Buzzcocks’ Steve Diggle: “The harmony in my head was the sound of the crowd”

Their gritty 1979 single dissected in the new Uncut 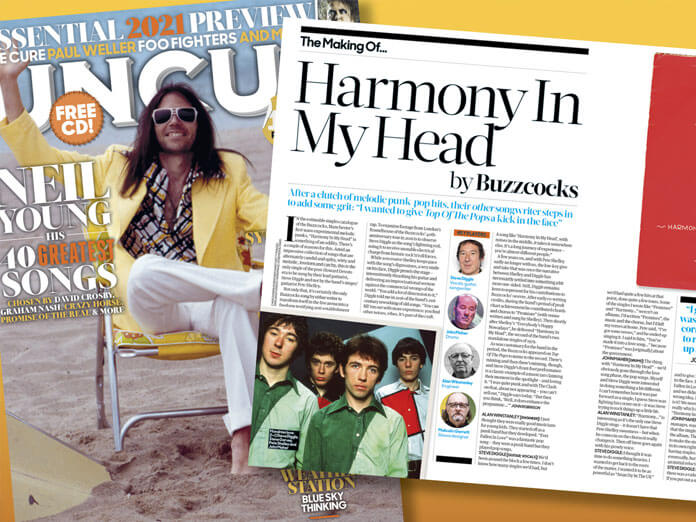 Amid a cornucopia of delights in the new issue of Uncut – in UK shops now or available to buy online by clicking here – there’s a deep dive into the making of Buzzcocks’ classic 1979 single, “Harmony In My Head”. Following a run of songs that were alternately candid and spiky, witty and melodic, lovelorn and catchy, it’s the only single of the post-Howard Devoto era to be sung by the band’s lead guitarist Steve Diggle and not by singer/guitarist Pete Shelley. Says Diggle, “I wanted to give Top Of The Pops a kick in the face”…

STEVE DIGGLE (vocals, guitar, songwriter): The songs were always there. It was part of the way of life: you got up, you wrote a song. If Pete had a song or if I had a song we’d do it very quick in the afternoon, get it done because the pubs opened at 5.30pm. It’s true! You could hear people in the next room, they’d still be rehearsing the intro to a song. We’d just written a hit single and would be on Top Of The Pops the next week! There was a lot of off-the-ball work went on between me and Pete Shelley – I think who he was came out in his songs, and who I was in mine. When you’re in your twenties, there’s a lot of internal searching.

JOHN MAHER (drums): We’d had a thing where every time we released a single we’d get on Top Of The Pops and that peaked with [1978 single] “Ever Fallen In Love (With Someone You Shouldn’t’ve)”. There was a bit of a reaction when we released “Everybody’s Happy Nowadays” [in 1979]. Lyrically it’s very cynical. Weirdly people perceived the singles which came out prior to that as these very poppy love songs – whereas the lyrical content if you dig into it, in a song like “Love You More”, is a bit darker than what people saw on the surface. “Everybody’s Happy Nowadays” was a period when things were going darker still.

STEVE DIGGLE: At that time having gone through the mill you sort of question your sanity. You start off in rock’n’roll thinking it’s all going to be easy, but it’s a tough road: the drink, drugs, the parties, the actual writing. You tie yourself to the mast like Turner and it all comes at you.

JOHN MAHER: Around 1979, Pete thought it was all getting a bit much and the fact that Steve came along with “Harmony In My Head”, it possibly allowed Pete to step back a bit. Pete would retreat into himself. These days we are better talking about mental health. I think I probably thought, ‘Pull your socks up, let’s get on with it…’

STEVE DIGGLE: “Harmony In My Head” was venomous. I was reading James Joyce’s Ulysses, which is a heavy book. But it had a lot of cinematic imagery – so “Harmony” wasn’t a linear story like pop songs are. The Arndale Centre [Manchester shopping centre, five years in the construction] had just been built and it gave me a real sense of alienation. I wanted to walk down the street and hear the percolation of the crowd – that was the harmony. Life was never going to be sweet and nice and it’s not always doom and gloom. The harmony in my head was the sound of the crowd. That’s how real life is.

You can read the full article about the making of Buzzcocks’ “Harmony In My Head” in the February 2021 issue of Uncut, out now with Neil Young on the cover and available to buy here.