Alice Cooper on The Stooges and MC5: “We were three different types of theatre” 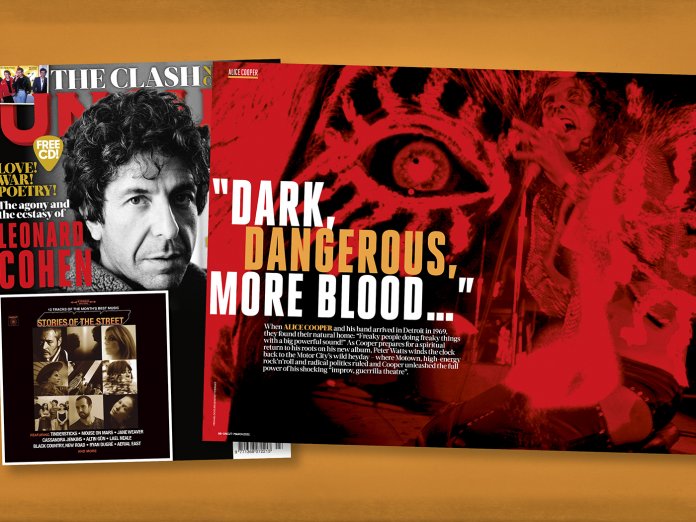 When Alice Cooper and his band arrived in Detroit in 1969, they found their natural home: “Freaky people doing freaky things with a big powerful sound!” As Cooper prepares for a spiritual return to his roots on his new album, the latest issue of Uncut – in shops now or available to buy online by clicking here! – winds the clock back to the Motor City’s wild heyday where Motown, high-energy rock’n’roll and radical politics ruled and Cooper unleashed the full power of his shocking “improv, guerrilla theatre”.

“Playing with Iggy and MC5 was great for us,” says Cooper. “We’d got so used to following Spirit or somebody like that. They were great musicians but didn’t have that electricity and drama. The MC5 were just pure Detroit. They were a little bit R&B, they were hard rock, they were politically charged and they were all such good musicians. The Stooges were so hypnotic. They would just sit there and they never got in the way of Iggy’s theatrics, who was as nasty as it got. I saw we could do something like that. Darker, dangerous, more blood, more force. The way that works is the band just attacks the audience, the band has to be merciless with the crowd. All those three bands – MC5, Stooges and Alice Cooper – worked so well together because we were three different types of theatre.”

Alice Cooper’s theatrics became legendary. The descent into the dark side began with the infamous incident at the Toronto Rock’n’Roll Revival, where a live chicken Cooper threw into the audience met a grisly end. Alice Cooper shows would later involve electric chairs, straitjackets and gallows. It was partly about survival, a way to keep up with the MC5 and Stooges. “The Detroit groups, I called them the Motor City Bad Boys, they let us into the circle,” says Alice Cooper bassist Dennis Dunaway. “We were very different but they accepted us. Playing in Detroit, we realised we had to get more energy into our music, which we did, but how do you out-power those bands? You can’t. So we decided to execute our singer.”

The feather pillow became Alice Cooper’s trademark. At the finale, Cooper would tear it open and guitarist Michael Bruce would spray it with a CO2 canister, covering the audience in feathers like an indoor snowstorm. “We played a lot of shows together and I saw the theatrical side of their band really emerge and blossom,” says Kramer. “They were trying to create as much theatrically dramatic chaos as they could. It wasn’t really dangerous. It didn’t scare you. It was crazy and wild and fun, but it wasn’t Iggy. He was really scary, dancing like a dervish, possessed. You never got the sense with Iggy it was for show. It was a way of life.”

You can read much more about Alice Cooper, The Stooges and MC5 in the March 2021 issue of Uncut, out now with Leonard Cohen on the cover – buy a copy direct from us here, with free P&P for the UK!