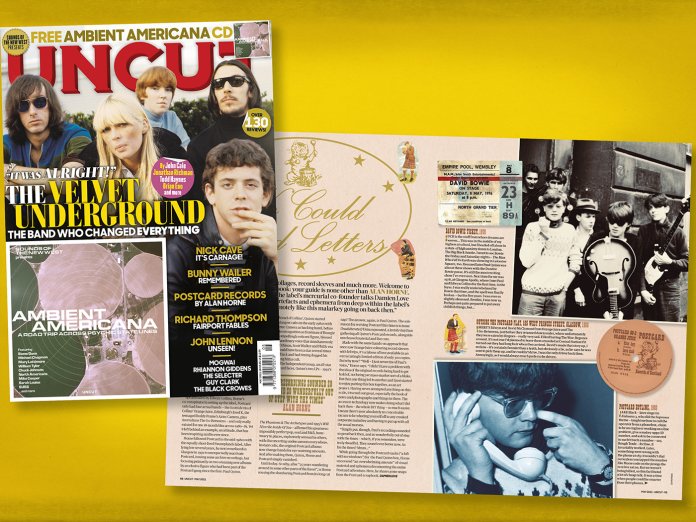 The current issue of Uncut – in shops now or available to buy online by clicking here, with free delivery for the UK – features a rare and exclusive interview with mercurial Postcard Records founder Alan Horne as he shares his personal selection of photos, artefacts and ephemera from deep within the label’s vaults.

The most inspirationally DIY of the UK’s original post-punk indie wave, Postcard was dreamed into life in the Glasgow of 1979 by Horne, then an ambitiously bored 20-year-old, who famously ran the business out of the sock drawer in his tenement bedroom. Under the banner of its impudent logo – the mischievous kitten banging a toy drum – Postcard was low on resources, audaciously high on insolence and ideas.

Spearheaded by Edwyn Collins, Horne’s co-conspirator in setting up the label, Postcard only had four actual bands – the Scottish trio of Collins’ Orange Juice, Edinburgh’s Josef K, the teenaged Roddy Frame’s Aztec Camera, plus Australians The Go-Betweens – and only really existed for one 18-month blur across 1980–81. Yet it left behind an example, an attitude, that has been inspiring misfits ever since.

Horne followed Postcard in the mid-1980s with the equally short-lived Swamplands label. After lying low several years, he next resurfaced in Glasgow in 1992 to unexpectedly reactivate Postcard, issuing some archive recordings, but focusing primarily on two stunning new albums by an elusive figure who had been part of the Postcard gang since the first: Paul Quinn. Instant cults, the original Postcard albums now change hands for eye-watering amounts. And after making them, Quinn, Horne and Postcard simply vanished.

Until today. So why, after “25 years wandering around in some other parts of the forest”, is Horne rousing the slumbering Postcard from its long cat nap? The answer, again, is Paul Quinn. The sole reason for reviving Postcard this time is to issue Unadulterated/Unincorporated, a lavish vinyl box gathering all Quinn’s Postcard records, alongside unreleased material and live cuts.

Made with the same hands-on approach that once saw Orange Juice colouring record sleeves with felt tips, it’s a labour of love available in an excruciatingly limited edition of only 300 copies. But why now? “Well – I just never tire of Paul’s voice,” Horne says. “I didn’t have a problem with the idea of the original records being hard to get hold of, not being yer mass-market sort of a bloke. But then one thing led to another and I just started to enjoy putting this box together, as an art project. Having never attempted anything on this scale, it turned out great, especially the book of notes and photographs and things in there. The access to technology now makes doing what I did back then – the whole DIY thing – so much easier. I mean there’s now absolutely no conceivable excuse to be whoring yourself off to any crooked corporate malarkey and having to put up with all the usual morons.

“Simply put, though, Paul’s recordings sounded so great back then, and so wonderfully out of step with the times – which, if you remember, were truly dreadful. They sound even better now. As for the times? Mmm…”

You can read much more from Horne, along with some of his snaps from the Postcard scrapbook, in the May 2021 issue of Uncut with The Velvet Underground on the cover – buy a copy here!