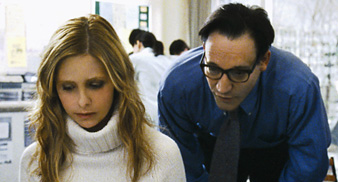 Why remake The Grudge?
My partner and I have set up this new company, Ghost House Pictures, and our goal is to make screaming rollercoaster rides of terror – outrageously scary types of films. So when I had the great fortune to see Takashi Shimizu’s original Ju-on The Grudge, which was so terrifying that it knocked my socks off, I thought that this would be just the perfect film to kick off our slate.

Japanese horror has a very different feel to US horror – were you ever worried that something might’ve been, er, lost in translation?
Well, yes, there is a difference there, and certainly Ju-on The Grudge has a kind of beautiful lyrical quality to it. But I never thought that would be hard to translate – it’s just like a different melody that the audience gets used to. And at the same time the thing that is incredibly universal is the fear of the unknown, and Shimizu is a great master at manipulating our fears in terms of what’s in the great darkness that lies just beyond. So I never thought there’d be a problem with the translation.

You always wear a suit on set. Rumour says that it’s a nod to Hitchcock?
Although I have a tremendous amount of respect for Alfred Hitchcock, who is the true master of horror and the father of much modern filmmaking technique, I don’t actually wear a suit as a tribute to him. Believe it or not, I wear a suit and tie as a sign of respect to the cast and crew. I like a very serious and well ordered film set – for me it’s the best way to work, and out of that order I like to get a tremendous amount of creativity. And at the same time, the old masters used to dress in a very formal manner on set, and I always thought that it was supercool. Nowadays everyone’s got the nose rings and the coloured hair, so for me to wear the suit and tie is a different way to go.

How much of Spider-Man’s success (both 1 & 2) do you attribute to your direction?
I don’t know if it’s my direction, or my love for the character and what he represents. Like, take Catwoman. My guess is that if the filmmaker really loved the character of Catwoman then it could have been very successful. I had a feeling though, when I saw the trailer, that it was a creation that originated with the studio marketers. And the funny thing is, around fifteen years into my career, when my movies weren’t making any money, I decided that I couldn’t equate my own personal success with financial success. I had to tell myself that I’m just going to make the best picture that I can, get into the characters and tell a story that I think is really interesting. So when Spider-Man makes a lot of money I can’t just go back and say, well, the rule is still true, except for this one case!