Patti Smith takes time out to chat to Uncut about her recent recordings, being American in this post-911 era, Todd Rundgren and more... 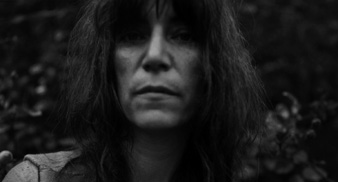 UNCUT: Of the records you’ve made since you “came back”, the first two – particularly Gone Again – are splenetic outpourings of grief and mourning. The mood of much of Trampin’ seems much more measured, reflective.
SMITH: The song that has the most outpouring of grief or anger in it is, I think,
Radio Baghdad. But a song like Trespasses, or Cash, I think you’re right, they’re not so much grieving songs, but they are the result of seeing things in life. Mother Rose, I wrote for my [late] mother but it’s more of a thank you to her, and also hopefully a really pretty song. It’s not a grieving song.

This seems very much to be a record about endurance.
Well that could be so. It’s been a long road, and I’m still walking on it. I think the idea is like the Pilgrim’s Progress or something. Life indeed takes us on what journeys it takes us on. It takes us to a lot of places we hadn’t anticipated. I think the record unfolds as much as life does. It starts out with Jubilee, which as it unfolded turned out to speak of my country at the present time. It’s the point of view of a mother or a woman or a strong person who is extolling the beauty of the land and the optimism and the young spirit of
her country but also the fact that there’s trouble brewing right now, there’s things that are not right. Our present administration has put our country in a very rough position financially and environmentally and, I think, psychologically.

Do you feel uncomfortable as an American at the moment?
I don’t limit my self image to being an American. I am an America, of course, but as a human being looking at our global situation, I feel a lot of anguish for people, I feel a certain amount of anger, I feel very very… I’m very opposed to the Bush administration and all its policies, it doesn’t speak for me. But y’know when I was younger, going to Europe during the Vietnam war, it was also difficult I was completely opposed to it, but being an American, people reacted to me as an accentuator of this war.

There’s that line in Rilke “I have my dead and I have let them go”. I was wondering how you feel about that idea in the light of the serial bereavements that you’ve suffered over the last few years.
I would probably say that I have my dead and I live with them. I don’t have a philosophy of letting the dead go, I don’t grieve for them daily, but they are always with me. Because my people include my late husband, my mother, my brother, my father, my best friend, my piano player – and many of them who died rather young. So they walk with me. Even the other day I asked my mother for counsel, and received an answer, y’know, within me. I think it’s important to let one’s deep grieving go because I don’t think it’s healthy for the spirit of the departed, but I keep my communication lines with the people that I have lost. Pasolini said a line that really impressed me, “it’s not that the dead don’t speak, it’s just that we have forgotten how to listen”. One could analyse it and say it’s just your subconscious speaking to you, but it’s my subconscious, it’s a part of me that has been instructed and raised by her. So it doesn’t matter where these impulses or these things come from, the fact is I felt close with her. And y’know, sometimes I need a laugh – I can feel my brother in my heart, he always made me laugh. So y’know I have my own internal universe in the way that I deal with these things, and I find that it’s much more helpful than being stricken, grief stricken, month after month, year after year, because you can’t be productive and you can’t conduct yourself in the way that people that you lose and who loved you would like to see you conduct yourself. There’s a song on the album called Trespasses and at the end the father, obviously, dies, the mother dies, and the son at the end takes up their deaths and takes up everything and the last line is he takes up this ragged coat, the symbol of their deaths and all the things done and left undone in their lives, whistling joyfully.

The album closes with Trampin’, a traditional gospel song.
I like Marion Anderson and I have a little space where I paint and take photographs and I often listen to gospel records and spirituals. That little song, for the past couple of years, has always attracted me, and I asked my daughter if she would learn it on piano. That’s my daughter playing and it’s live, we just did it a couple of times and took one that was honest. And that’s what we did. I’m very proud of her, I think she did a beautiful job. And I intentionally wanted it to have a modest approach, because it is a spiritual and I’m certainly not Marion Anderson. I intentionally wanted the song to have a very reflective, modest feel.

There is an ambiguity – in one sense it’s Samuel Beckett’s “On I must go on”, but there’s also a weariness about it.
Exactly. The reason that I liked it, it does have a weary quality but it’s optimistic. This person is trampin’ trying to find Heaven, they’re not just trying to get to the corner store, or just trying to get to a soup kitchen, they’re going for the highest place. I like the little song, and there’s a lot of miles tramped in this album, and I think it was a good way
to end it.

Now rock and roll is officially 50 years old, do you think it can still aspire in that way?
Rock and roll is a genre, it’s people who work within the genre; whatever is happening within the genre reflects the people who are creating and the needs or desires are of the people listening. I have great faith in the genre, and continue to work within it, but I wish that people would think about the greatest aspect of rock and roll which to me is its grass-roots voice that can embrace poetry and revolution and political situations, love; it embraces everything from a grass-roots level, but can be evolved as the person writing or [performing] the work. It can be as evolved as Jim Morrison or Jimi Hendrix or just as beautiful and pure as Darlene Love singing with the Crystals. I really think that the history of rock and roll has given us so much to be proud of, and so much to draw from and so much to aspire to, and I would hope that people would draw from that, and not merely the materialistic gains that one can get – the fame and the fortune and the exploitative aspects of it, and try to dig deeper into themselves and into our history and reconnect with the great aspects of rock and roll.

Patti on Todd Rundgren
[Wave] was a difficult record to make because we were out of the city, in the middle of winter in Bearsville, pretty much snowed in and I thought it might be the last album I did. I felt it was time for me to evolve as a human being. I hadn’t ever really planned to make records. I came to that organically, and I felt that I had really expressed everything that I knew how to express. So there I had a lot of thoughts doing that record: both joyful thoughts and….

Todd’s an old friend of mine, I thought that it would be nice to work with a friend and also he’s a great musician and I knew that he would contribute to the musical sense of the record. He was very good with using keyboards, he was a pianist himself and a lot of those songs evolved around that. It was not an easy record to make and Todd works very quickly – I work quickly too but not as quickly as Todd, but I think the sound of that record is beautiful.