Teenage Fanclub's guitarist and singer chats to Uncut from his Glasgow home. 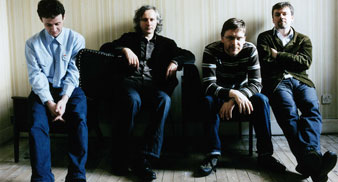 It’s a beautiful spring morning and Uncut is on the blower to the undisputed owner of the title ‘Nicest Man In Rock’. Guitarist/singer Norman Blake is in his usual bright and breezy self as he joins us from his Glasgow home for a chinwag as his band Teenage Fanclub prepare to release their beautiful new album ‘Man-Made’.
In the five years since last LP ‘Howdy!’ things have changed for TFC. The band’s deal with Sony/Columbia expired following the release of 2003’s best of compilation (2003’s ‘Four Thousand Seven Hundred and Sixty-Six Seconds – A Rough Guide To Teenage Fanclub’) and the new LP is their first release on their own label PeMa. And what’s more, ‘Man-Made’ was produced by post-rock veteran John McEntire (Tortoise, The Sea And Cake).

Why were there five years between ‘Howdy!’ and the new album?

“We did the compilation, which was a great way for us to bring to Sony deal to an end. We were down in the studio making ‘Howdy!’ And Alan McGee came and told us he was ending the label. He told us to finish the record and Sony would pick it up or we’d get paid off.
But Sony picked up the option for the two remaining records – they did the same with Primal Scream and Super Furry Animals as well. And you know, it did OK, but we were well down their list of priorities at the label and it kind of got lost. I don’t think they’re really structured to work with a band like us. We spoke to the MD and came to an arrangement that we would do a compilation, which was great ‘cos it meant we didn’t have to give them many new songs (there were three on the compilation). It was great for them so it meant they wouldn’t have to give us lots of money to make a new record. But we spent a lot of time and effort getting the artwork right. We had a battle with them about that too.
That brought us to the end of that, but because we wanted to do the compilation properly, we spent a good year on it. Then we toured that record, so before you know it there’s another two years gone!
We did the record with Jad Fair (2002’s ‘Words Of Wisdom And Hope’). That album was released on Alternative Tentacles! We were in San Francisco and Jello Biafra came to see us! We met Jello! I thought it was fantastic ‘cos I was really into The Dead Kennedys when I was younger and he was a brilliant guy. I just thought it was brilliant that this Glaswegian pop band ends up on Alternative Tentacles.
We toured the Jad record and that took up more time. We done some bits and pieces here and there, tried to keep our hand in. And we’ve been planning the label for a bit.”

So why go it alone? Can you explain how it happened?

“We nearly went with Domino, but to be fair to them, they did say to us ‘You can do it yourselves’. That was decent of them. It took us a bit of time to set up, getting a distributor and all the other things you have to sort out. We can now release what we want whenever we want. We’ve got a few things coming up, for example, at the live shows we’ve got a 7” single we’re gonna be selling, tracks we did with Jad Fair. Daniel Johnston’s going to do the artwork. We’ve got the freedom to do that, and we’re going to exploit that. We’re gonna do things like that, limited stuff which we can sell at gigs and on our website.”

And how does it differ from having to answer to a label?

“It’s a bit more exciting, getting back to what making records is about. We’ve built up different friendships over the years, which has helped us. It’s nice to be working with old friends. We’re back to where we started, we’ve got the control that it’s so difficult for bands to have nowadays. We’re much much happier. It becomes a bit soul destroying. You become product, there’s no art. That had gone for us for a period of time. “

So what does owning your own label entail then?


“Raymond (McGinley, lead guitarist/singer)’s been filling in forms for different collection agencies, generating bar codes, weird things that you have to do. We did a press trip last week, and we’re on the budget. We did the Ryanair’s all over Europe. I even had a hotel room that didn’t have any windows! Wasn’t far from being a prison cell. But we’re much more comfortable doing it like that anyway. With the first record Raymond sold a fridge and a washing machine his neighbour had left him, and we made ‘A Catholic Education’ from that. When we first went America we were skint, didn’t have any money. Drove around in a stolen car with false number plates and a hole in the floor. Totally busking it. We don’t have the stolen car anymore. But we’re getting things done.”

Any plans to release records by other acts?

“We’re fucking with someone else’s life if we get it wrong, so we’re aware of that. So we’ll experiment on ourselves first. Once we know the ropes, it’s something we’ll consider. Maybe not on a large scale, but a 7” or something. Hopefully we can get Franz Ferdinand to do it, sell a million, and that will set us up!”

Speaking of Franz Ferdinand, how do you feel about their massive success?

“I’m very happy for them. It’s about time. It’s been building up in Glasgow for about 10 years, it’s the culmination of a lot of work, from the likes of Belle & Sebastian, The Pastels, Mogwai, it’s really good that there’s a music community. People are pretty confident there. People abroad are very reverential about Glasgow. It’s kind of exotic for an American, this quaint little place.”

Onto the new album then – why record with John McEntire?

“We’d liked what John had done on the Stereolab records, so we got in touch with him. He was up for it, and suggested we come to Chicago. He did us a great deal on the studio, and put us up in really nice B&B round the corner. So we could afford to do it. When he was mixing things he would be pulling things out rather than putting stuff in. We just left him to it, generally we liked all the ones he did. It was a really easy process.
We hardly took any equipment, just some guitars and a pair of drumsticks. We even borrowed a guitar from Jeff Tweedy. We know him from way back, when we played shows with Uncle Tupelo. I’m glad we did, otherwise we’d have been fucked. We’d have had to buy one! Chicago’s a great place.
We wanted to concentrate more on the performances. We recorded it all in 5 weeks. We went back in the summer and mixed it, while Euro 2004 was on. Seven weeks, recorded and mixed.”

What are your plans for the future?


“Touring, as much as we can. We want to go to places we haven’t been before. Then we’ll just see what happens. Once we pay the studios and our tax bill we can make another record – either that or we’ll be going to jail for tax evasion! Either of those scenarios could happen. As long as we feel like we’ve got something to contribute then we’ll do it. But people still seem to be interested. We’ve never really looked further than six months ahead. We’d rather just keep doing that. Although we’d like to do a B-sides/rarities collection at some point.”


How do feel about all the goodwill you’ve received?

“It’s great that people say they like what we’ve done and that we’ve influenced them. I think people would raise their fists for us!”