Uncut catches up with Jack White and Brendan Benson from US supergroup, The Raconteurs 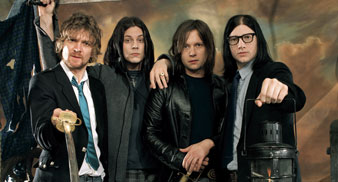 UNCUT: How long have you known each other now?
JACK WHITE: I think all of four of us probably met around the same six-month period, back in 1998.
How does it feel to be playing in a four-piece band, Jack?
JW: Great. I haven’t been onstage with more than one other person in years. Last time I was in that situation was when I was in The Go in Detroit for about six months, and we never played to more than a hundred people.

What prompted you to get together in the first place?
JW: Brendan said, ‘I’ve got this song that needs some lyrics’. I took a listen to it and it was the music for “Steady, As She Goes”. So I wrote the lyrics for it and we recorded it, though it was kind of more reggae-sounding at that point. We really loved it and just kept playing it, so we said, ‘Maybe it’s time to do this band we keep talking about’. That song really was the trigger.

The subject had nothing to do with your marriage, Jack?
JW: No, it was long before that. A year before, I would say. But it’s asking a question, which is, ‘Is doing that – getting married and settling down – starting a new life or is it giving up?’

Are you raconteurs?
JW: I thought yeah, it’s something I’ve always tried to do songwriting-wise. And it’s hard to do, because it’s hard to sneak it into songs, to get away with something like “Frankie And Johnny”.
BRENDAN BENSON: I would love to think of myself as a raconteur. It sounds very sophisticated.
Is it liberating playing with a proper rhythm section, Jack?
JW: When we started working, I knew I didn’t want it to sound anything like The White Stripes. The easy way was to say it’s not going to have any of the constrictions that The White Stripes have. We were gonna take all that boxing-in away. So that helped 90 per cent of that.

Is there something of The Stooges here that you can never achieve with Meg?
JW: There were tons of things like that, like synthesizers and guitar solos. It’s hard with The White Stripes when I put a guitar solo on something like “Black Math”, I’ve got to stop playing the riff and try to play them both at once. You think, ‘It sounds cool now but I hope it sounds cool live when we finally do it’. With these songs I knew I’d be able to do it, whatever we did.

In some ways it seems like an unlikely alliance – powerpop meets gothic punk blues.
BB: Stylistically I guess we’re different, but we both love the same music. I love The Stooges, though I don’t write songs like The Stooges.

What inspired the organ sound for “Store Bought Bones”?
JW: I’m a big Jon Lord fan, and you don’t hear organs with that grunt and that crunchy sound anymore.
Jack, you’ve said that “Brendan is a lot more song craftsman”, whereas you’re “more emotional and from the hip”. Do you agree with that, Brendan?
BB: Yeah, he’s more commercial, I’m more indie. [Laughs] Yeah, I might agree with that.
JW: But we’re also learning that people think something sounds like Brendan or sounds like me, and in fact it turns out it was the other way round. On “Store Bought Bones” Brendan played slide, which is always the first thing I would normally go to.
BB: It’s like a guessing game with this record, which is why we didn’t say who did what on the artwork. For me it’s been especially exciting to try new things and get away with them. I could do impressions – do Jack, or write a riff that I would never normally write.

Is it a holiday?
JW: It is, yeah. When we worked on Loretta Lynn’s album it was enjoyable but it wasn’t necessarily fun time. I mean, we had to go to work, there was a job to be done. Whereas when we started this band, there was no, ‘This is gonna be a soul band or this is gonna be a big rock band’. Nobody said anything about anything we were gonna be.

There are songs here that could have been on a Brendan Benson album and maybe songs that could even have been on a White Stripes album. Then there are tracks that really feel like you guys meeting halfway.
JW: I had not one note of any song that I brought to the table, although the main organ riff on “Store Bought Bones” had sort of started life as something for Satan. Brendan had a couple of things that didn’t have middle eights or didn’t have lyrics. I think “Together” was a song that he had one line for, and maybe “Hands” also.”

The harmonies on “Hands” are straight off Revolver.
JW: When we started the band, I knew that one thing I definitely wanted to do was two- or three- part harmonies, which I’d never been able to do. Meg had done a little bit here and there, with “Little Ghost” and stuff like that, but we almost kind of kept it just for our country songs.

“Broken Boy Soldier” is a great title and a great phrase. Is it a song about masculinity in general? Or about bands, perhaps?
JW: I guess it was about breaking out, like it’s time for everybody to grow up, kind of thing. There’s a feeling when all your friends are musicians and nobody has a real job, you wonder how long this is going to last and how long it’s going to be before people start… not getting a real job necessarily, but treating people with respect and acting more responsibly. That was the second song we wrote, and that’s when I knew things were going to get interesting.