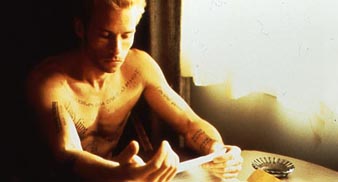 UNCUT: You once described it as an “exhausting” film. Quite an unorthodox pitch?
NOLAN: Yes, but if you’re putting the audience though such an experience then the trick is to let them know, on some levels, what they’re getting into. So that they don’t get frustrated with it and with you. Leonard sees himself as a perfectly reliable narrator. You’re sitting inside his head and seeing things from there. Then you realise things might be quietly different…At home, on DVD, you can watch it at your own level of concentration.

Are you a fan of DVD packages?
Very much so. This is a classic case. I believe there should be a definitive version of a film, but the wonderful thing about the DVD format is that it allows you to see it in different ways. You get access to fresh areas here. The film itself should always stand the way it was made, but it’s good to explore dense narratives and fresh devices. Remember how long ago Orson Welles made Citizen Kane, and how daring and experimental it was – and how shameful it is that film-makers haven’t really built on that in the medium as much as we should have.

How tough was it to play Leonard?
PEARCE: What I responded to was his emotional plight. Convoluted as the story might seem, it’s very clear emotionally. Obviously while filming I was wondering if everything was going to make sense, but I figured I could forget about that because Leonard’s lost his memory anyway…! Chris draws you into the film beautifully. He’s got a great brain and a great knowledge of film history. This finished film was closer to the original script than any other I’ve worked on – even L.A. Confidential needed some editing and cutting. So I hardly did a thing, to be honest! I heard the tune Chris was trying to sing and I just had no question. People always ask me if it was my most difficult job… it was my easiest.

You did have plenty of crib sheets!
Yeah, the only troublesome part was remembering which bloody notes were in which bloody pockets, and which pocket the camera was on, and which tattoo was where, and all that stuff. But I got a routine going pretty rapidly. I’m usually a control freak, which makes my work harder, but here I realised the best thing was to let go.