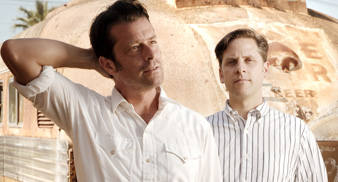 Q&A with Joey Burns and John Convertino of Calexico

UNCUT: How did you approach this record? For Garden Rain you had the whole band recording at once.

JOEY BURNS: We just wanted to not think about what we were doing, or have as many people involved. We had a great time doing the last record and it was an important one to make, but with this one we just wanted to gradually go in and start rehearsing, building ideas up over time. We actually made a deadline, and without it, we wouldn’t have finished. It’s like taxes.

JOHN CONVERTINO: We wanted to get back together with Craig Schumacher. With Garden Ruin we wanted to see what would happen if we worked with a different producer. That was fun, and we were able to achieve what we wanted, which was to streamline the songs. We learned a lot. With this one we were thinking, ‘Let’s take that experience and mix it up with what we’ve been doing prior to that.’

Of all your albums, Garden Ruin sounded least like what people think of as being Calexico.

JC: I think so too, and that was what was exciting about it. In all the years I’ve done recording, I’ve always had a hand in dealing with the drum sound, and being really particular about it. With that record I just said, ‘You guys do whatever you want’.

The press notes suggest Carried To Dust is a concept album about a writer heading off the map during the Hollywood writers’ strike.

JB: The album was written at the time of the writers’ strike, but there are many themes, many subplots and connections going on here. Maybe more so musically than in the lyrics. Although believe me, I’ve been scanning the lyrics to see if there is any kind of overall theme. The idea of a writers’ strike is interesting. It got me thinking: there was a dark period in American late night television: we need this humour, we need this release from the daily news. We were without this safety valve.

Is there one character throughout the songs, or is that taking it too far?

JB: It might be taking it too far. It depends on the day.
What about literary influences? Previously you’ve alluded to Cormac McCarthy and Lawrence Clark Powell.

JB: After working with Sam (Beam) from Iron and Wine, he turned me onto this American poet, who actually lives in Arizona, Norman Dubie. I’ve been enjoying his poems a lot, and going to them for reference and for different kinds of wordplay, and meanings. Two Silver Trees is definitely influenced by his poetry. He’s got a great collection called Mercy Seat.

The lyrics seem less pointedly political than on the last album.

JB: That is true. I felt like we had done that, and that era is coming to an end. Some of these themes still run inside these songs, and they’ll always be there, because I don’t think you can escape it. But it’s not trying to make a grand statement, or attack anything as large as two terms from the Bush-Cheney administration. These are more introspective times, and I’m fascinated by the stories from our travels down to South America. For the song Red Blooms, my eldest brother John and I were talking about this news item about ‘snowdrops’, who are people who go missing during the winter in Russia. They fall in the snow. The snow piles up, and everyone is praying they are found. It’s a beautiful metaphor for transformation.

Do you feel restricted by people idea of Calexico as a South-Western band?

JC: We have this regional quality to our music which caused writers and even our fans to lock us into this region, and the desert. But when you listen to the record there’s a lot of references to the ocean. Both Joey and I grew up near to the ocean – he the Pacific and me the Atlantic. It’s just amazing when you get to the sea how that changes the way you think and feel about so many things. It’s interesting for a band that’s seemingly landlocked to the desert to have this feel coming across that’s really aquatic.

JB: Rare is the occasion where people really understand that this band started off encompassing many different world cultures. It really is an eclectic thing. When we played shows with Beirut and A Hawk and a Hacksaw, with their use of accordions, I felt such a connection with it, because we had started off with accordion polkas and waltzes. Both John’s dad and my grandfather played accordion, and passed their instruments on to us.

JC: Joey and I have a real similar background, growing up in the Sixties and having a lot of music in the house, but I think our parents are really connected to that Depression era. My grandfather was an Italian immigrant, and they didn’t have much money. I remember my dad telling the story of him playing the accordion and my grandfather passing the hat around. It’s romantic, but it’s really important to keep that spirit alive, that feeling where music is happening in the moment.

There’s a strong sense of dislocation on Carried To Dust.

JB: That’s good. I like dislocation. I often find myself writing about that. I think, as people, we’re trying to get to something, and we’re always looking for that essence that is going to carry us through. You can apply it to anything: love, your job, or your goals, your life. Or just seeing somebody pass by in the street and trying to find them. I’m in Paris, so Amelie comes to mind. Another theme that comes up a lot in our music is the need to preserve nature, the environment, resources. Urban sprawl. And having grown up in the western part of the United States there is a lot of nature surrounding much of the population. Through this avenue I find a lot of inspiration for writing; and how characters find their balance, or their perspective of meaning, and how it all makes sense.