With her amazing new, mainly instrument-free, album Medulla about to come out, Sarah-Jane speaks to Bjork in Iceland. 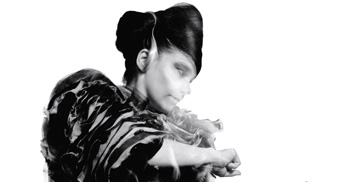 Uncut: Medulla was recorded in eighteen different locations including New York, San Francisco, La Gomera, Venice, Reykjavik, Salvador and Chateau Marmont.
Bjork: It sounds complicated, but it was actually really simple. I had an engineer with me most of the time and we just set up a portable computer wherever we went. Ninety percent of this album was probably recorded in bedrooms and hotel rooms between cooking and talking and chilling out with mates. It wasn’t until the mixing stage that we actually went into a fancy studio and started messing around with Pro Tools

What inspired you to use the timbres and textures of the human voice as the main instrument?
It wasn’t planned. With Vespertine and some of my earlier albums I set myself certain goals and objectives, but with this album the only plan was to do what I wanted and have total freedom. I started laying down some beats and melodies with Matmos, but for some reason they just sounded flat and one dimensional. It wasn’t until I stripped the songs down to the raw vocals that I realised they worked better without the instruments. After that, I decided ‘Fuck strings and synthesizers and sixty piece orchestras, I’m going to make an album that’s made entirely from voices’.

Both ‘Vokura’ and ‘Where Is The Line’ sound so layered and dramatic, they verge on operatic…
I kept hearing ‘Bohemian Rhapsody’ in my head when I was editing those and I think they have the same epic playfulness. I don’t know if other people will detect the humour, but I think they’re both really funny songs. There’s something impressive and ridiculous about them.

Mark Bell, Mike Patton, Robert Wyatt, Japanese accapella Dokaka, Inuit throat singer Tanya Tagaq Gillis and human beatbox Rahzel all guest on the album.
Yeah, they all fell into place one by one. I’d already worked with Tanya and Mark Bell on the Vespertine tour and Mike Patton introduced me to Dokaka and Rahzel. When I realised the album was becoming a vocal record the musical fascist in me decided using any MCs or vocal percussionists would be too cheesy. I changed my mind when I saw Rahzel freestyle a whole Kraftwerk track without pausing for breath. He came to the studio to lay some beats a few days later and ended up singing on the whole album. Everytime he tried to leave I’d beg him ‘Just one more, just one more!’

The beats on ‘Who Is It’ sound so deep you could mistake them for Aphex Twin or Autechre.
I know, his noises sound so electronic Warp should commission him to do a covers album. Amazingly, ‘Who Is It’ was the first track we recorded together. He just walked into the studio, picked up the mic and did it in one take.

Did you encourage the other vocalists to improvise as much as possible?
I used different methods with each person, but I encouraged everyone to express themselves and imagine they were a human drum loop or bassline. I also got the Icelandic choir to pretend to be insects and birds and other ancient creature. The difficult job was sitting at the computer afterwards deciding what to edit. I had so much material I’d say 80% of the time spent on this album was pure editing. Sometimes I just needed to swap chunks around, other times I had to add vocals from one track to another or strip everything down to a couple of notes. As much as everyone delivered live performances, there was a lot of weaving and layering needed to bring the whole album together.

What was it like working with the legendary Robert Wyatt on ‘Submarine’ and ‘Oceania’?
Incredible. We set up a little system in his home studio, recorded a couple of tracks, then stayed up all night talking and drinking red wine. He played me some amazing bebop Sun Ra recorded in the early 60s and I deejayed some DAF and Brian Eno tracks from my laptop. It was a wonderful experience and I feel very lucky to have met him and his wife Alfie. They’re both really talented people that have created their own little universe away from the world.

One of the recurring themes throughout the album seems to be the quest for love.
I wasn’t aware of that when I was recording it, but I guess ‘Triumph Of A Heart’ and ‘Pleasure Is All Mine’ are about love. The rest of the songs are about ancestry and trying to go back to the core of civilization before religion and terrorism and George Bush. Living in New York post 9/11 I was repulsed by the racism and patriotism that swept through America and the way I survived it was by encouraging my friends to switch off their TVs and stereos and just sing together. One of us would do the beat, another the bassline and so on. It sounds naff, but it felt very liberating.

You lived in London for a large part of the ’90s. Do you ever miss it?
Definitely. I miss the music, the people and the feeling of acceptance. When I was a teenager in Iceland people would throw rocks and shout abuse at me because they thought I was weird. I never got that in London no matter where I went or what I wore. The English press were also the first to embrace The Sugarcubes. I don’t know where it stems from, but I think the English have a real appetite for difference and eccentricity.

Do you ever dig out your old Sugarcubes records?
Occasionally when I’m feeling sentimental. The interesting thing about compiling the Family Tree box set was that it made me realise just how much material I’d produced over the last decade and a half. Some of it sounds a little old and musky now, but most of it still sounds quite fresh and exciting. Like others artists, I sometimes fall into the trap of doing what I think I should be doing rather than what I want to be doing and listening to my back catalogue reminded me I should just follow my heart and be spontaneous.

Medulla is released 30 August on One Little Indian.