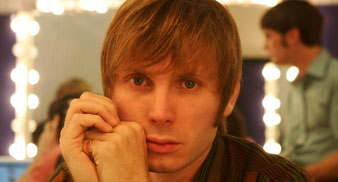 UNCUT: Did you have a masterplan for the second album?
ALEX KAPRANOS: A lot of bands these days stay on the road for two years, and it kills their enthusiasm, so we deliberately kept the tour very short. We didn’t want to end up turning into our own covers band. But those ideas about us having a manifesto are a bit exaggerated. Most of it’s actually done instinctively – like deciding to change the title of the record. Right at the beginning we decided that we wanted to be a pop group coming from an art background. But we didn’t have a manifesto about how we were going to be a pop group. Likewise with this record we decided we didn’t want to repeat ourselves, although we didn’t say exactly how.

How did you come to work with Rich Costey?
We bumped into Rich last year and he seemed like an interesting character – he’d worked with a diverse range of artists. It wasn’t so much a question of trying to make a purely rock record, it was more an attempt to capture how we sound as a raw band when we play live. But, yeah, songs like “The Fallen” or “Evil And A Heathen” are more full on than anything on the last record.

There seems to be a tension on the record between ambition and greed…
I suppose the character in “This Boy” is like that – cold and calculating. I think I’ve always been fascinated by those characters. They stand for everything we despise, yet they’re intensely charismatic. You find yourself laughing at their jokes even when you hate yourself for doing so. As for the title and the attitude of the record, it’s more a case of not sitting back and being satisfied. It came from reading about Harold MacMillan – you know, “You’ve never had it so good”. I’ve always despised that kind of smugness.

How has the group changed on this record?
When we recorded the first record we’d only played about 20 concerts together, with this one we’ve played about 300. Where before you’d have to talk about what you wanted to do with the music, now it just kind of happens. It’s almost like you’re working with telepathy. And you get beyond the cumbersome restraints of everyday vocabulary and reach this purer form of expression.

Did you have any qualms about writing a song about “Eleanor”?
Oh Eleanor is a wonderful name! Some of my favourite songs have Eleanors in. “Eleanor Rigby”. “Eleanor” by the Turtles. That has that wonderful line, “You’re my pride and joy, et cetera”. Am I asking for press intrusion into my private life? Well, I don’t have to answer any of the questions about it!

Was there any pressure to take out the lines, “Who gives a damn about the profits of Tesco”?
Nobody’s mentioned it. I’m sure Tesco have a good sense of humour!