In praise of Nicolas Cage in Joe

For a time, both Nicolas Cage and filmmaker David Gordon Green have separately been drifting away from what they do best. Joe, however, reminds us what both men are capable when the gears are shifting in the right sequence. 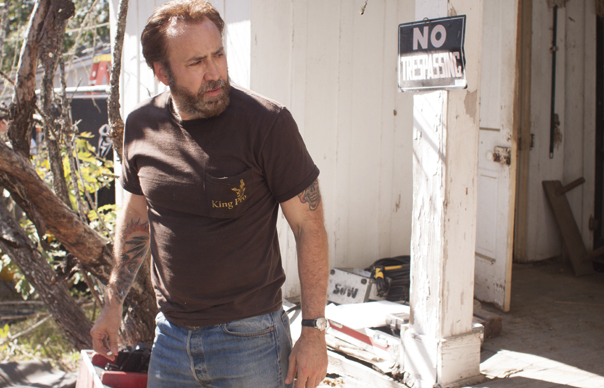 For a time, both Nicolas Cage and filmmaker David Gordon Green have separately been drifting away from what they do best. Joe, however, reminds us what both men are capable when the gears are shifting in the right sequence.

Cage’s Joe is a decent but no nonsense supervisor of a crew working in rural Mississippi; he drinks, which isn’t a good idea. When 15 year-old Gary (Tye Sheridan) shows up looking for work, Joe takes him in: inevitably, he sees something of himself in the boy. Gary’s father is a violent alcoholic (actor Gary Poulter was living rough on the streets of Austin, Texas when Green cast him; it’s a chilling performance, but sadly Poulter died shortly after filming). There is more violence, too, in the form of Willie, a local with whom Joe has an unspecified beef in the past. What Cage does here is brilliantly reign in his most extreme tendencies, so that this is a very internalised, but all the same very intense performance. He’s not been this watchable for years.

As a promising young filmmaker, David Gordon Green earned favourable comparisons with Terrence Malick for his early films, George Washington and All The Real Girls. A left turn saw him set aside earthy lyricism and loose narrative in favour of lowbrow comedies like Pineapple Express. What might first have appeared a pragmatic business decision on Green’s part felt less convincing as he plateau’d with Your Highness and The Sitter. Perhaps in response, Green threw back to his earlier films with last year’s Prince Avalanche – an intimate two-hander set in an isolated stretch of central Texas after forest fires have ravaged the region.

He continues to explore this lo-fi terrain here, weaving an intriguing, multi-layered story around people living on the fringes: violence and alcoholism are rife. It reminds me, to some extent, of Mud: another Southern story about a fundamentally decent though compromised man taking a wide-eyed protégé (also played by Sheridan) under his wing. Just as Mud was a critical part in reinvigorating Matthew McConaughey’s career, one can hope that Joe helps reconnect Cage with the qualities – and films – that made him such a compelling screen presence in the first place.