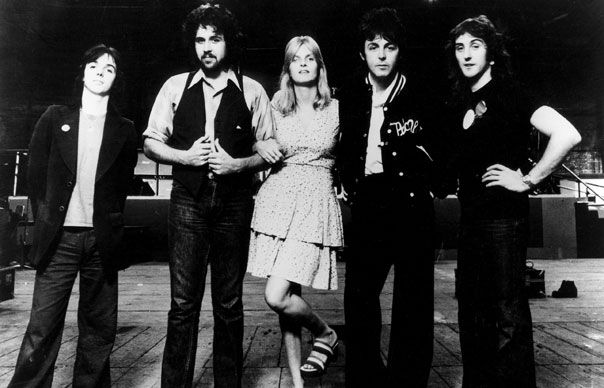 In this exclusive interview from Uncut’s June 2007 issue, the Beatles legend recalls his controversial time as leader of Wings. “It was a strange period,” he admits… Interview by David Cavanagh

March 15, 2007. Soho Square is bathed in buoyant sunshine as a few lunchtime stragglers drain their lattes and wander back to work. Between azure sky and coffee aroma, the only affront to the senses comes from workmen entrenched behind fencing, cacophonously digging up the road. “Replacing London’s Victorian Water Mains”, read the signs around the square.

Sir Paul McCartney emerges from his second-floor office overlooking the road works and steps into a cluttered reception area. He’s wearing a white shirt and grey trousers with pin-sharp creases. His hair is a discreet older gentleman’s brown – his stylist would know the exact shade – and his manner is quizzical. He squints at his young publicist, pretending not to recognise him. Then he turns to me, gesturing towards his office with a thumb. “Are you comin’ in here, then?”

Bright and airy, the office contains an executive desk on one side, and some chairs and a chaise longue on the other. There’s a table where an interviewer from Uncut can rest his coffee-mug and tape recorder. A piece of abstract expressionism by Willem de Kooning adorns the far wall. In a corner stands a beautifully preserved Wurlitzer jukebox, all sleek contours and strawberry-pineapple fluorescence. The workmen’s drilling intrudes through an open window. McCartney presses a button and Presley’s “Hound Dog” drowns it out.

At this moment, his estranged wife, Heather Mills, is somewhere across London, engaged in a hectic itinerary of TV and radio appearances that will dominate tomorrow’s newspapers. Teams of highly trained showbiz correspondents will dissect her cryptic claims regarding the McCartney divorce. (“There are huge powers. I don’t have that powerful system he has. There is a huge agenda about trying to destroy me.”) As if oblivious to her activities, McCartney seems presidentially calm this afternoon. But not even presidents can stop the passing of time. He’ll be 65 on June 18. You’re struck by the facial gauntness and the husky cracks in his voice.

We’re here to talk about Wings, the band he led from ignominy to record-breaking glory in the 1970s with his intrepid but musically L-plated wife Linda. However, he also slips in a mention of an imminent new album, his follow-up to the well-received Chaos And Creation In The Backyard (2005).

“I bought a mandolin,” he explains. “It isn’t tuned like a guitar, so I didn’t know my way around it. But the feeling of picking my way through, and finding chords, was magic. It was like I was 17 again. I remembered – this is what it’s all about. It was like me and John [Lennon] learning piano. You play, and then you hit a wrong note, and you go [in amazement, delight] ‘Ooohh!’ And you write a whole song on that chord. The excitement of getting the mandolin, finding new chords – that’s really lifted me, that has. That’s the opening track to my new album.”

Great. Can you tell me the title?

“I don’t think so, actually,” he hesitates. “I’m never sure with that… I want to tell you the title, definitely, but…”