“How does it feel to be pathologised?”: “The Dylanologists” reviewed

How does it feel, to be pathologised? A few of you might wonder as much, picking up with some trepidation David Kinney’s “The Dylanologists: Adventures In The Land Of Bob”. For here is a book that purports to expose the eccentricities of Bob Dylan’s most obsessive fans, who – imagine! - spend all their money on bootlegs, rarities and ephemera, follow the Neverending Tour around the world, crowd the front rows of his gigs, meticulously work through his lyrics for meaning and echo. Not to be paranoid here, but is Kinney talking about us? 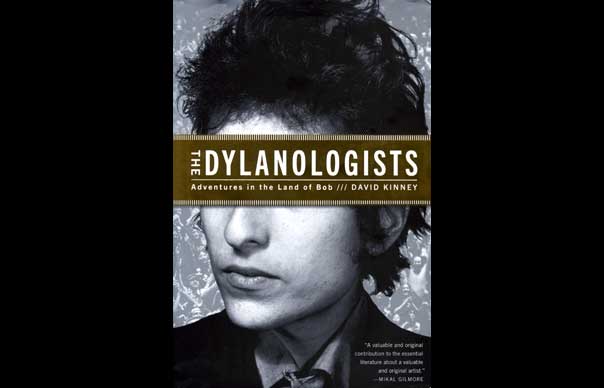 How does it feel, to be pathologised? A few of you might wonder as much, picking up with some trepidation David Kinney’s “The Dylanologists: Adventures In The Land Of Bob”. For here is a book that purports to expose the eccentricities of Bob Dylan’s most obsessive fans, who – imagine! – spend all their money on bootlegs, rarities and ephemera, follow the Neverending Tour around the world, crowd the front rows of his gigs, meticulously work through his lyrics for meaning and echo. Not to be paranoid here, but is Kinney talking about us?

He is, of course, or about some of us. “The Dylanologists”, though, is an open-hearted attempt to understand the nature of fandom, and the nature of Dylan himself, rather than a work of ridicule or hack-psychoanalysis. Indeed, there’s a good argument to be made for Dylan himself emerging as one of the book’s strangest characters, as he forlornly does doughnuts on his motorbike in an empty parking lot. Throughout, he is captured finessing his enigma with a zeal that even his most dedicated followers would struggle to match.

“No other performer fucks with his fans like Bob Dylan,” argues one fan, Peter Stone Brown (brother of the “Blood On The Tracks”-era bassist, Tony Brown). One suspects that a few Neil Young loyalists might have a different opinion, but perhaps that’s a clue to true obsession: not only is the object of your affection the most talented artist extant, they also must at least appear to be the most difficult and contrary.

Kinney is particularly good at detailing the research of Dylanologists like Scott Warmuth (www.swarmuth.blogspot.co.uk), who see their subject as a fairground illusionist, a fiendish riddle-setter. Unlike some, Warmuth isn’t interested in looking for what Kinney calls “an answer key or a master code”. A complete and transparent understanding of Dylan is not his goal. Instead, “He was having the time of his life working out an elaborately-constructed puzzle linking his twin loves, music and books.”

Warmuth, a DJ in Albuquerque, fossicks through Google, chasing down lines and phrases in Dylan’s writing. He finds allusions to Virgil, and to New Orleans travel guides, to arcane carny slang and 1961 editions of Time magazine. Most amusingly, he divines evidence in “Chronicles” of a self-help book called “The 48 Laws Of Power”, specifically the section titled “The Science Of Charlatanism, Or How To Create A Cult In Five Easy Steps”.

As he lays merry waste to “Love And Theft” and subsequent Dylan records, Warmuth starts off endless fights within the Dylanverse, as some become charmed by the man’s sleight-of-hand appropriations while others, disillusioned, believe he has become nothing more than a plagiarist.

Dylan fans, in one of the book’s least surprising revelations, are a volatile and argumentative bunch, and combat – over a space in the front row, say – is a recurrent theme in “The Dylanologists”. Kinney is consistently good, though, at humanising his subjects, providing engaging backstories that add context to what can seem, in isolation, somewhat bizarre behaviour: the forensic preparations of bootleggers; the expensive purchase of Dylan’s high chair; the fanzine with a fixed circulation of 12 copies. The editor of the last, John Stokes, writes a 23-part series, totalling 65,000 words, focused entirely on “Visions Of Johanna”. “In part 22,” notes Kinney, “he confessed to having second thoughts about his conclusions.”

There are, necessarily, more extreme stories in “Dylanologists”, and the trash-digging AJ Weberman hovers uncomfortably around the action, the paranoid extremist against whom Dylan fans must always measure their behaviour. Kinney is a friend and fellow traveller, though, fastidious in avoiding freakshow exposés, and his book never becomes a kind of rhinestone-and-buckskin sequel to Fred And Judy Vermorel’s “Starlust”. If there’s a recent parallel, it’s John Jeremiah Sullivan’s brilliant detective piece in the New York Times, “The Ballad Of Geeshie And Elvie”, with its description of the world of neurotic blues scholars. “Nostalgia,” says Mitch Blank, one of Kinney’s most engaging subjects, “is a mild form of depression.”

“The Dylanologists” is by no means a perfect book. Even the singer’s more dilettante-ish fans may find themselves frustrated by Kinney retelling great chunks of the Dylan story as a means of structuring his narrative, useful though it is to be reminded that Dylan himself has behaved like a stalkerish fan (towards Woody Guthrie, in particular). But along the way, there are vignettes and observations that make him seem closer than usual to human, even fallible: what kind of recluse leaves a ticket at every show for a woman calling herself Sara Dylan, who once scammed 18 rooms on a record company account?

“People want to know where I’m at, because they don’t know where they’re at,” Kinney reports Dylan telling one interviewer. “The Dylanologists” approaches the problem from a crafty new angle, and makes a little more headway than usual. It is, again, Scott Warmuth who points the way to a potentially more useful, less emotive understanding of his prey – as a brilliant and slippery literary trickster, collagist and master of subterfuge, for whom the games might just conceivably be more significant than the solutions.

Before I go, I should explain my presence here. As of this week, Allan Jones has become Uncut’s Editor-At-Large, and I’m honoured and more than a little daunted to step into his old role as the mag’s Editor. I’ll try and continue to blog regularly – I also post playlists of everything we’ve listened to here in the office once a week – but in the meantime you can follow me on Twitter @JohnRMulvey . Also, please send in your letters for potential publication to our new email address – uncut_feedback@ipcmedia.com. Your memories and tributes to Allan will, of course, be especially welcome. Thanks…