Hot Chip, “In Our Heads”

Things may be different now but, when I was an NME staffer in the 1990s, we were forever being accused of building bands up, only to take delight in knocking them down soon after. 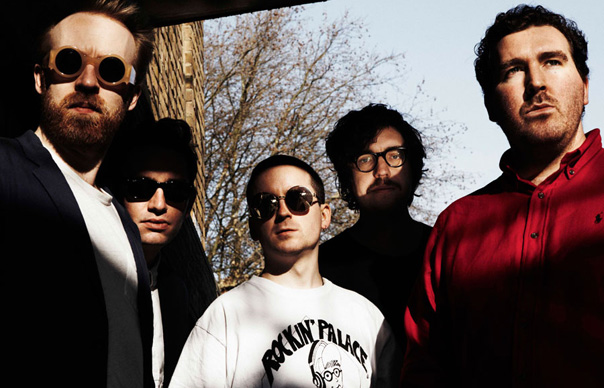 Things may be different now but, when I was an NME staffer in the 1990s, we were forever being accused of building bands up, only to take delight in knocking them down soon after.

With hindsight, we probably should have been flattered to be credited with such Machiavellian scheming and clarity of purpose. The truth, more often than not, was a lot more prosaic: the fans of the band at the paper had simply been exhausted, or had run out of things to say. Backlashes were nothing of the sort – it was just a detractor’s turn to voice their opinion.

Reading Twitter and the like over the past few days, it seems as if it might be the detractors’ turn to write about Hot Chip this time. If the band have received a critical free pass for much of the past eight years, the loudest opinions around “In Our Heads” look as if they might be negative, from the writers uncharmed by Hot Chip’s unsteady fusion of club music, English pop and a somewhat winsome brand of indie. Their greatest crime, one deduces, is to allow Alexis Taylor near a microphone, possessing as he does a voice of notable frailness and vulnerability: “wimpy indie wank” might well have been the verdict of at least one of my old NME colleagues.

It would be disingenuous of me to pretend that Taylor’s voice on “In Our Heads” is entirely to my taste. As alluded to in this blog about “One Night Stand”, it can be cloying, especially on some of Hot Chip’s slow jams.

Nevertheless, “In Our Heads” feels like the work of a band who are maturing in a mostly elegant, occasionally daft, highly satisfying fashion. The daftness you’ve possibly detected on the camp Euro-electro flashback of “Night And Day”, a song that unexpectedly sounds ripe for a Ya Kid K cameo. That would be preferable, perhaps, to Taylor’s own self-deprecating rap, which betrays a similar sense of humour – not really mine – that came to the fore on Joe Goddard’s otherwise lovely Two Bears album, and which I could possibly describe as Bestivallish.

As ever, though, Taylor’s vocal melodies are terrific: rich, addictive, possessing a certain melancholic bent even when they’re superficially euphoric. They work best here when the music is at its most subtle, supple and repetitive – when the rest of Hot Chip lock into a sort of gently pounding techno.

You can hear it in the opening track, “Motion Sickness”, and the way Hot Chip calmly layer some pretty tacky sounds – those horn stabs! – into such a sophisticated whole. In common with many of Hot Chip’s best songs – “Boy From School”, “Don’t Dance”, “One Life Stand” – there’s something intangibly emotional about it all, even before Taylor arrives with a killer, weirdly elegaic first line, “Remember when the people thought the world was round…”

If there’s an obvious parallel to be drawn, the New Order of “Technique” seems apposite, albeit filtered through another 20+ years of house and techno scholarship. “Let Me Be Him” is an even softer take on the formula, with rare prominence initially given to Goddard’s lulling voice.

Best of all, there’s “Flutes”: mantric, intense in a covert way and, though this may be the product of the video, impressively disorienting. At times, during the seven minutes of “Flutes”, it feels as if Hot Chip are at their best when they stray closest to dance music. But of course their strength – or, to some, their weakness – is that they are never quite so straightforward. For dance fans, one suspects Hot Chip will never be enough of a dance band, just as indie fans and pop fans will continue to be irritated by their reluctance to be an uncomplicated indie band or pop group.

For some of us, though, their vagaries are crystallising into something quite precious: a fine and eccentric English musical phenomenon. Here’s “Flutes”…