“Together, more or less in line…” A marathon new doc makes sense of The Grateful Dead. 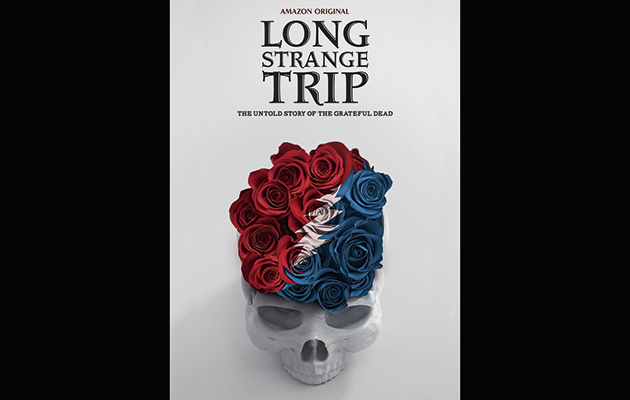 The definitive is not a concept which sits easily with the Grateful Dead. How do you tell the all-encompassing story of a band who embraced chaos as a guiding principle; whose legacy rests in myriad bootlegs rather than canonical albums; whose songs reinvented themselves, every night, for 30 years? “I don’t see the sense in doing the same thing over and over again,” Jerry Garcia tells an interviewer at some point deep into the new Amazon Prime series, Long Strange Trip. “For me, being alive means always changing.” It’s a heroic stance, but also an exasperating one, as articulated by Sam Cutler, a cosmic English geezer who tour-managed the band between 1970 and 1974. “It took me 18 months,” he says, “to get the Dead to agree to do a photograph.”

There are, then, some pretty obvious challenges facing any director who attempts to organise the band’s tangled history: like a peak live version of “Dark Star”, the path through is never obvious, and it’s hard to remember where you’ve been when it finally ends. Long Strange Trip, though, does an implausibly good job of making sense of this most elusive of great bands, while at the same time staying faithful to their caprices, their fundamental love of digression. As the title suggests, it’s usefully long, running to four hours in the version that has circulated round film festivals these past few months, or six chunky episodes in the cut coming to Amazon Prime. Even then, Amir Bar-Lev’s epic is far from comprehensive: two keyboardists – Tom Constanten and Vince Welnick – don’t even get a mention. Garcia’s personal life and substance issues, meanwhile, are mostly observed from the perspective of Barbara Meier, his girlfriend at the beginning and end of his adult life. The woman who was by his side for most of the years in between, Mountain Girl, is conspicuous by her absence.

Garcia’s complexities inevitably take precedence, as a charismatic bandleader who was assiduous in absolving any responsibility. He believed that a life in music should be an unpredictable adventure – artistically, spiritually and physically – and remained nobly, at times selfishly, wedded to that ideal. Cutler is not the only interviewee who remembers Garcia’s perpetual question being, “Is it going to be fun?” For himself, undoubtedly. One wonders, though, how much fun was had by the crew employed to make a film about the band’s 1970 European tour but who, after being repeatedly dosed, instead chose to film themselves going off the rails?

Long-lost footage is a critical part of Long Strange Trip, and it’s touching to watch Bob Weir seeing, for the first time, Garcia goofing into the lens at the Bickershaw festival, or sat with the band and crew having the nuances of pounds, shillings and pence explained to them by the indefatigable Cutler. Some clips will be well-known to Deadheads: the version of “Bird Song”, during which a naked man cavorts behind a blissed-out Garcia, will be traumatically familiar to anyone who’s seen the Sunshine Daydream concert movie. Others are much fresher, and weirder, and don’t always work as great advertisements for the pleasures of Nitrous Oxide.

It is the new interviews, though, and the reconvening of a sprawling and eccentric family, that provides the greatest charm and insight. The core four all conform to stereotypes: Weir interviewed in yoga pose; Phil Lesh the professorial voice of authority; Bill Kreutzmann as calm and wry as Mickey Hart is antic and wired. The supporting cast, if anything, are even better value, as Cutler – apparently living in the back of a van, and stopped by the police while the cameras are running – is juxtaposed with Joe Smith, a dapper music biz grandee who signed the band to Warners. “I realised I wasn’t dealing with Dean Martin anymore,” he says, masterfully playing the straight man. “The wildest act we had was Trini Lopez.”

The discomfortingly macho stage crew are represented by Steve Parish, still belligerent, and the obsessive Deadheads by two erudite non-music writers, Steve Silberman and Nick Paumgarten, and one US senator, Al Franken, who engages his interviewer in a protracted discussion about the best live version of “Althea” (Nassau 1980). The Dead’s two main lyricists make characterfully odd cameos. John Perry Barlow goes on a pilgrimage to the grave of the first of the gang to die, Pigpen, and grouches, “Why the hell would people put guitar picks down on the grave of a piano player?” The “notoriously reclusive” and obtuse Robert Hunter is tracked down with the aid of Weir, and is found reciting the lyrics of “Dark Star” before asking, pointedly, “What is unclear about that? It says what it means!”

Bar-Lev smartly avoids psychedelic cliché, restricting the visual shorthand of trips to a section where Garcia describes not an acid experience, but his diabetic coma of 1986. The surviving bandmembers (along with Martin Scorsese, whose No Direction Home is a good point of comparison) may be executive producers, but there is never the feeling that content has been censored or sanitised, especially when Garcia’s decline and death is addressed, movingly, in the final episode.

It’s hard to imagine Garcia himself appreciating such a documentary, even one so loose and heartfelt. Doubtless he’d have been unnerved at being the centre of attention, would’ve disdained the idea of a permanent monument for a band who thrived on the idea of transience. But for the rest of us, fans especially but hopefully neophytes too, Long Strange Trip is like the very best Grateful Dead jams: tender, inspirational, and so much fun that it could easily have lasted twice as long.