So music at Glastonbury begins today, after Thursday's rain-soaked warm-up. Thankfully the sun is out, the mud is mostly gone, and the relieved party atmosphere is perfect for Goat at the West Holts Stage. 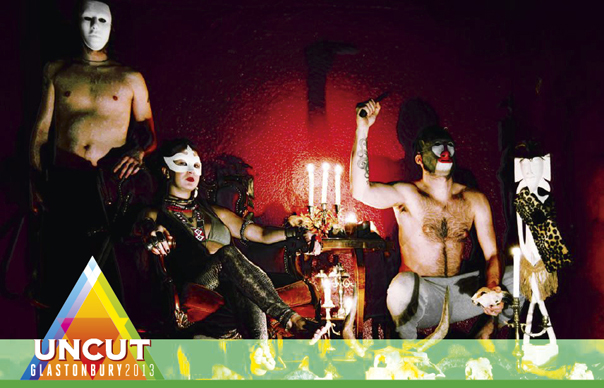 So music at Glastonbury begins today, after Thursday’s rain-soaked warm-up. Thankfully the sun is out, the mud is mostly gone, and the relieved party atmosphere is perfect for Goat at the West Holts Stage.

While most of the bands on Glastonbury 2013’s main stages are chart-friendly rock or pop, Goat are more like an echo of the festival’s feral, druggy past. The Swedes, numbering seven members, are variously cloaked in carnival masks, voodoo headdresses, threatening balaclavas and flowing white and black robes – not disimilar from some of the more decadently dressed punters floating around Glastonbury’s temporary lanes, in fact.

As on their album, World Music, Goat today specialise in longform psychedelic jams, topped with Amon Duul guitar solos, chanted vocals and jittery drumming of the kind found on Love’s Four Sail. Starting off with an extended version of their debut’s opener, “Diariabi”, the band also take in Afropop on “Let It Bleed” and swampy, heavier sounds on set-closer “The Sun The Moon”. Trippy visuals swim behind the band throughout, as their dual, masked frontwomen prowl the stage bashing tambourines and shaking maracas. The only downsides to the group’s set are the murky sound, which leaves just bass and drums audible at times, and the slightly interchangable nature of some of their grooves – 40 minutes, rather than an hour, would have been perfect.

For all that’s great about the collective’s musicianship and performance, though, the best thing about Goat at Glastonbury is that their hypnotic, ritualistic music is the perfect soundtrack to drunken dancing, a great deal of which is unsurprisingly displayed this afternoon.