As new early 70s collection is released, the pair speak about how the band formed 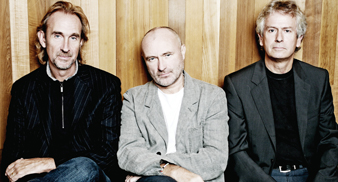 UP CLOSE AND PERSONAL: TONY BANKS AND MIKE RUTHERFORD


TONY BANKS: At the time, the idea of being in a group was pretty remote. We were from quite a strange background, and I’m not sure if we ever saw ourselves that way. We just used to like the idea of writing. That was how we got involved with Jonathan King, on the basis of him trying to sell our songs somewhere. We went to quite a restrictive school, and what our parents and our school intended for us was rather different.

MIKE RUTHERFORD: After we left school, we spent six months in a cottage in Dorking writing and rehearsing, that was when we became a band. Richard McPhail, who was our best mate, roadie, driver, cook, everything…his father had it, and wanted it lived in before he sold it. There was that lovely phrase, “Getting it together in the country”. Everyone was in the country, getting it together in a cottage. We had a chance to be completely isolated and just work on the stuff.

TB: We became more interested in longer form – allowing ourselves to go a few other places. The groups that were influencing us were groups that were doing a bit more of that kind of thing, like Procul Harum and Family, and Fairport Convention. When we were writing Trespass, In The Court Of The Crimson King came out, and that had influence on us, definitely.

MR: It was quite a formative time. Stuff like Yes and those sort of bands…they seemed more about great players. I think we were more about songs. There was no worry about whether it was going to get on the radio. It was a time to be completely free musically.

TB: “The Knife” was an important song for us to write, because quite a lot of what we’d done up to the point was quite soft and acoustic. Peter (Gabriel) wrote what you might call the best bit. We started trying all this extra stuff – not just guitar solos, but really structured instrumentals. A lot of the songs had quite simple starting points – we allowed ourselves to stretch.

MR: “Rock theatre” was a tag we ended up with. Lyrically, the things that Peter was trying to say…in those days, no-one could hear what he was saying because the PA was so bad. So he was trying to act out the songs, so people would know what they were about – and that was where the whole thing sort of started. We were painting images, moods, atmospheres…so giving it a setting seemed to work well for us. Lindisfarne didn’t need to do that.

TB: From the moment you came in, you knew it was a Genesis show, it was like nothing else, I think. People liked that a fantasy was created, and we tried to keep that fantasy element going all through the show. We’d have this curtain in front of the speakers which was transparent to sound but if you shone UV light on it, it looked like there was nothing behind us. In that era we used to start with “Watcher Of The Skies”, which had a massive Mellotron intro, and all the clichés: dry ice and UV, Pete with his mask and his make-up on….

MR: At (Record label) Charisma, we were lucky to have Tony-Stratton Smith on our side. The rest of the people there thought we were a bit of a slog. We were the slightly odd ones. In those days you had guys running labels who would stick their neck out. Strat was very important to our success: Nursery Cryme he was a bit disappointed with, and he said so, but he still believed something was going to come right.

TB: Having done “Supper’s Ready” (the 23-minute song on Foxtrot) we decided we wanted to go for a concept album, and make a double album (The Lamb Lies Down On Broadway). We agreed the concept, which Peter came up with. Then he said that he really wanted to write all the lyrics, which was difficult for us because we’d always split all the lyrics among us all.

MR: Did I understand it? Not really.

TB: About halfway through, Peter got an offer from William Friedkin to write a film script, and he said he wanted to put the whole thing on hold for a month. And we said, “we don’t want to do that, we don’t really want to wait on anybody”. The attitude of the group was that we were very much a group of equals, and we didn’t want to do something for just one person. So he left.

MR: It wasn’t an easy album to make. We then went on tour in America, playing arenas, before the album had come out, and played the entire album and nothing else. Any LP we do, you have some great live songs, and some which just aren’t live songs. Bits of that were a bit uphill.

TB: Tony Stratton-Smith persuaded Peter to finish the record, and William Friedkin said “I don’t want to be responsible for splitting the group.” So we got back together, but something had gone: because we’d all been working towards the same result for the previous five years, and now things had slightly changed.

MR: When something like that happens it sows the seed that someone isn’t as keen about it all as you are. It wasn’t the happiest album to make, which is probably why the first album with Phil (Collins) singing was so good – it was a bit of fresh air, less pressure.

TB: Eno was in the studio upstairs at Island records where we did it (The Lamb…), and he came down and put a few sounds – mainly vocal sounds – on some things, little squiggly bits you can hear in the backgrounds. The introduction has a bit of wobble on it at the beginning. At one point, he wobbled the whole thing, and Pete said “I love it: all wobble!” I said, “Look, I’ve played this music. I don’t just want to hear this wobble sound.” We had a few moments like that.

MR: A few years ago, I took my sons to the Albert Hall to see (Genesis tribute act) The Musical Box. They were doing “Selling England By The Pound”, with the set and everything. My son turned to me and said: “Dad, you guys were weird.”