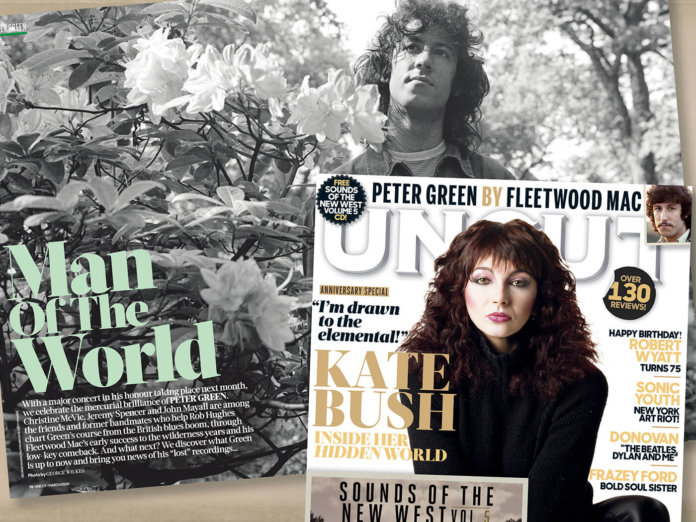 Ahead of a major tribute concert at the London Palladium, the latest issue of Uncut – in shops now or available to buy online by clicking here – celebrates the brilliance of blues-rock guitarist Peter Green. Christine McVie, Jeremy Spencer and John Mayall are among the friends and former bandmates who help Rob Hughes chart Green’s course from the British blues boom, through Fleetwood Mac’s early success to the wilderness years and his low-key comeback. Plus we discover what Green is up to now…

Every three months or so, Bernie Marsden makes a two-hour drive from his home near Oxford, heading south-west. He’ll arrive at his destination – an unremarkable house in a quiet residential street – feeling a little nervous. A short while after he rings the bell, the front door opens. “I go, ‘Hello Pete’,” says Marsden. “Or sometimes I’ll call him Pedro. Then he invites me in and makes me a cup of tea. Mentally, I still pinch myself as I walk through the door.”

As former songwriter and guitarist with UFO, Paice Ashton Lord and Whitesnake, Marsden isn’t normally given to starry-eyedness. But these visits are different. The person he comes to see is Peter Green, his idol as a young guitarist growing up in the late ’60s. The fanboy, it transpires, has never quite left him.

Before too long, Marsden and Green move to the front room with their guitars, where they are joined by Green’s neighbour, Paul. “He makes sure Peter plays every other day,” says Marsden. “I think they go fishing together, too.”

The three of them begin playing – a loose jam between friends, with no agenda. Marsden sets a tape running to record what they do: “Last time around we did ‘Whole Lotta Shakin’ Goin’ On’, Little Richard’s ‘Lucille’, ‘The Young Ones’ by The Shadows and The Beatles’ ‘Help!’ Then we’ll start rolling into ‘Oh Well’.”

“Oh Well” is the only concession made to Green’s own legacy. Originally released in 1969, it arrived at the commercial peak of early Fleetwood Mac, the band that Green founded during the British blues boom. As singer and lead guitarist, Green was a formidable figure back then – blessed with a preternatural talent that enabled him to assimilate American blues into his own distinct vision.

“All of us in the band realised that Peter was very gifted,” says Jeremy Spencer, fellow guitarist in the original Fleetwood Mac. “I learned so much from him, especially when it came to less is more.” For Christine McVie, who joined the group just as Green was departing, “Fleetwood Mac were like a bluesy Beatles. Each of them carried an amazing charisma, yet Peter stood out. You could tell that Peter had a talent way beyond most other people. He was the one who created the genius behind it all. I thought he was just unbelievable.”

Green left the band in May 1970, less than three years into Fleetwood Mac’s career. His life has taken many turns over the ensuing decades, yet his influence endures. His prowess as a live performer has recently been documented in Before The Beginning – a collection of live Fleetwood Mac recordings from 1968 and 1970 – while his debut solo album, The End Of The Game, is reissued next month. Also in February, Mick Fleetwood hosts a special celebration of Green’s music at the London Palladium on behalf of the Teenage Cancer Trust, joined by a host of famous friends and ex-bandmates – Billy Gibbons, David Gilmour, John Mayall, Christine McVie, Steven Tyler, Bill Wyman and more. “For a man who was only really performing for a total of maybe four years – and you’re talking 50 years ago now – every guitar player I talk to adores him and how he developed his magic,” says Christine McVie.

The only thing missing from the Palladium, in all likelihood, will be the master himself. On his most recent visit to Green’s place, shortly before Christmas, Bernie Marsden took with him a bootleg of Fleetwood Mac recordings, circa 1967–68. “It’s BBC sessions and two American concerts,” he says. “Really good quality. When I mentioned that one section sounded particularly good, Peter just went, ‘Bit messy!’ I imagine that’s what he was like to be in the band with at the time – really tough. But he admitted, ‘Yeah, we were a good little band.’”

You can read much more about Peter Green in the latest issue of Uncut, on sale now with Kate Bush on the cover.