“Life is good,” reflects Mick Fleetwood. We are over two hours into Fleetwood Mac’s third and final show at the O2, and it has fallen to Fleetwood to introduce his fellow bandmates on stage. 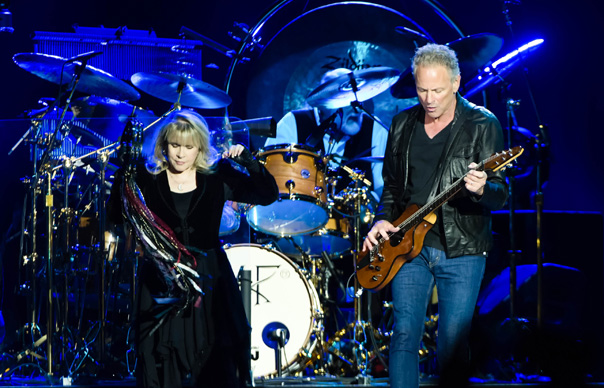 “Life is good,” reflects Mick Fleetwood. We are over two hours into Fleetwood Mac’s third and final show at the O2, and it has fallen to Fleetwood to introduce his fellow bandmates on stage.

While Fleetwood was talking for the most part about the enduring friendships that exist between the various members of Fleetwood Mac, he could just as easily be surveying the last, remarkable 12 months in the band’s career. This sprawling world tour has been a tremendous success – “We’re doing the best business we’ve done in 20 years,” Lindsey Buckingham recently told Rolling Stone. The 35th anniversary of Rumours earlier this year provided a useful reminder of the band’s most successful and notorious period, while the Extended Play EP showcased a clutch of new songs that seem redolent of the Rumours-era sound. Elsewhere, there are the broader cultural threads that have pillowed Fleetwood Mac’s 2013 – the revival of the soft rock aesthetic, and the kind of West Coast vibes evoked on Daft Punk’s Random Access Memories and Haim’s Days Are Gone.

But in many respects Fleetwood Mac are actually a more interesting proposition away from the Rumours material. The reissue a few months ago of the band’s 1969 album, Then Play On was a terrific reminder of the magical guitar interplay between Peter Green and Danny Kirwan. Indeed, while it’s nice enough to watch Christine McVie join her old band for “Don’t Stop”, it would have been more remarkable if Green had strolled on stage to play “The Green Manalishi (With The Two-Prong Crown)”. Tonight, the band’s decision to foreground songs from Tusk is sort-of brave – a great chunk of the audience seem bewildered by this – while the weird tensions between Buckingham’s songs and Nicks’ is actually quite compelling. To some extent, Buckingham and Nicks might as well be in different bands. Buckingham (who, I should point out, plays without a plectrum) seems to think he’s in some early 80s New Wave band for great chunks of the set, throwing punk rock shapes or shredding; at one point, during the extended coda for “I’m So Afraid”, he seems to think he’s in the middle of some wonderful, digressive Crazy Horse jam. His introduction to the Tusk section of the show involves a lecture in the merits of art against commerce; he clearly still has an almost neurotic attachment to that particular material, as his need to explain – or, perhaps, defend – it suggests. Later, his acoustic treatment of “Big Love” displays his extraordinary fretwork skills (incidentally, those solo albums are amazing). He and Nicks are gracious with each other – if, say, she’s singing a song, she’ll step back a little from the mic to let him play a solo – it’s slightly formal, a little awkward, you might say. Nicks, meanwhile, doesn’t entirely seem comfortable during the faster Buckingham numbers – she totters visibly during “Not That Funny”. Sounding a little like Edie Falco in The Sopranos when she speaks, and dressed as if she’s going for dinner with Big Edie and Little Edie at Grey Gardens, she seems clearly more comfortable with the soft focus Laurel Canyon Goth of “Rhiannon” and “Gypsy” than Buckingham’s angrier compositions. Her attempt to explain the provenance of the Extended Play track “Without You”, originally written by Nicks in the early Seventies, lasts longer than the song itself.

Behind them, but in their own ways no less interesting, are Mick Fleetwood and John McVie. Fleetwood himself is an engaging figure, a drumming Gandalf, surrounded by his kit, a giant Zildjian cymbal behind him, windchimes within easy reach. Fleetwood comes from a generation of idiosyncratic drummers – Ginger Baker, John Bonham, Keith Moon – and inevitably there are moments here, like “Tusk” or the mammoth solo on “World Turning”, where he gets to show us what he can do. Next to Fleetwood, on his right, stands John McVie: these days, arguably the most interesting member of Fleetwood Mac. I find McVie fascinating; in a band full of personalities, he stands out, partly because he has less of a public voice that his colleagues, but partly because he is an excellent musician whose contribution often feels critically overlooked in the Mac narrative. It would be reductive, I think, to see McVie as just the staunch backline, the anchor for Buckingham and Nicks’ very different creative impulses. Certainly, McVie’s ability to serve a song discretely and sympathetically is what is required of a skilled, high-level bass player of his standard. But in truth, McVie’s story stretches right back to the early days of John Mayall’s Bluesbreakers – he played alongside Clapton and Mick Taylor, and presumably knows where the bodies are buried. Watching him tonight, though, he is a man who appears happiest when diligently going about his business. There’s something of the Charlie Watts about John McVie in that respect – both professionals, untroubled or uninterested in the spotlight, who came from a tradition where straightforward craftsmanship is highly valued. There is one moment, though, where, quietly and seemingly unbidden, McVie goes to help his ex-wife off the stage at the end of “Don’t Stop”; it’s a gallant gesture and one that you hope says much about the kind of man McVie might be.

At two hours 40 minutes, the show could do with pruning. While giving the audience value for their money is commendable, the pool of material from which the band draw is limited – in this case, to five albums. You wonder what kind of setlist they could put together if only they’d go back further. As it is, the first hour or so – roughly up until “Landslide” – is well paced and the song choice seems thought out. It stutters then – a mighty “Gold Dust Woman” a notable exception – until “Go Your Own Way” and the first encore. The arrival of Christine McVie – Fleetwood Mac’s “Mick Taylor moment” – is understandably met with the largest cheer of the night. But as with Mick Taylor’s guest appearances with the Rolling Stones this year, her arrival reminds you of how significant her contribution was, and her departure seems cruelly premature.

As someone who is admittedly mildly indifferent to Rumours, I can’t help wondering whether Fleetwood and McVie would consider going out on a smaller scale than this, to present an alternative iteration of Fleetwood Mac, celebrating Future Games, Bare Trees and all their other great and interesting albums that have been overshadowed for too long by Rumours. It’s a nice dream, isn’t it?