Nick Ferraro started out as an Elvis tribute act around his native Philadelphia in 1986. On October 19, 2009, wearing his full Vegas Elvis costume, he went to see Bruce Springsteen at the Spectrum in Philadelphia. Spotting Ferraro in the crowd, Springsteen launched into “All Shook Up” before pulling him on stage to join in. As the song finished, Ferraro – perhaps enjoying his moment of glory a little too much – started singing “Blue Suede Shoes” before Springsteen politely took the mic off him, ushering him off stage with the legend, “Elvis has left the building.” 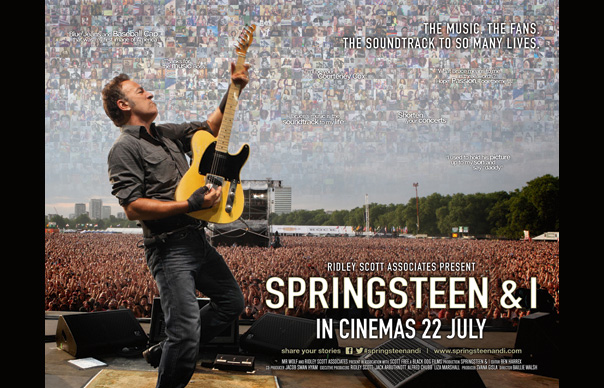 Nick Ferraro started out as an Elvis tribute act around his native Philadelphia in 1986. On October 19, 2009, wearing his full Vegas Elvis costume, he went to see Bruce Springsteen at the Spectrum in Philadelphia. Spotting Ferraro in the crowd, Springsteen launched into “All Shook Up” before pulling him on stage to join in. As the song finished, Ferraro – perhaps enjoying his moment of glory a little too much – started singing “Blue Suede Shoes” before Springsteen politely took the mic off him, ushering him off stage with the legend, “Elvis has left the building.”

Today, Ferraro – dubbed “the Philly Elvis” by Springsteen that night – recounts his impromptu performance with the Boss while sitting on a park bench, accompanied by his wife Dotty. Dressed in a grey sweatshirt, tucking into a hot dog, Ferraro is an unassuming figure – a middle aged man, although one with a unique story to tell, and among many fans who’ve supplied videos, photographs and audio recordings for this project, compiled by director Baillie Walsh into a good-natured exploration of the relationship between Springsteen and his audience.

It’s hardly a revelation, but Walsh’s film reminds us that – as with Dylan’s Bobcats and Neil Young’s Rusties – Springsteen’s fanbase is predominantly blue collar. The kitchens and living rooms we see here are from busy family homes, with photos tacked onto fridge doors, books stacked untidily on shelves and rugs protecting sofas from a multitude of spillages. Fledge, an Englishman, sitting in what looks like his shed, nurses a bottle of beer as he tells the camera how he and his wife saved up for 20 years to go on a “Bruce trip” to see Springsteen at Madison Square Garden and, thanks to a random act of philanthropy by a member of Springsteen’s entourage, found their way-back-in-the-rafters tickets upgraded to the front row. Here’s Theresa, an American housewife, who’s seen Springsteen live over 30 times since 1983, and is proud to bursting that her 10 year-old son’s favourite Bruce song is “Death To My Hometown”. Here’s Kitty, who drives a truck and likes nothing better than listening to Nebraska as she “drives through the desert”. And here’s John Magnusson, a busker, who relives for the camera the day he jammed with Springsteen on the streets of Copenhagen in 1988. “We are the people in his songs,” explains middle-aged suburban housewife Kate. These are normal people living normal lives: no Gold Circle access or VIP bar for them, and arguably no one is better qualified to explain Springsteen’s enduring appeal.

The overall effect of Walsh’s film reminds me of This American Life, the public radio show that specialises in character-driven stories and memoirs. The cast here speak frankly about what it is that Springsteen means to them – “I lost my virginity to ‘Thunder Road’,” says one, while another describes him as “a friend who taught me to be a decent person.” One man breaks down as he speaks about the “sadness and triumph” of Springsteen songs. A Danish fan still cherishes the audio tapes he made when he saw Springsteen live in Copenhagen as a child: “they represent a great day in a nine-year old boy’s life,” he smiles. Indeed, while many of the participants discuss their first exposure to Springsteen – usually on the radio, or via friends or family – the consensus here is that the connection with Springsteen live is the most important. Walsh intercuts the fan recordings with live footage reaching back to Springsteen’s earliest days as a performer. It’s interesting to be reminded, via grainy black and white, how like Dylan circa New Morning he once looked, with his half-grown beard and harmonica strapped round his neck. But its also intriguing to see how little Springsteen engages with his audience in this footage – it’s not until later that we meet a more assured and inclusive performer.

“We’re here for one reason, because you’re here,” Springsteen announces in one of the film’s up-to-date live clips, reinforcing the close bond between the artist and his audience. The crowd roar their approval. But not everyone at his shows is necessarily so enamoured with the Boss. Spare a thought for David, the long-suffering partner of a die-hard Springsteen fan. Filmed in his living room, David recounts the litany of Boss-based woes he’s endured for his wife’s devotion. “If I could say one thing to Bruce, what would it be?” he considers pragmatically. “Can you make your concerts shorter..?”

Springsteen & I will be broadcast worldwide in cinemas on July 22. More information can be found here.