Sofia Coppola always seem to have had an uneasy relationship with celebrity. 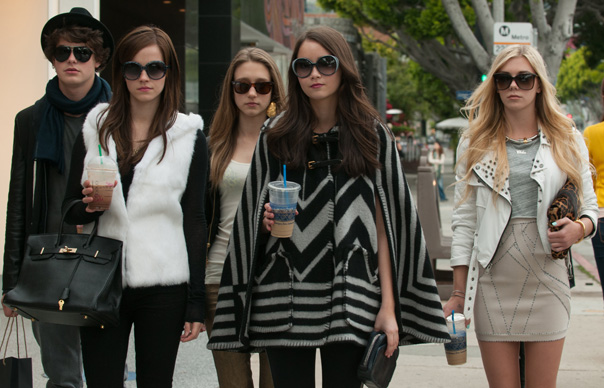 Sofia Coppola always seem to have had an uneasy relationship with celebrity.

Growing up in a storied Hollywood dynasty must have come with its own set of problems. You may remember she was on the receiving end of a critical drubbing for one of her first public outings – her performance in The Godfather Part III. Meanwhile, there’s a thread running consistently through her films about celebrity, fame, notoriety – whatever you want to call it – and how it impacts on individuals.

In Lost In Translation, it was Bob Harris, jaded and emotionally shut down by his success, struggling to connect with his family and the outside world. In Marie Antoinette, it was the queen herself – one of the most iconic figures of her time – presented as an intelligent woman adrift in the ancien regime. In what I assume to be her most personal film to date, Somewhere, it was lost and lonely actor Johnny Marco, holed up inside the Chateau Marmont.

For her latest, The Bling Ring, Coppola appears to have delivered a satirical comedy about LA celebrity. Based on a true story, it’s about a group of teenagers who burgled the homes of celebrities including Paris Hilton and Lindsay Lohan in 2008/2009. At first glance, it feels a little like a subplot in a Bret Easton Ellis novel, but perhaps in Coppola’s hands it’ll develop into something harder and more acidly funny.

Anyway, it’s one of the films due to play at the Cannes Film Festival later this month, and is due for a July release in the UK. As someone who’s pretty much enjoyed all of Coppola’s films – I might be the only person in the country to have liked Somewhere – I’m looking forward to seeing this. The trailer, certainly, looks interesting. A sequence, where the group (led by Emma Watson) appear to be in Paris Hilton’s walk-in shoe wardrobe reminds me of both the scene in American Gigolo, where Richard Gere is taking stock of his shirt collection, or indeed the numbing, pointless opulence of Versailles in Marie Antoinette.