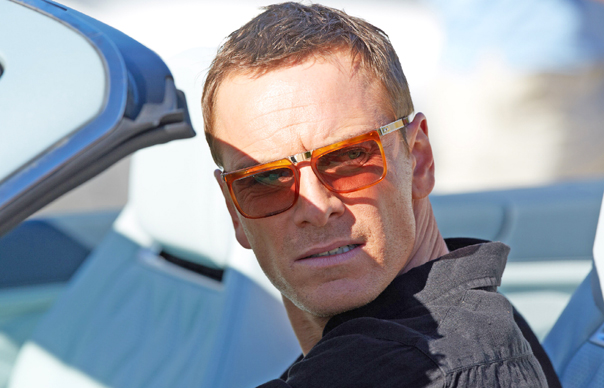 Called “Scenes Of The Crime”, the piece turned out to be excerpts from McCarthy’s script for The Counsellor – at 79, his first original screenplay. The scenes, written in McCarthy’s stark, lyrical prose, detail some typically unpleasant goings-on along the US-Mexico border, the location for many of McCarthy’s most well-known novels, from Blood Meridian through the Border Trilogy and No Country For Old Men.

Now the first trailer for The Counsellor has been released – it’s due in UK cinemas in November – and it’s interesting to see how some of the scenes that appeared in The New Yorker piece have translated onto the screen. The New Yorker piece (you can read it here, incidentally) is itself pretty detailed. This, for instance, accounts for the opening two seconds of the teaser trailer:

“Desert. The sun has just set. Bare purple mountains are dark against a darkening sky streaked with deep red. There is the high, thin scream of a motorcycle in the far distance, very slowly becoming louder. Then it streaks across the middle distance in a small part of a second, really just a blink of lights, and whines away.”

Interestingly, Amazon are currently listing a publication date of October 8 for the screenplay. The blurb (presumably written by the publishers, Vintage) gives away a little bit of detail about the film’s plot.

“It is the story of a lawyer, the Counselor, a man who is so seduced by the desire to get rich, to impress his fiancee Laura, that he becomes involved in a drug-smuggling venture that quickly takes him way out of his depth. His contacts in this are the mysterious and probably corrupt Reiner and the seductive Malkina, so exotic her pets of choice are two cheetahs. As the action crosses the Mexican border, things become darker, more violent and more sexually disturbing than the Counselor has ever imagined.”

Anyway, my thoughts on The Counsellor so far are broadly pretty positive. It’s hard to find fault with a cast headed up by Michael Fassbender, Javier Bardem, Brad Pitt, Penelope Cruz and Cameron Diaz, and I still think that on a good day Ridley Scott is a great filmmaker. For several years Scott had an option to film McCarthy’s Blood Meridian, which at least suggests he’s familiar with the author’s sensibilities. I’ve occasionally wondered what Scott would have made of Blood Meridian – a vision of the Old West full of Gothic violence, including a tree hung with the bodies of dead children, and not the stuff mainstream cinema audiences would comfortably stomach. I found some quotes from Scott, from a 2008 interview in Empire, where he admits the difficulty in faithfully adapting the book: “I think it’s a really tricky one, and maybe it’s something that should be left as a novel. If you’re going to do Blood Meridian you’ve got to go the whole nine yards into the blood bath, and there’s no answer to the blood bath, that’s part of the story, just the way it is and the way it was. When you start to scalp Mexican wedding parties that’ll draw the line.”

At any rate, the movies came late to Cormac McCarthy: as Scott appears to have found with Blood Meridian, it’s hard to figure a way round the violence of the early novels. The first film of one of his books – All The Pretty Horses – came in 1996, thirty years on from the publication of his debut, The Orchard Keeper. It was less successful than later adaptations of his novels. Later, I remember reading No Country For Old Men and thinking it felt more like a screenplay than a novel. Of course, the Coen Brothers film won four Academy Awards, including Best Picture and Best Director, and – amazingly – John Hillcoat made a pretty successful take on The Road, a book so relentlessly dark and so relentlessly nasty it was almost parody.

Quite how “things become darker, more violent and more sexually disturbing” in The Counsellor we’ll have to see.