First Look – Olivier Assayas’ Something In The Air

At the end of last week, I watched the new film by Olivier Assayas, which has been called Something In The Air in England, though its original French title – Après Mai – arguably feels a little more evocative. 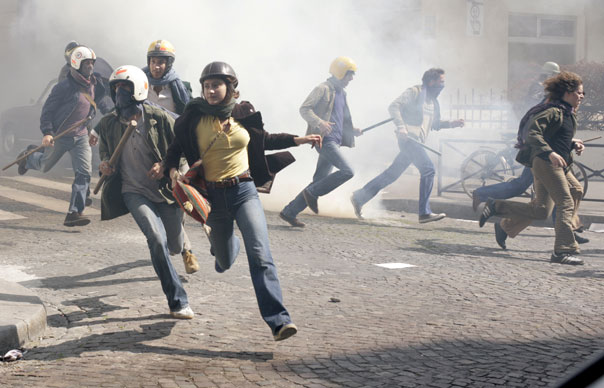 At the end of last week, I watched the new film by Olivier Assayas, which has been called Something In The Air in England, though its original French title – Après Mai – arguably feels a little more evocative.

The film is set in 1971, and Assayas is interested in how a generation of politicized students defined themselves in the wake of the May, 1968 demonstrations in Paris. Essentially, it’s a rites-of-passage piece, pivoting on high school student Gilles (Clement Metayer), who is torn between the heavy demands of his fellow students activists and pursuing his own less militant interests in film making and painting.

Assayas was 16 in 1971, and this is clearly autobiographical stuff. I think one of the film’s strengths is its terrific attention to detail – particularly apparent on the soundtrack. I’m reminded a little of Bertolucci’s The Dreamers, which was set during the ’68 protests and featured such predictable cultural signifiers on the soundtrack as Hendrix, Dylan, Janis Joplin, the Grateful Dead and The Doors. On the other hand, the soundtrack for Something In The Air appears to be a very personal choice, clustered around the progressive psych-rock/psych-folk of Syd Barrett, Kevin Ayers, Nick Drake, Dr Strangely Strange, the Incredible String Band and the Amazing Blondel.

Ayers – solo and with Soft Machine – features quite high up Assayas’ list of personal faves. Gilles is dumped early on by one girlfriend, who tells him she is leaving Paris for London, where her step-father is “doing the lights for Soft Machine”. A wonderfully woozy party sequence, set in a huge country house, is soundtracked by the Soft Machine’s “Why Are We Sleeping” and there’s a tremendous use of Ayers’ “Decadence” at the film’s close.

Anyway, I’ll be writing in more detail about the film itself in a future issue of Uncut. The soundtrack is available from iTunes, incidentally.