Four years on from the death of his creator Chris Sievey, Frank Sidebottom has finally found the international platform that eluded him during Sievey's lifetime. 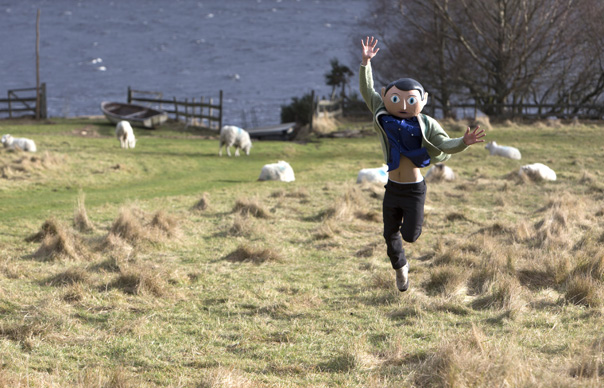 Four years on from the death of his creator Chris Sievey, Frank Sidebottom has finally found the international platform that eluded him during Sievey’s lifetime.

But although Frank is a film about an eccentric musician who wears an outsized papier mâché head, there the connection to Sievey and his character ends. Lenny Abrahamson’s film involves a Viking burial, sex in a jacuzzi and a gig at South By South West, while Frank himself, “on the way out there in the furthest corners”, is played by a Hollywood A-lister, Michael Fassbender.

So what are we to make of Frank? Is this a film that simply takes unforgivable liberties with a man’s life and career? Or, on the other hand, does Abrahamson take the bare bones of a fictional character with only limited reach and repurpose them in a way that will appeal to an international audience? Alternatively, you might conclude that Abrahamson’s film addresses notions about the cult of personality in the same wayward spirit as Sievey himself.


Abrahamson’s film is loosely based on the experiences of the broadcaster Jon Ronson, who as a student during the 1980s played keyboards in Sidebottom’s band. Ronson co-wrote the screenplay, and appears here analogously as Jon Burroughs (Domhnall Gleeson), while the story is now set in the present day. As with Ronson, Jon Burroughs is invited to play keyboards in Frank’s band; but the story heads off in a different direction afterwards. Rather than being from Timperely, Abrahamson’s Frank is a Yank, from Bluff, Kansas and has spent time in institutions: the head is less a comedic affectation and instead a device for distancing himself from the real world. This Frank is a mentally troubled individual mistaken by his peers for a visionary.

With Burroughs on board, the band (surly, black-clad, Jamie Hince types) decamp to a remote lodge in Ireland where Frank sets about recording an album. This chunk (the best part of the film, incidentally) depicts Frank as a kind of benign Captain Beefheart, encouraging his band to design their instruments, record the sound of water, and so on. Amusingly, we discover that Frank keeps his head on while in the shower. We also discover there is some friction between Burroughs and Clara (Maggie Gyllenhaal), the band’s icy theramin player and Frank’s closest lieutenant.

With a star as big as Fassbender in the title role, you know the head is coming off at some point (this being Fassbender, you could be forgiven for wondering what else might come off, too). When Fassbender is unmasked he does plenty of staring awkwardly at the floor, Very Troubled. In a way, it’s rather sad to find mental illness used to explain, rather glibly, the reasons why a man would wear a mask for much of his professional career.

Ronson, at least, is commendably honest with his own alter ego. As the film progresses, Burroughs’ desire to shift Frank’s music towards the mainstream significantly misjudges the man and his art. It’s a criticism I suspect Sidebottom’s fans would similarly lay at the doors of Abrahamson and Ronson.

Frank is released in the UK on May 9