The bulk of the action takes place in retrospect, prominently soundtracked by music from that era. There’s a knowing narration from a central character who is attracted to an exhilarating lifestyle fuelled by crime, money and drugs. There is a terrible fall, and a redemption of sorts. 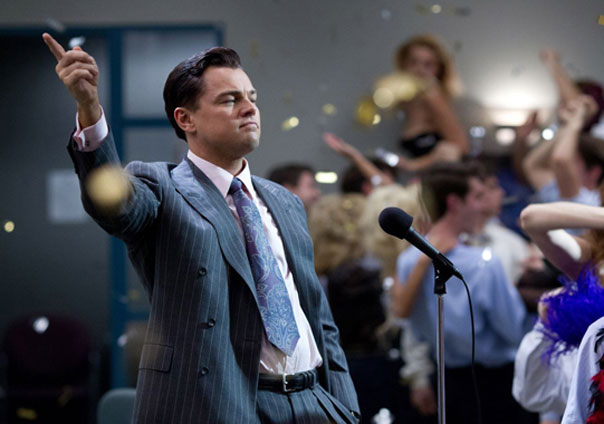 The bulk of the action takes place in retrospect, prominently soundtracked by music from that era. There’s a knowing narration from a central character who is attracted to an exhilarating lifestyle fuelled by crime, money and drugs. There is a terrible fall, and a redemption of sorts.

Which Martin Scorsese film are we talking about here? Mean Streets, GoodFellas, Casino, The Departed? These are some of Scorsese’s very best films – the first two, at least, among the most influential and imitated movies in modern cinema. With his latest film, The Wolf Of Wall Street, Scorsese seems to be deliberately playing fast and loose with his own enviable back catalogue. Let’s call it CashFellas, OK? The director’s 23rd film is a white collar crime caper presented as a screwball comedy, delivered at the kind of breakneck pace you’d hardly expect from a man in his seventies. It is a film that features dwarf-hurling, mass orgies and Joanna Lumley as a high end money launderer. One of the films best jokes involves Leonardo DiCaprio attempting to drive a Ferrari while out of his skull of Quaaludes. It is obscene, hysterically pitched, epically debauched.

The Wolf Of Wall Street is based on a memoir by Jordan Belfort, an entrepreneur who cheated clients out of tens of millions of dollars before he was jailed for fraud and money laundering. Scorsese’s film opens in the mid-Eighties, with the young Belfort striking out on Wall Street. As his mentor, Matthew McConaughey – terrific – delivers a ten-minute tutorial on the merits of cocaine and masturbation as a key to success. After the 1987 Black Monday crash, Belfort sets up his own brokerage film, Stratton Oakmont (motto: “stability, integrity, pride”) with a few desks in a Long Island garage, and sets about selling pennystocks over the phone. Belfort’s rise is swift and spectacular, attracting the interest of the FBI. There are helicopters, yachts, Swiss bankers. At times, Belfort’s parties become a kind of X rated version of The Great Gatsby; at others, I’m reminded of high end gross-out comedies (this might have something to do with the presence of Jonah Hill in a significant role).

As Belfort, DiCaprio is impressive. With his slicked back dark hair and his sharp suits, there is a touch of the 1920s gangster star to him – a Paul Muni, maybe. The lengthy motivational speeches he delivers to the staff of Stratton Oakmont remind me, to some extent, of the kind of airpunching guff Tom Cruise would spout in a movie like Jerry Maguire. Indeed, there’s a nagging suspicion is that Scorsese isn’t just directing his satire at the loathsome, hubristic extravagance of the 80s Wall Street culture but also an entire raft of movies from the same era that shared similar, over-reaching agendas.

Through all this, Scorsese’s camera jumps, swoops, spins and cavorts with the same nervous energy as Belfort and his cronies on a cocaine bender. It’s relentless and exhausting, but the narrative line for Terence Winter’s script is clean – if a little obvious. Greed is not good. Scorsese’s decision to riff on his own greatest hits is reinforced in lines like “I’ve always wanted to be rich,” which echo Henry Hill’s claim at the start of GoodFellas: “As far back as I can remember, I always wanted to be a gangster.” Cristin Milioti, who plays Belfort’s first wife Denise, has Lorraine Bracco hair. Jonah Hill, as Belfort’s best friend and chief conspirator Donny Azoff, is like a cuddlier Joe Pesci. The TV ads for Stratton Oakmont recall commercials for Morrie’s wig shop in GoodFellas. In one respect, though, it critically lacks a Jimmy Conway, a corrupting figure of absolute evil. In the end, it seems as if Belfort is capable of doing all that himself.