It seems as if a month doesn’t go by without the release of a new Ben Wheatley film. I'm exaggerating, of course, but Wheatley is certainly becoming one of Britain’s most prolific film makers, with four full-length features since 2009 – as well as two series of Johnny Vegas’ sitcom, Ideal – under his belt. 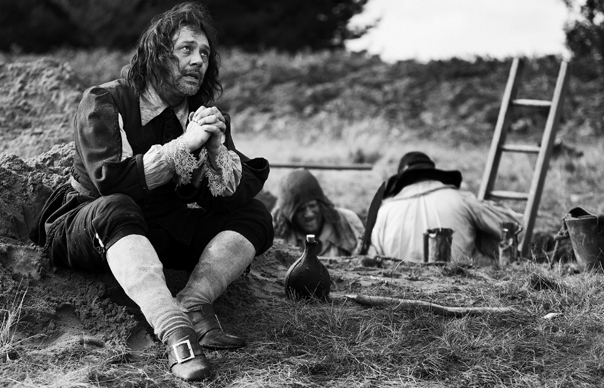 It seems as if a month doesn’t go by without the release of a new Ben Wheatley film. I’m exaggerating, of course, but Wheatley is certainly becoming one of Britain’s most prolific film makers, with four full-length features since 2009 – as well as two series of Johnny Vegas’ sitcom, Ideal – under his belt.

Wheatley’s strategy seems to be to shoot fast and cheaply using a small cast. His debut, Down Terrace, was filmed in eight days on location in a house belonging to one of the cast, who included professional actors Wheatley had befriended while working on Armando Iannucci’s Time Trumpet and first-time actors. It’s a tactic that has self-evidently proved successful for Wheatley, and one that he repeats in his latest film, A Field In England.

The film is written by Amy Jump – Wheatley’s wife, who also co-wrote her husband’s last film, the excellent black comedy, Sightseers. The cast totals five, and Wheatley shot in black and white on location over 12 days in – as the title suggests – a field in England. The biggest name on the marquee is Reece Shearsmith from The League Of Gentlemen, who plays one of three deserters from the English Civil War caught in a scheme by an alchemist, O’Neill, involving treasure of some description buried somewhere in the field.

The film is basically a psychedelic historical drama, interpolating elements of folk horror and shot with an attention to landscape and natural lighting that, on occasion, recalls Terrance Malick. But under Wheatley’s gaze, even a pastoral idyll like his field at first appears to be contains cruel and unusual dangers. The score – a mix of discordant electronica, traditional 17th century songs and eerie acoustic plucking – does much to enhance the film’s more hallucinatory passages.

Interestingly, A Field In England is also getting a pretty heavy duty release, which illustrates Wheatley’s growing stature as a film maker. It’s due to be the first film in the UK to be released simultaneously in cinemas, on DVD, on freeview TV and on VoD. If you think that’s a little too jazzy, then you might like to know that Sightseers is screening at the Pencil Museum in Keswick on August 3, as part of a Forestry Commission season called Picnic Cinema which shows films in unusual locations – Coppola’s Dracula Lowther Castle, Cumbria, Apocalypse Now in Gisburn Forest, Clitheroe, that kind of thing. There’s more information here.

Anyway, here’s the first trailer of A Field In England: “Open up and let the Devil in,” as the man says. I’ll be reviewing it in the next issue on Uncut, out in July. Incidentally, July is shaping up to be a pretty strong month for films – there’s also Sofia Coppola’s Bling Ring, Noah Baumbach’s Frances Ha, The World’s End from the Shaun Of The Dead team and, hopefully, Springsteen & I.