For Steve Coogan, Alan Partridge’s big screen debut represents a pivotal moment in the actor’s relationship with his most famous creation. 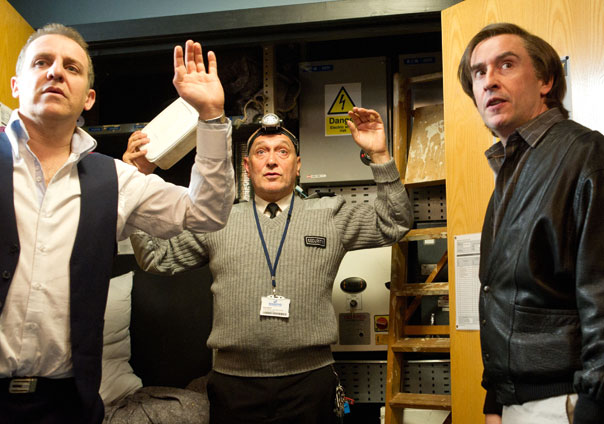 For Steve Coogan, Alan Partridge’s big screen debut represents a pivotal moment in the actor’s relationship with his most famous creation.

You sense that Coogan has been trying to escape Alan’s gravitational pull for some years now, and not always successfully. From the range of characters he presented in Coogan’s Run – his first attempt to extend his repertoire after the success of Knowing Me, Knowing You – the most memorable was regional salesman Gareth Cheeseman (best line: “A wank, I think”), essentially a Partridge clone.

Tony Ferrino, The Parole Office and Dr Terrible’s House Of Horror were all equally unsuccessful attempts to move Coogan’s career out of Norwich’s finest Travelodges. Critically, they just weren’t funny. It was only really when he worked with Michael Winterbottom for the first time, in 24 Hour Party People, that Coogan found a way to move forward – his other collaborations with the director on A Cock And Bull Story and The Trip numbering among his career highs.

But as the box office failure of yet another non-Partridge project (this year’s enjoyable Paul Raymond biopic The Look Of Love, also for Winterbottom) proved, audiences find it difficult to separate Coogan from Alan. So is Alan Partridge: Alpha Papa a testimony to Alan timelessness, or an admission that Coogan will never manage to shake off the character?

In many respects, Alan Partridge: Alpha Papa feels very much like a straight continuation of the TV series. Alan is unchanged by the upgrade to the big screen: as ever, what drives the film are his grotesque and clumsy attempts to further his career. Where perhaps the film doesn’t quite work is moving Alan into what you might loosely term a “real world” situation. For the most part, Alan Partridge: Alpha Papa takes place in the offices of North Norfolk Digital, where Alan currently broadcasts his Mid-Morning Matters show. As Alan’s co-creator Armando Iannucci explained to me recently, “The key to Alan is keeping his attitude and his world small, even though we’re on a big screen.”

As the film opens, we find Alan moithering over predictable concerns – “Which is the worst monger?” he asks listeners. “Fish, iron, rumour or war?” But North Norfolk Digital has been taken over, its core brand values reimagined; it has been renamed Shape and given a particularly meaningless new tag-line: “The way you want it to be”. This leads to presenter Pat Farrell, who’s been sacked in the takeover, laying armed siege to the station’s offices, holding a group of hostages to randsom. Alan, inexplicably, finds himself liaising between the police and Pat. (For the record, Alan’s favourite siege is the Iranian embassy). What follows is mostly very funny, in particular the jaw-dropping awfulness of Alan’s attempts to use his role as hostage negotiator to his own ends. Fans of the show will be pleased to see the return of Alan’s long-suffering assistant Lynne as well as Geordie Michael and rival DJ Dave Clifton.

I remember, ahead of the release of In The Loop, discussing with Armando Iannucci the problems a showrunner might encounter attempting to transform a successful TV sitcom into a full length feature film. We both had grim memories of films like Holiday On The Buses and Are You Being Served?, which relocated the action from their natural setting to – traditionally – a poorly constructed holiday resort in Spain, where many misunderstandings regarding language, diet and sex would inevitably follow. For the record, it’s worth pointing out that Iannucci and the rest of the Alan Partridge: Alpha Papa writers know their geographical limits. Thus it is, that the furthest Alan travels during the course of this film is the pier at Cromer.