Eric Idle: “Monty Python came from the same generation as The Beatles and The Stones…”

We interviewed Eric Idle about the recent Monty Python's Total Rubbish: The Complete Collection for the August 2014 issue of Uncut. We only had room in the issue for a small chunk of the interview; so here it is in full... __________ Did making records allow Monty Python to express or try things out that you didn't do in your tv shows? Or was it a sensible marketing opportunity that you made the best of? 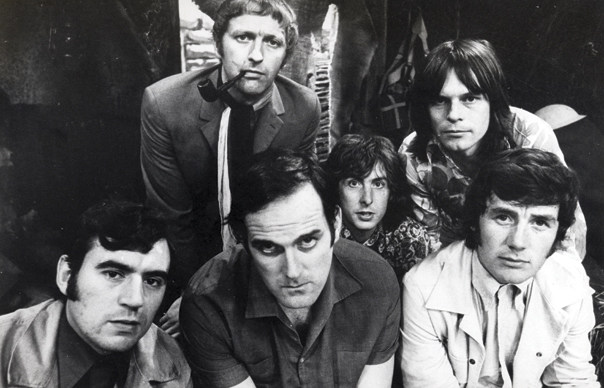 We interviewed Eric Idle about the recent Monty Python’s Total Rubbish: The Complete Collection for the August 2014 issue of Uncut. We only had room in the issue for a small chunk of the interview; so here it is in full…

Did making records allow Monty Python to express or try things out that you didn’t do in your tv shows? Or was it a sensible marketing opportunity that you made the best of?
No we always used songs in our shows. Often absurd moments like The Archaeologists breaking into song, or Telephone operators singing for no good reason, often more particularly satirical like Bing Tiddle Tiddle Bong, still a superb nailing of Eurovision. Then of course there is the lovely moment when Michael’s bad barber reveals he never really wanted to cut hair, he always wanted to be…. a lumberjack! And suddenly we’re off into the world of bad Canadian musicals. This unexpected change of pace and media is classic Python. I personally was writing and performing silly songs at Cambridge (inspired by Bill Oddie) and in Do Not Adjust Your Set.

Your work often satirised the medium it was presented in. An album title like Contractual Obligation, say, implies a similar criticism of the processes of the record business. Did you have a rough ride on the business side? Or did you draw inspiration from others who did?
We found out we “owed” Clive Davis and Arista an album. Python never took very kindly to being told what they must do. So we threw a lot more songs in as an ironic gesture. This led to our best-selling album Monty Python Sings which I put together. You can listen to a funny song many more times than a sketch. Python always examines, draws attention to or mocks the medium in which it is working, whether it be TV, movies (Camelot! It’s only a model) books or musicals (Spamalot). In this sense it is post-modern.

Python is sometimes called the “Beatles of comedy”. That being the case, which of your albums is your Sgt Pepper? Or were you more of a singles band?
Metaphors are only useful if they throw light on what they are comparing. We come from the same generation as The Beatles and The Stones and The Who, the great generation that were born at the tail end of a devastating World War that touched and cost millions of lives. The UK put every last reserve of energy into that. We grew up in an austere world, a world where authority was everywhere. Our generation threw off the shackles of this and became artists and painters and musicians and writers and poets and in our case comedians. But we were the ones that stayed in school and college. Python is actually not undergraduate humour but post graduate humour.

Some of your innovations (the “three sided record” for example) seem to derive more from a recent past of psychedelic pranks than that of radio comedy or comedy records. What were your inspirations for that kind of thing?
We loved to think of ways to challenge our audience. To start a TV show with a Pirate film that goes on for ten minutes so they think they are watching the wrong channel, this was a brilliant joke on the audience. To put the second side of a record on, and then to play it again and to hear completely different material, this is classic Python playing with the audience. It came from Terry Jones who had an old 78 record which was a commentary on a horse race, and the outcome was different depending on where the needle dropped.

You were the driving force of the musical content, as far as I understand it. Was it a question of “I’ve got this song…” Or “we’ve got this bit. How about a song?”
People say this, but actually Mike and Terry wrote The Lumberjack Song and Every Sperm is Sacred and Spam three of the finest examples of Python songs. Even John wrote silly songs like Oliver Cromwell and Knights of The Round Table. So yes I get a lot of credit for this and I certainly wrote way more songs than everyone else but comedians are often musical, as musicians are often comical. The band and the comic, the classic music hall duo. We had this great singing group called The Fred Tomlinson Singers who would come in and happily climb into Welsh drag for The Money Song and record Sit On My Face for us. And The Meaning of Life is a musical with eight numbers.

I recently saw you on Billy Connolly’s death-themed show. Can you tell me a bit about what it’s been like to observe how “Always Look…” has become embraced as a classic song, not just a classic comedy song? As a writer, were you always shooting for that anyway?
Writing is an instinctive process. You don’t set out to write a classic anything. For me the interesting thing is how Bright Side has been in the top ten of funeral songs for 30 years. It is really a parody of a certain type of optimistic war song “bluebirds over the white cliffs of Dover, look for a silver lining, bright clouds are coming” type of war song which was attempting to bring optimism into the bleak world of our fathers. Python parodies this by having people actually being crucified singing a cheery uppy song about how things will be ok! I love that it has become adopted as almost an alternative anthem. As with so much of Python, who could possibly have foreseen that. I am very happy that Virgin is re-releasing this classic album of very silly songs.
INTERVIEW: JOHN ROBINSON