End Of The Road Festival – Day 2

The second day of Dorset's End Of The Road is a scorcher – not bad for the first day of autumn. Van Dyke Parks must be pleasantly surprised, if he's still around. 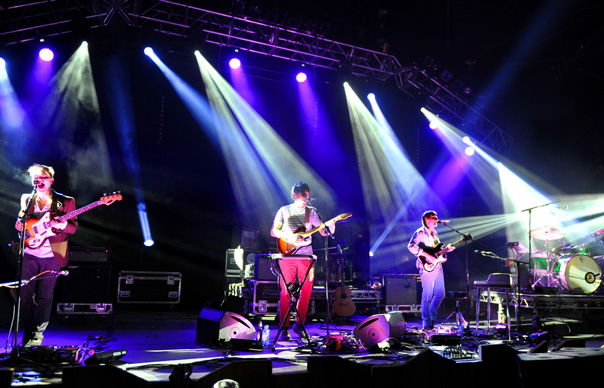 The second day of Dorset’s End Of The Road is a scorcher – not bad for the first day of autumn. Van Dyke Parks must be pleasantly surprised, if he’s still around.

Despite the dark subject matter of some of The Antlers‘ songs, their glistening, laconic music perfectly suits the afternoon sun, and hundreds of people at the main stage are lying down, sunning themselves or drifting off to the angelic sound of Peter Silberman’s voice.

Next, it’s to the Garden Stage, where Jeffrey Lewis is playing an even greater set with quite a different voice – nasal and slightly tuneless but perfect for his geeky, philosophical and supremely witty songs. Backed by his band, The Junkyard, Lewis intersperses songs with his mosquito-killing rap and a sonnet about Sonic Youth’s “Dirty Boots”.

The highlight for me is the opening song, “Krongu Green Slime”, a subtle, hilarious rant against corporatisation, using the monopolization of the primordial ooze market as a metaphor (as you can see, Lewis’ songs can’t really be explained well in text).

As Lewis finishes, we head off to the main Woods Stage, where Alabama Shakes are drawing the biggest crowd of the festival so far. People stretch out of the field and right across the path towards the food stalls. Despite their success, it seems like Brittany Howard and her band can’t quite believe it, either.

The Shakes run through a solid set, to huge applause after the majority of songs – but it sometimes seems like we’ve just stepped into a standard Alabama Shakes show, rather than something more special, and more in keeping with a festival. Professional, yes – transcendent, no.

After sampling from the aforementioned food stalls, we head to the Tipi Tent to see Robyn Hitchcock. The singer-songwriter is joined by Abigail Washburn, who played her banjo while opening the Garden Stage earlier in the day, as well as a virtuoso cellist and two backing vocalists. The set, which begins with “Sounds Great When You’re Dead” from I Often Dream Of Trains, draws heavily from Hitchcock’s limited-release album for Norway from last year, Tromso, Kaptein – “Savannah” is a sultry highlight.

Of course, there’s the usual brilliant Hitchcockian between-song weirdness – “this song is about where babies come from, but not where they go back to – unless they’re lucky” introduces “Ole Tarantula”.

It’s heartening to see the tent packed to the flaps – Hitchcock, though very much a cult artist, is proving himself to be one of our most consistent and inspired songwriters of the last 30 years.

Then to the main Woods Stage, where Grizzly Bear are closing Saturday night. The set is heavy with material from the new album, Shields, and their crowd is a lot smaller than Alabama Shakes’, but they feel more like headliners – lined up along the front of the stage like the Shakes, they put on a dynamic, enticing performance. The interplay between frontmen Ed Droste and Daniel Rossen is especially impressive – each having the skills and charisma to individually front a band.

After closing their main set with “Two Weeks” and two new tracks, the band suddenly realizes they’ve got nearly 20 minutes left of their allotted time. “Hang on, we’ve got to work out what to play,” says Droste, while the group discuss the options among themselves.

“Ok, we’re going to take a vote…” The ensuing epic, “Colorado”, is very much worth the prevarication.