The Oscar-nominated star of film sensation 'Juno' tells us about her future plans, Canada and The Moldy Peaches 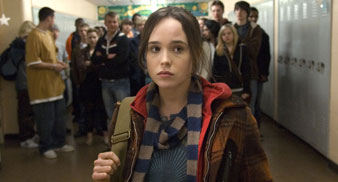 Uncut: How did you get involved with Juno?

Ellen Page: I was sent the script a couple of years ago and I fell head over heels, obsessively in love with the character. This was one of those scripts where I felt: ‘I need to play this person!’ It was just one of the best scripts I’ve ever read. I love the witty, intelligent dialogue, and I was so thrilled that a character had been written like this for a teenage girl… she’s unique, honest, sincere, but unapologetic, and unbelievably refreshing. And completely necessary for right now. I just feel so grateful that I was given the chance to play her. I don’t think we’ve ever really had a teenage female lead like Juno in a film that looks like it’s going to be seen by a lot of people. It really excites me that that girl’s out there for a lot of girls who aren’t like what the popular media portrays. That’s really exciting.

What did you like so much about the script?

One of the most exhilarating things about it is that, even though it’s a dark comedy, it’s also delicate. It would have been easy to force it and make it annoying and contrived. But luckily I was working with Jason Reitman, who I think is incredible at creating tones, and he created an excellent balance, and just guided me through it.

What attracted you to the character of Juno?

She’s extremely independent, and intelligent, and so genuine, so herself… and I love her abruptness. But she’s still very naive, especially in the relationship with the Jason Bateman character.

Do you have much in common with Juno?

I feel like whenever I play a character I have lots of things in common with them, because we’re all made of the same stuff. It’s always a really interesting experience when you enter a film to know what a character’s like on a surface level and then realise as you’re shooting how much you’re like them. It happens with every character I play.

Did you identify with Juno’s independence and refusal to conform?

I do think there’s this hypersexualised energy that happens with young girls, especially because so much is projected on you. You’re told what you’re supposed to find sexy, what to listen to, how to dress, it just goes on and on. I get pretty frustrated with how young females are commonly portrayed in popular media, but maybe with a film like Juno that will slowly start changing and people will be less narrow-minded and less judgmental. Because it is hard when you’re in junior high and you don’t dress like everyone else. Things get projected on you about lots of different things. It’s too bad that it has to be that way. It’s a drag.

I heard you introduced the director, Jason Reitman, to the music of the Moldy Peaches, which features prominently in the film. Did you have any other input – for example on the way that Juno looks?

Yes… I was very specific, I was like: “This girl’s wearing a sweater-vest!” I knew how I wanted her to look. I wanted her to wear a sweater-vest, or wear baggy pants or wear a flannel shirt and be unapologetic for it. Like: that’s okay, that doesn’t mean anything, you know what I’m saying? People get judged for the way they dress, especially in junior high or high school, and it’s, like, really childish.

Are you worried about getting sucked into that whole media circus, with the Oscar nomination and people suddenly getting interested in who you’re dating?

I think that, like a lot of people, I don’t really understand why actors are treated the way they’re treated. I just try not to take it too seriously. This is what I love to do, but I’m not going to attach my happiness to it because it’s remarkably fragile and there are a lot of other things going on in the world. And I feel like if you really want that media attention you can have it, and if you really genuinely don’t want it, it’s something that can be avoided: I think there is an element of personal choice.

Things are getting a little crazy right now and I feel it, but I think it’s about using it to your advantage, and also being able to step away from it. Clearly you need an element of that to be an actor these days, that’s just the way it is. But no, I will never submit to my privacy being completely invaded – and I think you can avoid it.

You know, I still live in Nova Scotia in a small apartment with used furniture and that’s just genuinely who I am. It’s not to make some judgment or statement against Hollywood. I keep my feet on the ground and just try to be as sincere as… you know, as honest as possible. And anyway I’m pretty boring. I mean, I’m an active person, I love camping, I love hiking, and I love to travel, and I love to read, and I play the guitar, and that’s about it. I don’t go out a lot. I’ll never receive that kind of Lindsay Lohan attention because people will be like: “Here’s Ellen Page with her tent going camping!” I don’t really think they’ll do a story about Ellen Page eating a mooseburger in Newfoundland.

What other actors do you admire?

I’m a huge Sissy Spacek fan. I love her. I like all of her work but I really love her work in the seventies – I love Badlands, and I really love Carrie. I’m also a big Kate Winslet fan, I think she’s fantastic, and I think Laura Linney’s great too, and Catherine Keener. You know, there are so many really awesome, really strong women out there, who clearly act because they love it.

You’ve done one big commercial film, X-Men: The Last Stand. How was that experience?

It was interesting, obviously, though they were shooting the film for five months and I was sitting around a lot. But it was pretty surreal to be wearing a leather suit and running through fire or dropping 70 feet into the ground, just extremely surreal.
Would you do such a commercial film again?

It’s completely situational. It depends on the film and the role. Playing Kitty Pride was awesome because I’m five foot one and I got to be a superhero and portray this young, very intelligent woman, and that’s kind of cool. So yeah, if the right thing comes up, and if doing the big movies lets you shoot the smaller ones. Kate Winslet has that figured out.

But if it were up to you you’d be more inclined to choose the indie movies?

You know, it depends on the script. Yeah, the last four or five movies I’ve shot have been relatively low-budget, but that’s just been the scripts that I responded to.

You’ve been cast in some pretty extreme roles in the last couple of years: a teenage torturer in Hard Candy, a teenage torture victim in An American Crime… is it you, or is it just the scripts?

I don’t know. I think they’re just two separate scripts that at different times I responded to. I mean, Hard Candy was one of the best scripts I ever read, and a character that I madly wanted to play. And an American Crime was a film that I thought was telling a story that really needed to be told, and it just kind of happened. I always want to challenge myself, and those roles were very challenging. But being in a film like Juno about a lighter human side of life was really good too because I’d been shooting a lot of darker, edgy material, and it felt wonderful to do a film that was honest, but had an element of lightness to it.

I heard you write your own songs. Do you have any plans to record any of them?

No, I’m not good enough.

You’ve described yourself as a feminist…

All I mean by that is that I would like women to be equal to men, so I’d probably hope that everyone’s a feminist. Women still get paid less than men, and women’s bodies are still treated like ornaments, and young girls are being hypersexualised, and it’s really unfortunate. I hope that most people would be feminists, whether male or female.

Another obvious imbalance is the lack of female film directors. Do you have any ambitions to direct?

Oh yes, I would love to direct. And I’d love to see more female directors. Actually, one of my favourite films is Ratcatcher by Lynne Ramsay, she’s incredible. To me she’s like a modern female Truffaut. I know that’s like a BIG statement to make but I just think Ratcatcher’s brilliant.