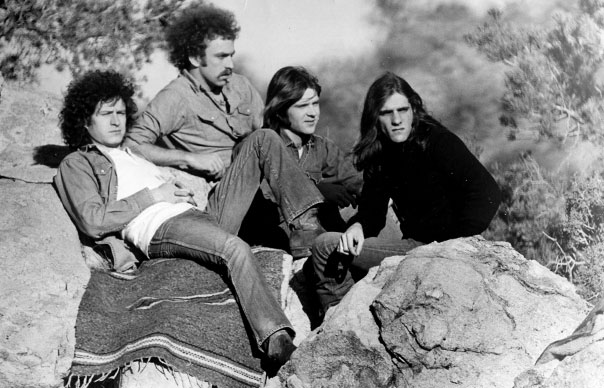 In tribute to Glenn Frey, who died on January 18, 2016, we look back on the legend of 1973’s Desperado in this archive piece from Uncut’s June 2013 issue (Take 193). Forty years on, with help from Jackson Browne and JD Souther, the band tell the story of their “fucking cowboy record” recorded in wild west London. “We’ve had the hits, now we want acceptance as serious artists…”

Some 80 years after Bob Dalton met his bloody end during a shoot-out in smalltown Kansas, a book is being passed around a $60-a-month apartment in Echo Park, the low-rent Los Angeles locale where Glenn Frey, Jackson Browne and JD Souther live, write, drink, smoke and plot their futures.

The Album Of Gunfighters by J Marvin Hunter and Hoan H Rose contains photographs and brief biographies of the outlaws, bandits and bounty hunters of the Old West. Among the usual suspects – Jesse James, Billy the Kid, John Wesley Hardin – are the Dalton Gang, a band of train robbers from the early 1890s. Rootless and reckless, the Daltons lived outside conventional rules and were rarely seen until they blew into town, grabbed the spoils and split again. To the young musicians in Echo Park, hugely ambitious yet by no means immune to romance, certain parallels start to become apparent.

“We were quite taken with the idea of being, or at least portraying, outlaws,” says Souther. “It was a serviceable metaphor for our story.”

Alongside Browne, Souther was one of two honorary Eagles who would shortly co-write “Doolin-Dalton”, the lead song on the band’s second album. Although some of the participants now express reservations about the premise – “Generally, I thought there were limitations to the metaphor of musicians as gunslingers!” Browne tells Uncut – the framing device for the songs on Desperado had personal resonance for the Eagles. Frey was from Michigan, Don Henley from Texas. Bernie Leadon hailed from Minnesota and Randy Meisner from Nebraska. Like generations of Americans before them, including the Dalton Gang, they had each headed west in search of glory.

“All of us went out west,” says Leadon. “People would go to LA and fail, and the responsible ones would move back home and start a family, while the malcontent never-say-die type personalities said, ‘No, I’m staying!’ That was our story. The idea was: ‘How are we feeling about our lives and what we’re doing, and would the people in a gang have felt the same way?’ Breaking out of societal expectations and doing something extraordinary. We were just kids, but we were looking at our lives and trying to make reasonable comment about it.”

The result was an ambitious song-cycle that sold poorly, had no hits and was slated by their label as a “fucking cowboy record”. But the LP made the Eagles more than just another country-rock band. It made them mythic.