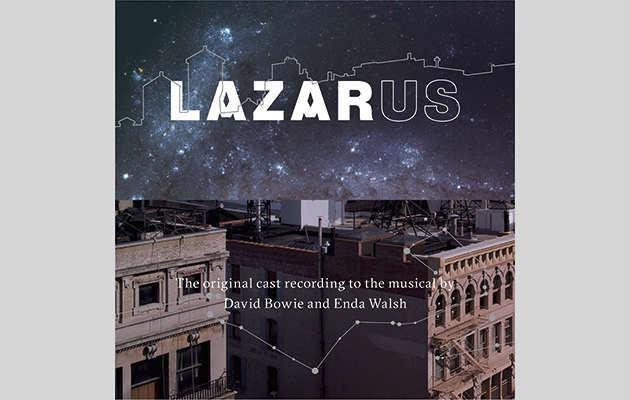 Interviewed alongside William Burroughs in 1973 for Rolling Stone, David Bowie unveiled his ambitious plans for two new projects, both musicals. One, for television, was to be based on his Ziggy Stardust album while the other was an adaptation of George Orwell’s novel, 1984. For the latter, Bowie envisioned a full-blown West End spectacular, where he would not only write the songs but also play the beleaguered protagonist, Winston Smith. Alas, Bowie would have to wait over 40 years until he finally got his wish to mount a musical. As it transpires, it was also the final work he completed before his death earlier this year: Lazarus.

Inevitably, the Lazarus cast recording comes freighted with a sense of pathos. Recording began on January 11 – the day after Bowie died – at The Magic Shop, the New York studio where he had laboured fruitfully on his last two studio albums, and then at Avatar Studios, formerly The Power Station, where, decades previously, Bowie cut Scary Monsters (And Super Creeps) and Let’s Dance. Lazarus represents an unlikely coda to Bowie’s career. Its songs – sailors fighting in the dance hall, no more free steps to heaven – are familiar. They are chosen and sequenced by Bowie himself from the full span of his catalogue, but performed by others. They are accompanied by the last three songs he ever finished: “No Plan”, “Killing A Little Time” and “When I Met You”, which also appear in Lazarus. Originating from the same sessions as his ★ album – and also anchored by saxophonist Donny McCaslin’s watertight jazz ensemble – these three songs inevitably share some stylistic and textural flourishes, although they feel more like friendly cousins than long lost siblings.

Certainly, compared to the melodic wizardry evident on ★, “No Plan” is relatively traditional; closer perhaps to ★’s closing tracks, “Dollar Days” or “I Can’t Give Anything Away”. A reflective, melancholic song, its melody is carried by McCaslin’s sax line and Jason Lindner’s gentle synth bursts, underpinned by Mark Guiliana’s shuffling drum beat. It feels strangely unassuming – more about creating atmosphere than breaking new ground, sonically speaking. Then Bowie’s voice kicks in, soaring above McCaslin’s sax in a high-flying moment of grand theatricality – perfect, you might think, for an off-Broadway production. But it is reminiscent, too, of vintage Bowie: the warm, soulful tones recall “Word On A Wing” or even the vocal sweep of “Loving The Alien”. “There’s no music here, I’m lost in streams of sound,” he croons, beautifully.

“Killing A Little Time”, meanwhile, feels akin to the harmonic instability of “Sue (In A Season Of Crime)”. Led by a chunky guitar riff – the kind of thing Earl Slick might have ground out for The Next Day – it pushes deeper and deeper towards chromatic hinterlands. Built from dense, arrhythmic layers – from which McCaslin’s malevolent skronking is often the only discernible instrument – it underscores the solid collaborative work accomplished between Bowie and McCaslin’s ensemble and the questing nature of Bowie’s own compositional ambition. “I’ve got a handful of songs to sing, to sting your soul, to fuck you over,” he exclaims haughtily.

Although Tim Lefebvre’s walking bass-line on “When I Met You” offers a more convivial rhythmic foundation, things soon change. Bowie multi-tracks himself, singing a melody in counterpoint; there are processed drums, synth washes, with Bowie himself on guitar and a furious, foot-stomping chorus. This tumultuous backing is matched by his increasingly deranged vocal performance. “The marks and stains could not exist when I met you,” Bowie sings, “Now it’s all the same, now it’s all the same, the sun is gone, it’s all the same”. And then he, too, is gone.

Perhaps because they exist to fulfil a different creative purpose, these three songs don’t feel quite as layered or allusive as their ★ counterparts. Rather, these songs were always intended for Lazarus: a different entity altogether from ★, where ambient-prog-electronic-soul marathons or inscrutable lyrics are not necessarily the order of the day. Impressively, Bowie juggled these two wildly different projects simultaneously: by day working with McCaslin’s ensemble on some of the most far-reaching and experimental music of his career and by night working with arranger Henry Hey – a compatriot of McCaslin – retooling old hits for a jukebox musical.

What, then, are we to make of the Lazarus album? Historically, Bowie has always made his best music with his eyes fixed straight ahead, yet here he is looking back – to old songs and an old character, Thomas Jerome Newton, the man who fell to Earth. Admittedly, without seeing the play – which officially opens in London on November 8 – the soundtrack feels an incomplete experience. At its most successful, Lazarus finds new ways of presenting well-known songs; an unenviable task for Hey and his seven-piece band. A minimalist take on “The Man Who Sold The World” is rendered in lithe bass strokes and ambient synths, while “This Is Not America” is bathed in delicate, autumnal tones. There are some surprises, too: a pleasingly light-footed “Absolute Beginners” emphasizes the original’s upbeat qualities, “All The Young Dudes” has a loose, greasy vibe while “Always Crashing In The Same Car” feels pleasingly strange and imperious.

Sometimes it doesn’t work. “Changes” starts off as a ghastly piano ballad – think John Lewis Christmas ad – before bursting into an all-singing, all-dancing chorus line number. Elsewhere, “Lazarus”, “It’s No Game (No 1)” and “Where Are We Now?” are played with a straight bat, faithful to their studio originals (although it takes two guitarists, Chris McQueen and JJ Appleton, to replicate Robert Fripp’s demon runs on “It’s No Game”).

The most theatrical song here is “Life On Mars?” – coincidentally, the current Legacy compilation includes a new mix of the song by producer Ken Scott, which removes the drums and guitars and makes explicit its suitability as a future showtune. The closing track “Heroes” is understated and melancholic, driven by a typically modest vocal performance from Michael C Hall, playing Newton. Hall shares vocal duties with several other key cast members – principally Cristin Milioti and the 15 year-old Sophia Anne Caruso – although Hall cleaves closest to Bowie’s baritone: not an impersonation, but he captures Bowie’s inflections and phrasing.

If Nic Roeg’s film The Man Who Fell To Earth featured Bowie but none of his songs, Lazarus has the tunes while the man himself is absent. In some respects, it’s an appropriate exit: the body of work endures beyond its creator. Back in 1973, a suitably appreciative William Burroughs listened as Bowie outlined his thrilling new ventures. Backs were slapped, a mutual appreciation was born. It was a catalytic encounter that launched Bowie into a new set of creative arrangements that saw him become more disengaged, more alien: a trajectory eventually captured in The Man Who Fell To Earth. Recognising in Burroughs a kindred spirit who saw the world much as he did, Bowie exclaimed: “Maybe we are the Rogers and Hammerstein of the Seventies, Bill!” Imagine that.