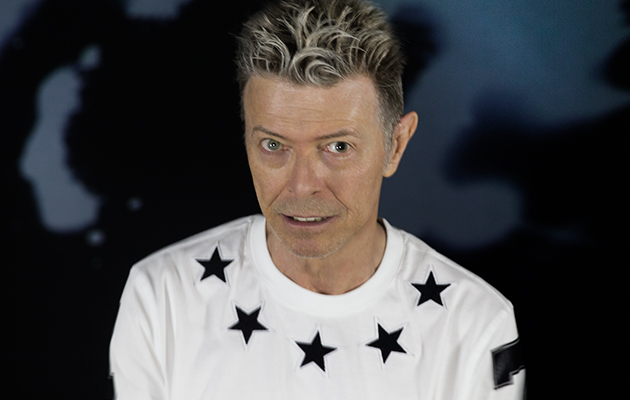 When you’ve come back from the dead, as David Bowie effectively did with his surprise 2013 album The Next Day, what exactly do you do for an encore? The sudden appearance of “Where Are We Now?” on the morning of January 8th – his 66th birthday – was a coup de theatre even by the standards of an artist with a long history of dramatic entrances. The problem is though that when you’ve pulled off such an audacious stunt once – one to rival that of Lazarus, you could say – what do you do on future birthdays? “The future,” as Bowie told NME in 1973, “is very open-ended, actually.”

The clues may have been planted in the last track on The Next Day, “Heat”: a sinister melodrama driven by eerie violin howls and eldritch electronic effects that suggested Bowie was girding himself to do the full Scott Walker. Blackstar (or, indeed, ★), Bowie’s 25th studio album, and one that will be serendipitously released on his 69th birthday, is not quite his Tilt, but it does represent yet another marvellous reinvention for Bowie. This time, working in cahoots with a brand new band, Bowie has concocted an album that is wide-ranging in scope and, critically, experimental in tone. After the relatively straightforward The Next Day, it is as if Bowie now feels free to indulge his more avant garde impulses. There are moments of challenging sonic exploration and heavy jazz-metal jams alongside a handful of astonishingly beautiful songs that find Bowie lighting up the room with some of his finest soul singing in decades. Blackstar makes reference to bluebirds, prodigal sons, and heavenly bodies. One song repeatedly inquires of the listener, “Where the fuck did Monday go?” Welcome then to Blackstar – Bowie’s latest creative Year Zero.

The roots of Blackstar lie in the 2014 Record Store Day single Bowie recorded with the Maria Schneider Orchestra – “Sue (Or In A Season Of Crime)” (you can also find it on the Nothing Has Changed compilation, released in November 2014). A seven-minute post-modern jazz experiment, the song found Bowie operating in an unfamiliar idiom with a new set of musicians drawn from New York’s vibrant contemporary jazz scene. Clearly inspired by these sessions, Bowie has conscripted “Sue…” saxophonist Donny McCaslin, whose muscular reed-playing dominates Blackstar, to act as bandleader. The 49 year-old Berklee graduate, with 10 albums of his own under his belt, fills out the Blackstar lineup with his own players: keyboardist Jason Lindner, bassist Tim Lefebvre, percussionist Mark Guiliana and guitarist Ben Monder.

Bowie has never publicly busied himself much with jazz – aside from Mike Garson’s virtuoso piano runs on “Lady Grinning Soul”, say – and his collaborations with McCaslin’s quartet feel less about getting in touch with his inner Miles and more as a means to explore new ideas. These are not just artistic decisions, so much as psychological ones. The Next Day brimmed with stylistic echoes of his previous records and was mostly staffed by familiar faces – Gerry Leonard, Sterling Campell, Zachary Alford, Earl Slick, Gail Ann Dorsey. Producer Tony Visconti remains for Blackstar, but the onus is on the new; if Bowie now wants to pursue a fresh musical agenda, surely this is best done in the genial company of new companions?

As if to underscore these intentions, Bowie deliberately frontloads Blackstar with two of its most outré tracks: “Blackstar” and “‘Tis A Pity She Was A Whore”. They’re very different songs – the former is a mind-bogglingly audacious ambient-prog-electronic-soul marathon lasting just shy of ten minutes, the latter a pounding skronkathon – but both act as defiant and divisive statements, as a bold introduction to the album’s weird logistics. Blackstar has seven tracks in total, two of which have already been out (albeit in different versions) while another is pegged to Bowie’s off-Broadway musical, Lazarus. It isn’t the first time one of his albums has been assembled from other sources: Diamond Dogs, for example, was salvaged from an ambitious plan to stage George Orwell’s 1984 as a musical; Heathen was stitched together from cover versions, new material and songs from his thwarted Toy venture.

The apparent patchwork provenance, though, makes it hard to discern overall themes from Blackstar. The violence and anger of The Next Day presented a Bowie actively engaged with the oppressive forces at work in a world to which he returned after a decade-long absence. Here, there is a less obvious thematic thread. The songs are full of narrators and characters offering a jumble of perspectives. One recounts an act of supernatural transformation: “Something happened on the day he died/Spirit rose to leave him and stepped aside”. Another negotiates a series of violent episodes: “Man, she punched me like a dude/Hold your mad hands, I cried”. A third seems to have committed murder: “I pushed you down beneath the weeds/Endless faith in hopeless deeds”. And then there is “Lazarus”, one of the four new songs Bowie has written for his off-Broadway musical – based on Walter Tevis’ original novel, The Man Who Fell To Earth – but the only one to figure on Blackstar (as far as we know). Was Bowie working on both projects simultaneously, and if so how did one feed into the other? Is he tacitly using “Lazarus” to connect The Man Who Fell To Earth to Blackstar? Or is Lazarus simply the latest in a celebrated line of starmen to appear in Bowie’s songs?

Perhaps Blackstar is unified by sound more than message. After the crunchy riffs of The Next Day, Blackstar has a more nuanced approach. Crucially, there is only one guitar solo on the album – a harsh, Fripp-like report across the album’s otherwise meditative closer, “I Can’t Give Everything Away”. For the most part, Bowie lets McCaslin and his band lead the way. On Blackstar’s reworking of “Sue (Or In A Season Of Crime)”, for instance, the free jazz textures of the original are replaced by a dense industrial thrum. It resembles a kind of jazz/metal hybrid – Bowie’s Lulu moment, perhaps? – as McCaslin drives his band towards a thrillingly discordant crescendo.

Of course, it’s not a totally new Bowie that emerges from all this. There are subtle resonances of his previous personae throughout the album. The cryptic, fragmented lyrics of “Girl Loves Me” (“Popo blind to the Polly in the hole by Friday”) seem to have been created with cut-up techniques similar to the ones he used on Diamond Dogs and later revisited via a computer programme for Outside. “Blackstar” itself shares a dark theatrical atmosphere with “Aladdin Sane” while the song’s sudden and transfixing detour into soul – with McCaslin’s sax rolling and swooping in the background – recalls the euphoric brass swells on “Sweet Thing/Candidate/Sweet Thing (Reprise)” from Diamond Dogs.

“Lazarus” – which might or might not be sung from the point of view of the musical’s resident alien, Newton – glides along with the same sumptuous, melancholic grace as Heathen’s grand centrepiece, “Slip Away”. And while “Blackstar” and “‘Tis A Pity She Was A Whore” feature some Scott Walker-ish mannerisms, Bowie’s warm, soulful timbre on “I Can’t Give Everything Away” echoes “A Word On Wing” or perhaps a less operatic take on “Wild Is The Wind”.

Bowie elects to close Blackstar with two relatively straightforward songs. They are a strong reminder, perhaps, that despite giving free reign to his experimental tendencies, he remains very capable of classic songcraft. Both vocals, delivered close to the microphone to convey a sense of intimacy, find Bowie in reflective mood. On “Dollar Days” he sings wistfully about “the English evergreens” over his own leisurely paced acoustic playing. “I Can’t Give Everything Away”, meanwhile, is borne along on soft synth washes and fleeting snatches of harmonica. An elegant, relaxed and rather touching end.

When he chose to return to music in 2013, David Bowie made his past work for him on The Next Day; a strategic move, perhaps, to help shore up his comeback and to remind a mass audience of his consistent strengths. What could have been read at the time, however, as a dignified coda to an extraordinary career now looks more like a kind of palette cleanser before new adventures. This is what Blackstar feels like: the beginning of a new Bowie phase, one that may turn out to be as uncompromising and creatively volatile as anything that has preceded it. There’s an argument that drawing on tag-lines from nearly 40 years ago is somewhat against the spirit of Blackstar. Nevertheless, one of the advertising slogans used to promote “Heroes” back in 1977 seems just as apposite today. “Tomorrow,” it read, “belongs to those who can hear it coming.”