On the road for the controversial 'Living With War' tour 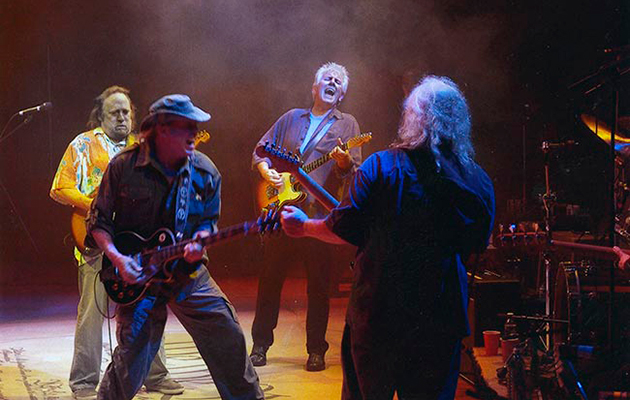 When CSNY returned to action in 2006, they found themselves fighting another unjust American war, this time in Iraq rather than Vietnam. But had they finally made peace with each other? Messrs Crosby, Stills, Nash and Young talk to Uncut about the egomania, debauchery and bush babies that ran riot in their past, and discovers whether playing Neil’s “boring-assed fucking protest music” has, finally, made them a truly harmonious quartet… Originally from Uncut’s July 2008 issue (Take 134). Words: Alastair McKay

“It’s not a democracy, it’s a dictatorship…”

Let’s say it’s April, 2006, by which time Neil Young’s simmering anger at America’s invasion of Iraq and the slaughter going on there during the subsequent occupation comes to what  you might call boiling point. In nine frantic days, he writes, records and releases Living With War, an album of coruscating fury at the Bush administration, its demented War On Terror and the havoc it’s wreaking in the Middle East that provokes an unprecedented right-wing backlash, Neil demonised by conservative ultras and the hawkish pro-Bush media. Undaunted by the fierce criticism of the record, he now thinks about taking it on the road.

Living With War had been recorded in a day, with Neil joined only by drummer Chad Cromwell and bassist Rick Rosas, plus occasional interventions from Tommy Brea’s forlorn trumpet. The songs were rough and raw, and fuelled by rage, though some of the harder edges were softened by the addition of a hastily convened 100-voice choir.

This was not a record made with a career plan in mind. It was Young working at the far edges of instinct, and with a sense of urgency he has rarely shown since the Kent State massacre of 1970 – when the National Guard shot dead four students protesting against Nixon’s invasion of Cambodia – prompted him to write “Ohio”. And, just as that record was issued immediately, so Living With War was rush-released within weeks of its recording. It was a brazen, brilliant move – reconnecting Young with his roots as a folk singer, and shattering the sense of a career drifting into the twilight.

The songs on Living With War had no room at all for subtlety. They were all about making a point and moving on. They were, in essence, punk, which makes it even more surprising that Young now decides to take the songs on the road with his former CSNY band mates, with whom he has had such a fractious history. The garage rock of his more primal backing band, Crazy Horse, would have been perhaps a more obvious fit. But then being obvious isn’t part of who Neil Young is.

There is also something pragmatically calculating about Young’s alliance with Crosby, Stills and Nash for the dates that follow in the summer of 2006. He knows more people will come to see CSNY than they would to see him solo, such is the affection – much tested, but to many still undiminished – of a band who, before they were driven apart by conflicting egos, drugs and an apparent inability to occupy the same space without soon being at each others’ throats, had assumed, with 1970’s multi-million selling Déjà Vu, the status of “the American Beatles”.

Young’s bold-faced strategy is evident when you watch CSNY: Déjà Vu – his new documentary film about what became the Freedom Of Speech tour – when it becomes clear Young made a deliberate choice to hijack a schedule that had already been booked, and then dictate his terms.

There would be room for nostalgia in the set, but only if the songs supported the mission: saving whales, for example, was off the agenda.

“We’re going to do a tour that’s focused on this type of music and this subject,” Young insisted. “We don’t want to take away from the intensity by diverting ourselves into little side trips.”

Young’s demands were precise. Nothing was to distract from the message. There was to be no loose talk, no rambling introductions to the songs, no glib statements about politics, no taunting of the president. There was to be no repeat, essentially, of the Monterey Pop festival in 1967, where David Crosby decided to use the platform to share his sincere belief that President Kennedy had been killed by more than one gunman.

In most previous incarnations in their troubled history, such discipline would have been unthinkable. But how easily were David Crosby, Graham Nash and Stephen Stills, none of them known for easily toeing anyone’s line, persuaded to buckle to Neil’s will?