Another year, another three days of fantastic music at Brighton's Dome Studio Theatre, curated by Uncut, as part of The Great Escape – this year promises perhaps the most high-energy lineup yet at Club Uncut, with highlights over the weekend including Mikal Cronin, White Fence and Allah-Las. But first, Thursday (May 16) sees Phosphorescent headlining. 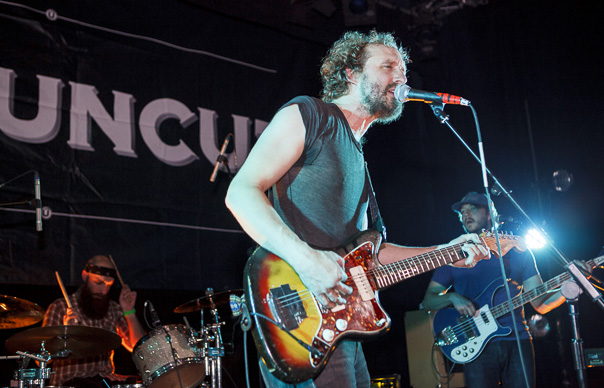 Another year, another three days of fantastic music at Brighton’s Dome Studio Theatre, curated by Uncut, as part of The Great Escape – this year promises perhaps the most high-energy lineup yet at Club Uncut, with highlights over the weekend including Mikal Cronin, White Fence and Allah-Las. But first, Thursday (May 16) sees Phosphorescent headlining.

Grizzly of beard and long of hair, it’s surprising that the openers, six-piece Red River Dialect, are Brighton-based (though originally from Cornwall, I believe). Despite origins, they certainly capture the sound of a psychedelic Old West, with singer David Morris fingerpicking delicate, Americana-tinged patterns on acoustic guitar, and his five bandmates adding spacey violin and effect-heavy guitar.

It’s a successful mix, ensuring that what could otherwise have been pastiche elements to the songwriting are transformed by the reverb- and delay-drenched textures conjured by the group. The only criticism would perhaps be that with six people in the band, including three guitarists, these textures could be even denser and more captivating. Red River Dialect win over the early crowd, though, despite a host of technical problems including a broken bass string and a faulty guitar lead, which the band battle through with wry good humour.

Solo guitarist Dean McPhee is next, and the Yorkshireman’s unshowy demeanour is in stark contrast to his impressive talents.

“Alright guys, I’m Dean McPhee,” he says, bending the microphone stand awkwardly up to his mouth, “I’m gonna play some guitar music for you.”

A slight understatement, perhaps – McPhee’s fingerpicked, effect-heavy instrumental compositions are far from standard ‘guitar music’ – the crystalline notes emanating from his Telecaster, drowned in a pool of reverb, bring to mind Maurice Deebank’s playing on Felt’s early work. McPhee performs two new, unfinished pieces, including the droney “The Red Sea”, so excited is he about his next album, and finishes with the title track to 2010’s Brown Bear album, lit by eerie red light.

Lord Huron feature the first stetson of Club Uncut at The Great Escape – sported by singer and songwriter Ben Schneider. Showcasing the euphoric country-rock of last year’s Lonesome Dreams album, the Los Angeles quintet get large swathes of the well-lubricated crowd dancing like they’re at a hoedown.

Bizarrely, though, their loop-enhanced sound is more subdued than on record, or at least smoother and more arena-ready, which to me is a shame – but don’t bet against their wordless harmonies soundtracking more TV shows (they’ve already been featured on the US version of Shameless).

Tonight’s headliner, Phosphorescent, draws by far the biggest crowd of the evening, which isn’t surprising given his consistently excellent run of records, culminating in this year’s Muchacho.

Matthew Houck is flanked by a bassist, a drummer, a percussionist, an organist and a pianist, and restricts himself to playing just simple strummed chords on his Fender Jazzmaster. Houck’s voice is as expressive and wracked as ever, especially on “The Quotidian Beasts” and “Song For Zula”, where it’s tremulous, pained and wreathed in slapback echo.

The more electronic elements on Muchacho are rendered a lot more organically tonight – synth parts are performed on organ, for example – so they fit in well with Houck’s earlier, earthier work, along with his straight and seemingly impromptu cover of Willie Nelson’s “Reasons To Quit” (the opener on Phosphorescent’s To Willie covers album).

Here’s To Takin’ It Easy’s closer, “Los Angeles”, also ends Houck’s set tonight. Already an epic on record, tonight it’s slow-burning and stunning, with powerful vocals from the whole band. The singer even takes a break from playing chords to unleash a wild, extended guitar solo, hitting his amp, conjuring shards of feedback and savaging his instrument. It’s lucky it’s the end of the night, as you’d pity the poor souls who had to follow that exorcism.