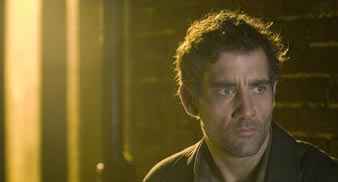 UNCUT: How far from real life do you think this is?
OWEN: Not far. I think that is the point of the movie. I think it is a very clever way of discussing things that are happening now. It is a film set in the future where the future is like now – but worse. It’s almost a warning that we have to be careful about where we are heading.

UNCUT:But there is also the feeling of hope, how important is that?
OWEN: It’s hugely important. That’s really what the film is about. There’s this sort of thing that has crept into everybody’s life now. We feel pretty hopeless about things and we’ve kinda given in to it. This film is about hope being reawakened. There’s this thing called The Human Project which is the one safe place. Everything else is chaotic, ugly, aggressive and awful. But there is this one thing that no one in the film knows for sure if it really exists. It’s a symbol of hope, a place where there’s good people and where good things can happen. The Human Project is a hugely symbolic thing in the film.

UNCUT: Can you tell us about the mental journey your character goes through?
OWEN: He’s a very unusual lead character for a movie, because for the first part of the movie he doesn’t want to be there. He’s dragged into the situation. Any opportunity to bail out, he would. Then he finds himself in a situation where he literally has the future of the world in his hands – and suddenly there’s a glimpse of hope and potential, and he wakes up and becomes engaged with the world again.