If you can't quite make it out, that’s Chuck Berry’s signature, top left in the picture above of a couple of pages from the April issue of Uncut. It was sent to me by Uncut reader Scott Ford, who lives in St Louis, Missouri, home of course to the immortal Chuck, and was accompanied by a great email that I’ve copied below. 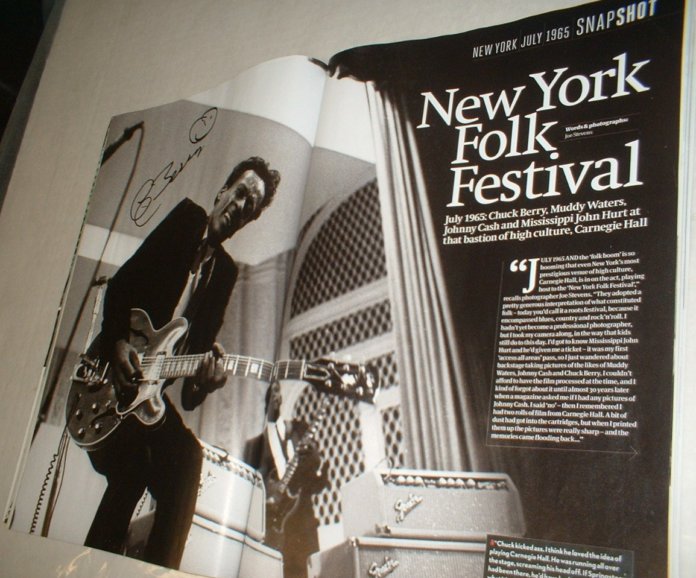 If you can’t quite make it out, that’s Chuck Berry’s signature, top left in the picture above of a couple of pages from the April issue of Uncut. It was sent to me by Uncut reader Scott Ford, who lives in St Louis, Missouri, home of course to the immortal Chuck, and was accompanied by a great email that I’ve copied below.

Scott had enjoyed our Snapshot feature in the mentioned issue, which had showcased some terrific shots by former NME photographer Joe Stevens in 1965. They were among the first Joe ever took, at what was billed as the New York Folk Festival, at which Chuck appeared with Muddy Waters, Johnny Cash and Mississippi John Hurt, who got Joe his tickets for the concert, held at Carnegie Hall.

Joe recalled how he’d wandered about backstage, taking pictures of whoever he ran into – which included in one dressing room Chuck, Muddy and Chuck’s guitarist at the time, whose name Joe didn’t know.

Cue an inspired attempt by Scott to find out who it was, by asking none other than the mighty Chuck himself. Here’s Scott’s email:

“Allan, I am emailing you from St. Louis, MO, the home of legendary Chuck Berry. I recently have been picking up the last few copies of Uncut at my local bookstore. I love the magazine and look forward to each upcoming issue.

“I wanted to take a moment out to give feedback on a feature on the New York Folk Festival held in July of 1965. I enjoyed the words and photography by Joe Stevens. Please let Joe know that on Wednesday, April 11 I had a pair of tickets to see Chuck Berry at a small venue that he plays at once a month called Blueberry Hill. At 85 years old, the man still puts on a hell of a show, but does have moments of showing his age.

“After the performance, I got the opportunity to have Chuck sign the issue of Uncut with his photo on page 60 from the New York Folk Festival. As Mr. Stevens has suggested in the story, he wandered around dressing rooms and stumbled upon Chuck and Muddy, and asked if anyone knew the name of Chuck’s guitarist who is also pictured. So, I personally asked Mr. Berry about the event and if he recalled who the guitarist was. He looked up at me with a smile and all he said was, “Sonny.”

“Unfortunately, that is all he stated. I have no clue who that is.

“It’s exciting to have had the grandfather of rock’n’roll autograph a couple of unique personal items including the April 2012 issue of Uncut. I am attaching a few photos, and again simply thought you may enjoy this story. I look forward to the next issue of Uncut, and love the layout and look of the magazine. It will be a sad day in rock-n-roll history at the passing of this man, but it will be one heck of a rock’n’roll funeral.
I wish you a great day.

After reading Scott’s email, I have to say I felt immediately inclined to investigate the possibility of moving to St Louis. Imagine getting the chance to see Chuck Berry once a month at a venue like Blueberry Hill. Hell’s teeth. Who would pass up a chance like that?

Anyway, thanks to Scott for getting in touch. Have a good week.