“Somebody better get me a fucking elevator. I’m fucking 60!” Here’s Bruce Springsteen huffing and panting into his microphone, during “Out In The Street”. He's just pulled himself up from a prone position at the top of a set of steps that lead from the stage to the pit, and the audience beyond. Later, during “Born To Run”, he’ll actually end up on his back at the top of those stairs, calling to Miami Steve Van Zandt to help him up.

“Somebody better get me a fucking elevator. I’m fucking 60!” Here’s Bruce Springsteen huffing and panting into his microphone, during “Out In The Street”. He’s just pulled himself up from a prone position at the top of a set of steps that lead from the stage to the pit, and the audience beyond. Later, during “Born To Run”, he’ll actually end up on his back at the top of those stairs, calling to Miami Steve Van Zandt to help him up. 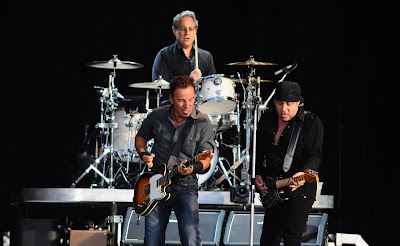 It is, perhaps, a rarity to find our favourite rock stars admitting to their advancing years. Indeed, you could be forgiven for thinking that many of them seem determined to shy away from acknowledging the passing of time at all. You only need to look at Mick Jagger, for instance, and the vigour of his stage performances and that extraordinary teenage frame to see a man clearly in denial of the fact he can now travel on a bus without having to pay for it. But, perhaps, it’s different for Springsteen and The E Street Band – who are introduced tonight as “the heart-stopping, pants-dropping, house-rocking, earth- shaking, booty-quaking, Viagra-taking, love-making E Street Band.” Certainly, with the passing of organist Danny Federici in April 2008, it strikes me as disingenuous were Springsteen and co to entirely ignore their own mortality. And, certainly, when they’re racing through a three hour-plus performance like this – opening with a breakneck version of The Clash’s “London Calling” and rarely letting the pace falter – you wonder, perhaps, just how long they can carry on doing it. Springsteen’s shirt, for instance, becomes drenched in sweat in the opening 30 minutes; one camera, shooting the band for the big screens that sit on either side of the stage, catches him between songs glugging down some juice, most of it running down his chin. It must be punishing delivering a set of this intensity.

But, of course, this is what Springsteen does – and has done with The E Street Band – for close to 40 years. In some respects, you might argue that it’s as familiar and polished as a Vegas show. During “Waiting For A Sunny Day”, for instance, he goes down to the crowd and passes the microphone to a small kid to sing along to the chorus. In other hands, of course, such a gesture might well be considered the height of schmaltz; but with Bruce doing it, it elicits a soft sigh from the crowd (many of them parents themselves, of course). There’s plenty of Looney Tunes-style comedy mugging, too, principally between Springsteen and Maimi Steve; during “Rosalita (Come Out Tonight)”, Steve seems to be complaining to Springsteen about Nils Lofgren taking an extended guitar solo. Clarence Clemons, too – with his Predator dreads – gets a cheer every time he plays a sax solo; and an even bigger one when he whips out a penny whistle on “American Land”. It’s all very convivial. Equally, Springsteen is more than happy to spread the love to a younger generation; earlier in the day, he’d already joined the Gaslight Anthem on stage for their song, “59 Sound”, and now he invites their singer, Brian Fallon, to join in for “No Surrender” (they’d done similar in Glastonbury).

“It’s still early!” bellows Springsteen at 9.45, 15 minutes or so off his curfew, as the remaining wisps of blue disappear into the night sky. The set winds its way through rousing, singalong versions of “Born To Run” and “Jungleland” to “Glory Days” and “Dancing In The Dark“. It seems highly likely he’d have carried on playing all night – but, alas, there was no “Born In The USA” or “Thunder Road“. Of course, you might wonder whether Springsteen will still be belting out sets like this in 10 or even 5 years time. But until such time as he decides to hang up his work shirt, cowboy boots and Telecaster, we should continue to enjoy shows of this calibre.