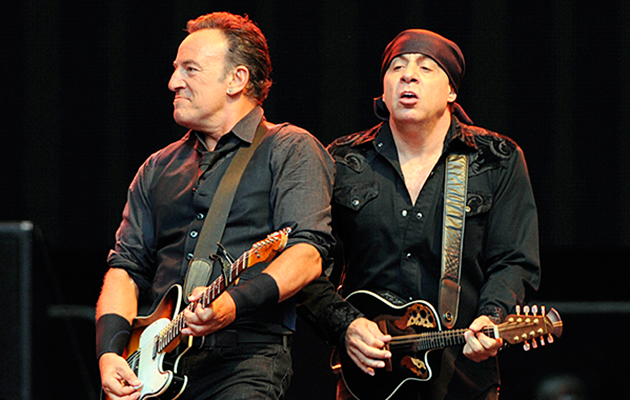 As “Knockin’ On Heaven’s Door” fades out on Wembley’s in-house radio station, the DJ informs us that Bruce Springsteen will be on stage in 30 minutes. He tells us that a fan called Dave has Tweeted from the stadium floor to say that it’s 26 degrees in the Venue of Legends. Back in his booth, the DJ cues up another track: “More music now, from Sting.” Meanwhile, TV screens inside the cavernous stadium corridors play an advert for a mobile phone network on repeat, where Kevin Bacon walks through the same cavernous stadium corridors before bursting out onto the pitch itself.

At 6.15, Bruce Springsteen walks casually onto the stage, saluting the crowd with a bellowed “Hello, Wembley!” Swerving back to the piano, he opens tonight’s 33 song set with “Does This Bus Stop At 82nd Street?”, a comparative live rarity dating back to Springsteen’s first formal studio audition for CBS back in 1972. The E Street Band arrive for another deep cut: “Seeds”, from the Born In The USA sessions. At which point, it seems like all bets are off.

But the River tour has been remarkable for a number of reasons. Springsteen’s first tour since reuniting the E Street Band in 1999 that hasn’t been tied to a new album, it is an undertaking that seems almost to have happened by accident. Originating from the idea to support The Ties That Bind: The River Collection with a couple of shows, it has since blossomed into a full-blown 37-date American tour. Along the way, it has added 28 European dates before looping back for a final 10 shows in the States. All that is stopping it, presumably, is the publication of Springsteen’s autobiography, which is released on September 27 – 13 days after the final River date. The proposition of the tour has changed, too. What began as a plan to play The River in its entirety, complemented by a selection of catalogue cuts has now become a broader celebration of Springsteen’s songs, with tracks from The River album at its core.

It’s possible to view the original iteration of The River tour as a reflective experience for Springsteen. The album itself was written at a turning point in his career, the first time he really grappled with the challenges of adulthood. As he told biographer Dave Marsh in 2004: “I finally got to the place [with The River] where I realised life had paradoxes, a lot of them, and you’ve got to live with them.” The album gave Springsteen his first No 1 while the original 1980/1981 River tour represented Springsteen’s first major foray into Europe – including a six-night stand next door, at Wembley Arena. The tour also took place in the shadow of Reagan’s election of John Lennon’s assassination: it’s hard not to find strange, historical resonances today, as America similarly readies itself for an election and Springsteen and the E Street Band also pay homage to other, departed icons. Tonight, “Tougher Than The Rest” is dedicated to Muhammad Ali.

Although the number of River songs has been cut back – from tonight’s set, only 5 come from The River – nevertheless the album continues to exert an influence, however subtle that may be. The album comes closest to outlining the span of Springsteen’s live show – the perennial themes of togetherness, hope and redemption played out as upbeat rockers, soulful testifying and moments of somber reflection.

“Seeds” appears key to the tour’s stripped-back line-up: a lean, muscular garage rocker that features a surprisingly vicious guitar solo from Springsteen. It is followed in quick succession by “Johnny 99”, which maintains the thrilling power of “Seeds” but manages to add fiddle, guitar, cowbell and sax solos. The run, then, continues through “Wrecking Ball”, “The Ties That Bind”, “Sherry Darling”, “Hungry Heart”, “No Surrender”, “Candy’s Room” and more, each one kick started by Springsteen before the previous song has properly finished. It’s 12 songs before he pauses to take a breath, for “I’ll Work For Your Love” – a sign request from the audience. There is an opportunity here for more comedy – he starts off on the wrong harmonica, fluffs the intro, squints into the crowd, looking for “the card with the chords”. It is followed by “Spirit In The Night”, and some terrific messing about: this time, he helps himself to a pair of glasses and a conical silver hat from audience members as he works his way along the crowd barrier. He ends up taking a pint from a girl at the front and downs it. The jollity continues with “Out In The Street” and “You Can Look (But You Better Not Touch)” before taking a swerve into darker territory.

The run of songs that consists of “Death To My Hometown”, “American Skin (41 Shots)”, “The River” and “The Promised Land” are among Springsteen’s finest moments. Certainly, the narrative strengths of “The River” are undiminished with familiarity or the passing of time: a perfect short story set to music. The power of these songs, nestled in between more rousing stands, feels central to Springsteen’s observation about life’s paradoxes: rock’n’roll can be celebratory, but it can also be used to explore the kind of weighty issues detailed in this cluster of songs.

There are customary set-pieces. The walkabouts – which begin as early as “Johnny 99” – the sign requests, whooping cheers whenever Jake Clemons takes a sax solo, and on “Waitin’ On A Sunny Day”, he plucks a child from the audience to sing along. He sees her waving a placard reading “I’ve got school tomorrow but tonight I’m waiting on a sunny day”. It’s evidently too good an opportunity to resist. The main set concludes with “Because The Night”, “The Rising” and “Badlands”, which showcase the key themes in Springsteen’s songs: romance, politics and the search for a better life.

The River tour marks an interesting point in Springsteen’s career. The Ties That Bind: The River Collection is the latest assiduously curated archival box set, documenting a time when Springsteen was a young, blue collar songwriter from New Jersey trying to find his voice. It’s a theme, you imagine, that he will return to in his imminent autobiography. We can deduce that, now aged 66, Springsteen has one eye on his legacy; that this tour is part of a wider sense of the artist taking stock of his achievements. It has long been rumoured that there’s a Born In The USA box set in the works: another key point on the road to Springsteen’s success. After which, we’re told, there is a new solo album to come. What that will consist of is as yet known, but it’s tempting to wonder whether Springsteen will finally turn the focus inward and look at himself, as he passes his mid-sixties. He is almost a decade older than Bob Dylan was when he wrote Time Out Of Mind, but perhaps now is the time for a record of similar ruminative power.