When Bob Dylan played Hop Farm in 2010, it was the hottest weekend of the year and there seemed to be more people at the festival than the site could hold. There were queues for everything and queues to join those queues were not uncommon. By early afternoon, you could barely move for the people already there and the constant stream of new arrivals who added to an already considerable mass. 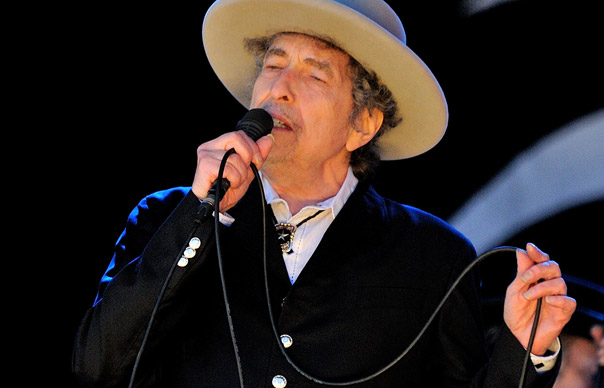 When Bob Dylan played Hop Farm in 2010, it was the hottest weekend of the year and there seemed to be more people at the festival than the site could hold. There were queues for everything and queues to join those queues were not uncommon. By early afternoon, you could barely move for the people already there and the constant stream of new arrivals who added to an already considerable mass.

Where were all those people last weekend though? The festival grounds don’t seem to have greatly expanded in the last couple of years to the extent that a crowd of a similar size to the 2010 throng might look like it’s been swallowed up in acres of extra space, so speculation would appear to be more or less correct that there’s only a fraction of that year’s total audience, perhaps as few as a third, in attendance today.

Many were no doubt discouraged from going this year because of the recent calamitous weather and a likely weekend of inhospitable bogginess, drenching rain and mud – which in the event happily wasn’t the case, the sun out for most of the day and a chill evening wind the only evidence of the currently fractious climate.

As many more absentees, you can only imagine, were somewhat put off by a bill across the weekend that seemed in some respects to have been put together in a mood of haphazard whimsy and included such apparent eccentricities as an appearance on Saturday by Sir Bruce Forsyth. The veteran trouper’s performance was less anomalous in context however, with interminable sets by Joan Armatrading and Randy Crawford further contributing to an atmosphere of end-of-the-pier light entertainment and a general mood so politely restrained it made even Latitude at cosiest seem like the worst hours at Altamont.

In the circumstances, it’s left to Patti Smith to bring things to something approaching life and introduce some much needed fire and excitement to the evening’s increasingly soporific drift. Despite a clearly valiant effort on her part to seem rousing and incandescent, her set unfortunately refuses fully to ignite. She opens with “Dancing Barefoot” from Wave, which is pleasant enough. But like “April Fool”, from the recent Banga, which immediately follows, and several other numbers after that, it wouldn’t sound entirely out of place on a Magic FM playlist, that kind of soft rock you must sometimes endure in dentist’s waiting rooms, soothing aural balm for the nervous patient. When Patrick Wolf joins the line-up on violin, you could at times mistake what you’re listening to for The Corrs.

“Because The Night” is met with inevitable cheers and is perhaps the first thing the bulk of the crowd recognise. But the highlight of her set is the last things she plays, a terrific version of “Gloria”. It’s electrifying in ways nothing else she’s played so far has been and the false ending is sheer genius, one of those moments you want to re-play immediately. This is not something I am inclined to think of the longwinded set by Damien Rice that follows, which is an exhausting thing to have to endure, the crowd’s generous applause a source of some mystery.

Veterans of what Dylan dislikes being described as the Never-Ending Tour – but which is what we continue anyway to call it – were in sage agreement that his performance here in 2010 was probably the best UK show they’d seen by him since he pitched up at Wembley Arena for two absolutely epic concerts in October 2000. Tonight, Dylan, a few faltering moments aside, such as a version of “It’s All Over Now, Baby Blue” on which he seems to lose his bearings and come almost entirely adrift from what the band behind him are playing, is in similarly imperious form.

It starts without the usual fanfare, long-serving guitarist Stu Kimball strolling on stage, already playing some sharp blues licks as one by one Dylan and the rest of his superb group join him, Dylan taking a familiar place behind his usual keyboard set-up for what turns out to be the only time tonight. With the band now all cheerfully crashing away around him, he leads them into a swaggering “Leopard-Skin Pill-Box Hat”, Dylan bopping and grinning at guitarist Charlie Sexton, with whom he seems to keep up a running joke all night, Bob evidently in great good humour, as evidence in spry little dance moves, hand gestures and the little whoops and chuckles that punctuate the song.

“Things Have Changed” is similarly and just as wonderfully playful, Dylan’s first harmonica solo of the night getting a huge cheer, as it usually does, and Bob having a ball with the song’s lyrics, phrases plucked out for sometimes hugely comic effect, and not for the fist time tonight gesturing expansively, like Al Jolson or some other fabled entertainer from a different time, head tilted back, chest out, an arm raised, palm open. Even “Tangled Up In Blue” is played with the same insouciance, the song delivered more than ever as a magnificent shaggy dog story that more than once makes me laugh out loud, Dylan’s voice full of gravel for sure, but his phrasing still often quite dazzling.

“Cry Awhile”, from “Love And Theft”, is altogether darker, a staccato 12-bar blues, with an undertow of swampy malevolence that spill over into an ominous “Love Sick”, with Dylan now at the grand piano he plays on eight of the next ten songs. Dylan’s hardly Nick Hopkins or Hans Chew, but the simple switch from electric keyboards to the grand is hugely refreshing, rejuvenating even the old war horses in tonight’ set list, especially “Highway 61 Revisited”, which sounds more spritely than it has in a while, less blustery road-house blues than blistering honky tonk.

Dylan is back centre stage with a hand-held microphone for mesmerising versions of “Ballad Of Hollis Brown”, a terrifying highlight tonight, and a hugely dramatic “High Water (For Charley Patton)”. He’s back at the piano for a majestic “A Hard Rain’s A-Gonna Fall” with a testifying final verse full of gospel fervour. If Hop Farm had a roof, it would have been righteously raised at this point.

He’s still at the piano for what may have been the set’s biggest surprise – an astonishingly brooding “Can’t Wait”, a seething, wriggling thing that more closely resembled the version that appeared on Tell Tale Signs than the one that originally featured on Time Out Of Mind. The song’s atmosphere has the sultry tang of the air before a storm, some creeping insidious shift from twilight towards a turbulent darkness, after which “Thunder on the Mountain” is a rollicking delight and even “Ballad Of A Thin Man” with its sinister echoed vocals is a relief.

The evening’s surprises are not quite over, even this late in the set. “Like A Rolling Stone”, usually dispatched with triumphal gusto, is here laced with the kind of ruefulness that characterised the reworking a few years ago of “Positively 4th Street”, while a closing “All Along The Watchtower” inclines more to the John Wesley Harding original than the Hendrix version that followed, and is equally as memorable for Dylan’s huge grin as he winds it up and takes a final bow alongside the band before heading for the wings and who knows where.