Blur: the making of The Magic Whip. “We didn’t want to tempt fate…”

The inside story of the band's new album 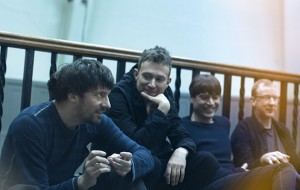 Was there an understanding that these sessions might lead to an album?

It was really loose. It was a weird one. I’m not sure whether we actually said, ‘This is going to be an album.’ We didn’t want to be that formal even among ourselves. We didn’t want to tempt fate. Really, there were no songs finished enough to warrant saying that. It was, ‘I’ve got these chords, and these other chords that go quite well.’ There were no lyrics, no melody. I suppose lines emerged, here and there. Enough for me to get some kind of grip on what Damon was saying. But it was pretty much what was coming out of his head, like what had happened on the way there from the tube. “Jordan Road, Jordan Road.” Things like that. “There’s too many of us.” Things that were quite repetitive. Some of them we worked off, we played some stuff in Damon’s GarageBand and we played over the top. I had a saxophone and I honked along. I think he was doing a lot of filming and recording of his city as well. He seems to do that quite a lot. Just leans his iPad up on the window and lets it film and record.

Do you have any specific examples?

Jordan Road, there’s too many of us… It was very general. It was only later when he managed to develop and get inside of it and experience it again, when he went out there again [in December 2014] to really make the lyrics sharp. It was pretty random, really.

It was quite hard work, it was quite intense. We’d get there late morning and we wouldn’t leave until well after tea time. It was a lot like the atmosphere that we found years ago, when we recorded at Matrix Studios in Coptic Street. We’d get into the control room and these things would happen. We’d build up a wodge of sound around these chord sequences. A lot of those went on to be on records, like “Resigned” and “Oily Water” and “Peach” and “Bone Bag”; some of my favourite old Blur songs. But Avon Studios was tight and cramped. We made it cramped, though. We had to stick ourselves behind the desk in the control room. Me and Damon were basically touching shoulders. The other side of the table Alex was there and then to his right along a bit was Dave. We were all sitting in a square shape. My amp was in a cupboard. Damon had a bunch of instruments that he likes to have around. I’m not sure whether they’re ones that were used to play live, they’re just things he liked having.

He likes the funny old Russian things. They’re things that have been used and abused even before he had them. So now they’re in a state of disrepair but they make good sounds, and I suppose that’s why he likes them. I’d just made a new Stratocaster out of two bits of wood. I had a body and neck and my guitar tech had stuck them together and said, “This’ll be a really good guitar.” He dropped some really posh pick-ups in them. So I was using that. It’s a bit similar to David Gilmour’s guitar. We all had our separate little muses. Dave had this drum kit made up that was not really set up properly and Alex had this old fat Gibson. We were all making sounds that were not particularly Blur sounds in this very un-Blur city in a very un-Blur studio and Damon was showing the local blokes how to make green tea properly. We didn’t stop. We slung a little bit of fried rice down us around lunchtime but carried on playing while we were eating. I suppose we had 15 jams that were something like 20 minutes long in the end. It was a lot of hours to have recorded. That’s the thing with anything – digital photography, recording, you do so much that to actually face organising it is overwhelming.

We recorded that, we went home. Then we got on with stuff. I had stuff going on domestically – just the boring stuff that you have to deal with. I was trying to move house. Also I got involved in writing a song for a film. Damon had a solo album, he was going to take that on the road. Time just goes. That whole thing of life getting in the way. We did have a little go at organizing a couple of the songs, like “Lonesome Street” and I think “My Terracotta Heart”. Damon had something that wasn’t called “My Terracotta Heart” and he had a chord sequence for it and I put some indie guitars on it. Then that was it again. Damon went away and it continued to bubble in its demijohn on the shelf in the airing cupboard.