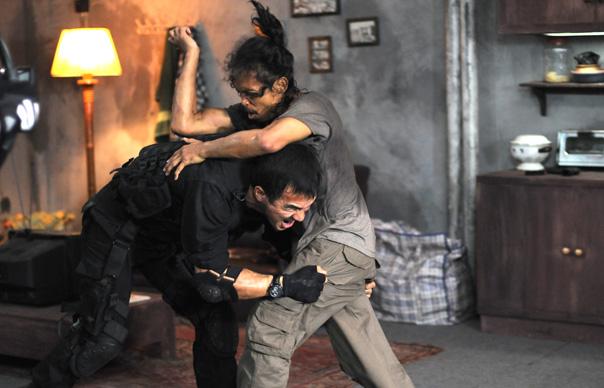 On a technical level, The Raid is a film very much to be admired. Made by Gareth Evans, a Welshman living in Indonesia, it took a year to shoot, so slow and painstaking were the fight scenes to film. And, considering the fights take up about 90% of the film’s 101 minutes, you had to commend Evans’ perseverance. Beyond that, this is basically a genre mash-up – part John Carpenter b-movie, part high concept action thriller, mostly a Martial Arts kick-em-up. The perfect grindhouse film, had this had come out 10 years ago, it would have carried a “Presented By Quentin Tarantino” slug.

Iko Uwais – in real life, a former delivery man for an Indonesian phone company – plays Rama, part of a special forces team assigned to bring down a crime lord holed up on the top floor of a 15-story apartment block in the slums of Jakarta. It’s the kind of heavy shit assignment you imagine Ross Kemp and the Ultimate Force crew deal with every week. The crime lord, Tama, looks a bit like an Asian Harvey Keitel in his Smoke/Blue In The Face Period. “Pushers, gangsters, killers. They all treat him like a god,” we discover. Early on, he shoots some folks, and goes at another one with a hammer. Inside the block, the special forces team are picked off one by one, floor by floor, by Tama’s hardcore dudes.

Complimenting his patient, meticulous filmmaking, Evans shots The Raid in forensically detailed high-definition, so you can see really clearly the damage, say, a fluorescent lighting tube causes when rammed into someone’s neck. It’s inventive, too, and Evans appears sensitive enough to the demands of Silat – his favoured Martial Art – to let Uwais and his other key performer, Yayan Ruhian, do their thing with fists and feet.
Michael Bonner