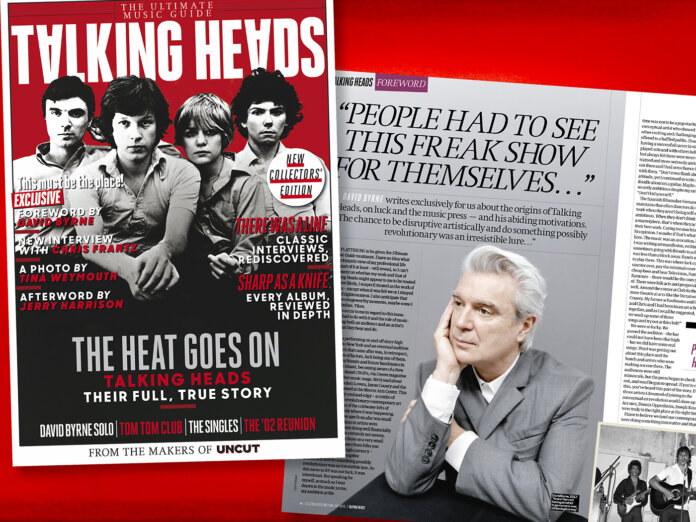 Once in a lifetime. That’s how often you expect a confluence of talents like those gathered in Talking Heads: the visionary polymath songwriter, the seasoned multi-instrumentalist, the minimalist drummer, and the bass player whose funky pulse helped drive it all inexorably forward.

And, aside from a fleeting reunion in 2002 (three days of rehearsal accompanied by their induction into the Rock And Roll Hall Of Fame), that was very much the story – a musical event never to be repeated. David Byrne left Talking Heads for an eccentric and magnificent journey through a world of music and big ideas. Jerry Harrison departed to a successful career in production. Chris Frantz and Tina Weymouth? They pursued a successful life on their own terms as Tom Tom Club, in production, and as rock’s most enduring married couple.

For this latest Ultimate Music Guide, though, we feel we’ve achieved something quite impressive. It should hopefully go without saying that the issue contains your hoped-for blend of deep new reviews of every album by Talking Heads and Tom Tom Club, and of every decade of David Byrne’s solo work, alongside a wealth of historic interviews and encounters.

But we’ve also pulled off something like a reunion. An insightful afterword by Jerry Harrison. A fun and freewheeling interview with Chris Frantz (accompanied by a snapshot of the author at his desk by Tina Weymouth). Most expansively, we can offer you a foreword written for us by David Byrne, in which he reflects on the factors which were instrumental in the birth of Talking Heads.

Luck was certainly one part of it, he confides. He is also generous enough to note that music writing had a lot to do with it, too – even the bad reviews which described Byrne as a yelping savant whose eyes bugged out. As he wryly notes, the band’s destiny was sealed: “People had to see this freakshow for themselves…”

You’ll definitely want to check it out, too. The magazine hits UK shops on November 12, but you can order a copy now by clicking here.