Every album reviewed, legendary archive encounters, and her 30 greatest songs 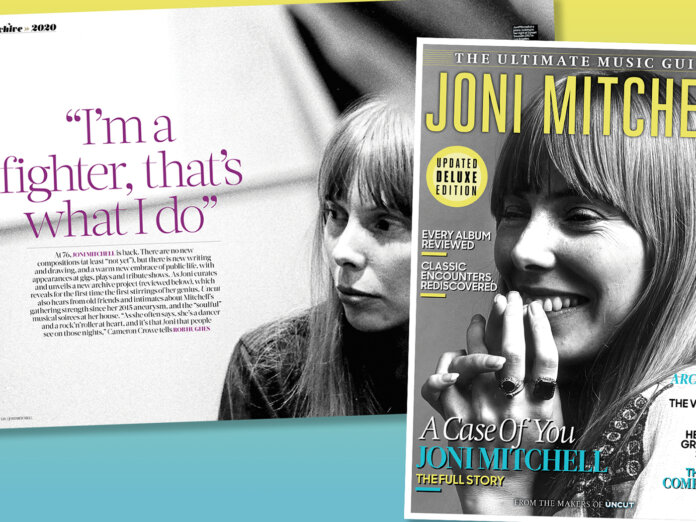 BUY A COPY OF THE JONI MITCHELL: DELUXE UMG BY CLICKING HERE

Rolling Thunder Revue: A Bob Dylan Story is a 2019 film by Martin Scorcese about Bob Dylan’s 1975-6 tour of small auditoriums which served to confound expectations, no doubt to the delight of its ostensible subject, Bob Dylan. Rather than the kind of faithful music documentary in which the director had previously specialised, the movie became a sporadically-amusing shaggy dog story in which Dylan insists he was directed throughout the tour by the mysterious “Van Dorp”.

When this wry and self-mythologising mood all gets a bit more interesting, though, it’s when Dylan is observed checking out other artists. There’s a great scene when Dylan watches Patti Smith and a stripped-down band punch through the curtain from poetry to electrifying rock ‘n’ roll. Most surprising though, is what occurs at a low-key post-show hoot session at the home of Canadian singer-songwriter Gordon Lightfoot. Roger McGuinn’s there. Dylan’s there, of course, in another surprising hat.

Centre stage, though, is Joni Mitchell. What she’s about to play, McGuinn tells us for the benefit of the tape, was written for the tour, although from our vantage point in history, we immediately recognise it as “Coyote”, the opening song on Mitchell’s sumptuous, drifting album Hejira, released in 1976.

There, the song is widescreen and graceful, and it’s tempting to think that its effortless forward momentum derives to some degree from its place in the album’s dramatic sound picture, piloted by Mitchell and the pulse of fretless bass. Here we are, though, self-evidently in Gordon Lightfoot’s dining room (with McGuinn and Dylan trying to keep up on acoustic guitars), and the song is doing much the same – moving with speed and precision through a calm and self-defined space.

It’s a scene which shows some of Mitchell’s key attributes, not least her ability to put herself at the centre of things and assume artistic control. Hers has been a career which has helped define what might be possible as a singer-songwriter: a development from folk music to the utterly original self-expression of her early records, through jazz, orchestrations and beyond.

In this Deluxe Ultimate Music Guide to Joni Mitchell, alongside in-depth reviews of all her albums, you’ll read insightful interviews and meticulous reportage on her story. It’s in UK shops on Thursday (December 10) or you can buy a copy online now by clicking here. Enjoy!