In-depths reviews and archive encounters with the reggae legend 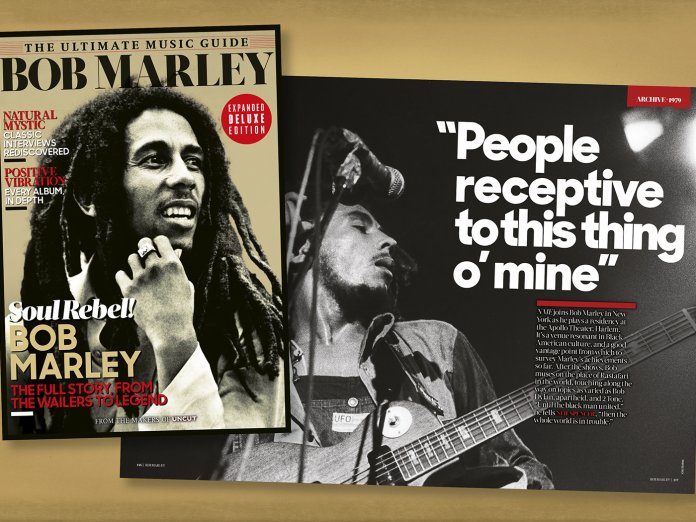 For anyone who – like me – first became aware of Bob Marley when the artist was a recently-deceased musician lately become a benign and spiritual presence over pop music, his album Legend a fixture at the top of the album charts, the story of his journey from longtime music business trier to global superstar is an utterly compelling one.

Recent celebrations of what would have been his 75th birthday have occasioned an opportunity to tell in detail the story of that remarkable transformation. As you might hope, there have been deluxe editions of his incendiary, uplifting catalogue. As you might expect, there’s been a new apparel line.

In late summer, there was also a touching BBC documentary, When Bob Marley Came To Britain, which did a great job of showing just how far Marley and the UK were interlinked. Marley at the Lyceum, and later at the punky reggae party perhaps we knew about. But Marley in Neasden in 1972? At a school in Peckham? A pub backroom in Southampton? These were perhaps less charted territories on the map of the musician’s unfolding greatness.

Our expanded, deluxe Ultimate Music Guide is your essential companion on that adventure. In addition to in-depth reviews of every album in Marley’s catalogue, we’ve gone back into the archives to uncover some of our own pivotal meetings with the man. Reporters from NME and Melody Maker became trusted witnesses to Bob’s progress, present as The Wailers laid down tracks in Kingston for what would become the Catch A Fire album (MM’s Richard Williams, in Jamaica to check out the scene with Chris Blackwell, presciently noted that this singer/composer could well be a genius to match a powerhouse like Sly Stone in the USA). A year later Williams was in London joining Bunny Wailer for fish and chips, and observing a session where Marley and band were mixing “I Shot The Sheriff”.

Much like Richard Williams, NME’s Neil Spencer first met Marley in the early 1970s and became a key conduit through which a wider British audience might come to understand something about Bob’s music and the culture which had helped give rise to it. Whether reporting from punk London, or the Harlem Apollo, Neil’s writing recounted the rapturous reception given to Marley’s music but also the problems associated with the growth of his empire – and with being a semi-religious/political figurehead presiding over a travelling Rasta court around the world.

As you’ll read here, amid the growing madness of fame, Bob’s message remained ultimately a simple and relatable one: keep your heart and your mind open. As he tells Neil in 1979: “The spirit is stronger than the flesh, which means the flesh is nothing for the spirit to carry. That mean there’s a way to live. There’s a way man, it can be done.”

Enjoy the magazine. You can get it, with free UK P&P by clicking here.