Inside the new Uncut: The Velvet Underground and our latest Sounds Of The New West CD 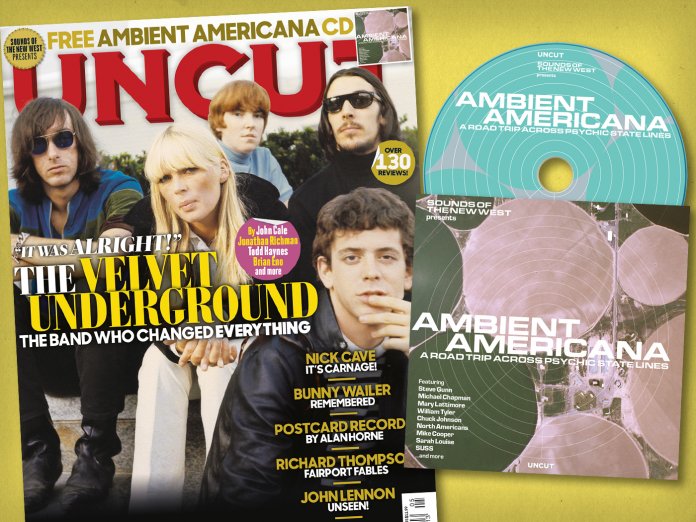 It seems several lifetimes ago now, but last March, shortly before the first lockdown began, I was lucky enough to see the Andy Warhol exhibition at Tate Modern. Inside Room 6, the curators gamely attempted to replicate the sensory rush of the Exploding Plastic Inevitable: Warhol films and still images were projected on top of one another, with coloured gels and strobe lights swirling and flickering, and the music of The Velvet Underground playing at full volume.

Have a copy sent straight to your home

With a slew of Velvets activity coming over the summer, we’ve decided to celebrate the band’s many musical revolutions with their first Uncut cover for 12 years. What’s new? Plenty. There are vivid recollections of Factory life from John Cale – his line about “loners clinging onto the vapours of others, in the hopes of being seen for the first time” is basically “All Tomorrow’s Parties” – as well as an in-depth interview with Todd Haynes on his hotly anticipated new documentary about the band. There’s Doug Yule, Lenny Kaye, Brian Eno, too, while Richard Williams revisits his own encounter with the band in a rented flat in, of all places, Knightsbridge. The high point (for me, at any rate) is a splendid, lengthy piece from Velvets superfan Jonathan Richman, who goes deep on the transition from the Cale era to the Doug Yule era. “Was Doug Yule a more conventional player than Cale?” Jonathan asks, in his own inimitable way. “Yes. But, Jimi Hendrix was a more conventional player than Cale!”

Meanwhile, eagle-eyed readers will spot that the free CD this month is part of our ongoing Sounds Of The New West series – this latest, excellent compilation showcases an emerging strand of expansive, mainly instrumental music that joins the dots between country and post-rock, experimental soundscapes. Hopefully, you’ll find Stephen Deusner’s investigations into ambient Americana a useful companion piece to the CD.

It’s a busy month – let us know what you think, either at letters@uncut.co.uk or visit us at https://forum.uncut.co.uk/.

Take care, as ever.