New material on it's way soon 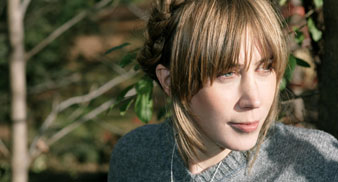 UNCUT understands your working on a new album, how’s it coming along?

Trailer Park is being re-released next month, when was the last time you listened it?

Funny you should ask actually, until last summer I don’t think I’d ever really listened to it since it came out. Obviously, I listened to it while we were making it but if I did I was always judging it and thinking about what was wrong with it. This summer was the first time I’d really sat down and listened to it unbiased and unprejudiced.

What did you think?

I thought it was really beautiful, I felt proud, well not proud, but I felt it had a lot of integrity, there’s a great deal of honesty and heart in the record, so I guess I was proud in a way. Listening to it as my older self, listening to it as a mother, as I’ve had a baby now (Ortons’s daughter Nancy was born in 2006), with more compassion I thought wow, this is a really beautiful record.

When you were making Trailer Park did you have the slightest inkling of how well it would be received?

None. Absolutely none, I had no idea at all.When I think today about all the things that have happened because of that record, how well it’s done and what a journey I’ve been on because of it.

When you were making Trailer Park did you feel that what you were doing was particularly different from what was going on at the time, was it a conscious experiment to try and mix folk music and electronica?

I didn’t want to make a straight forward folk record. Folk orientated music is what comes naturally to me but I didn’t want to be pinned in by the clichés of folk music, I wanted to be free – well not be free that sounds awful – but I wanted to be able to not be boxed into a corner. I’ve been looking back at this period a lot this last year and I think it was really liberating to push myself in the way that I did and not be held back by the pre-conceived rules of folk music. At the time it wouldn’t have sat right for me to make a pure folk album. When Andrew Weatherall go involved we gave him three pre-recorded songs and he stripped them right back, I think he used the cello as the bass on one, and I was so happy with the outcome, I didn’t think “ooo this is a bit jazzy” I was just really happy with how it sounded.

CD2 of the reissue includes 1997’s Best Bits EP featuring your collaborations with Terry Callier. How was it working with an artist like Terry?

Brilliant. It was so unusual, he’s a hero of mine but at the time I actually thought he was dead. Before we’d met I asked a friend what they were doing for their birthday and they said ‘going to see Terry Callier’ and I said ‘no he’s dead’ so they took me to the concert, I think just to prove to me that he was still alive. So I went to the concert and it was amazing, we met Terry afterwards, I gave him my CD, he liked it, we really got on together and the record company arranged for us to work together. It was a really unusual experience.

Finally, are there any performance plans on the horizon?

My main concern is to get back in the studio. I’ve had two years off to look after my daughter and I’ve got a burning desire to get back into the studio, the urge to start recording. I don’t want to think about performing again until the material’s done so we’ll see.