An interview with The Deslondes 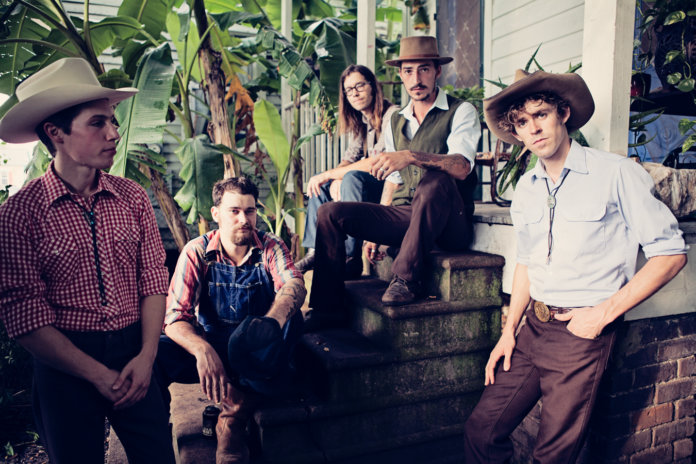 One of my favourite records of the year so far has been the self-titled debut album by The Deslondes, a New Orleans band who mix a certain rowdy take on country with the R&B heritage of their hometown. I recently sent over a bunch of questions for them, and received these very thorough and fascinating answers: the five-piece operate as a democracy, with four of them (Sam Doores, Riley Downing, Cameron Snyder and Dan Cutler) sharing lead duties, and consequently they shared responses, too (only fiddler/steel man John James Tourville opted out)…

Can you tell us a bit about the Deslondes’ history? I mentioned you in my Hurray For The Riff Raff feature last year, but I guess a lot of people will be unfamiliar with you and your music…

SAM DOORES: We’re fibe musicians who all write, sing and play multiple instruments. We’ve all played in different formations together over the years: Broken Wing Routine (Cameron and myself) The Longtime Goners (John James and Cameron), Hurray for the Riff Raff (Dan Cutler, Cameron, and myself), and most notably – The Tumbleweeds (Riley, Dan, Myself) … which is the project that would evolve into The Deslondes.  As The Tumbleweeds we toured with and as members of Hurray For The Riff Raff for years before John James and Cameron joined the group- that’s when it really felt like it had all come together, so we changed our name to ‘The Deslondes’ – named after the street I live on in the Lower 9th ward where the band was first formed, rehearsed, wrote and recorded. Deslonde St is across the canal and a little outside the hustle and bustle of the city – it’s a peaceful and creative place to be – more a state of mind than a street.

RILEY DOWNING: The Deslondes came about after the Tumbleweeds had been together for a few years and had some line-up additions and a name change. We mostly all met at the Woody Guthrie folk fest when we were younger, except for JJ, he came to New Orleans with just a banjo when I first met him. He ended up learning any instrument you could hand him and quickly became an in-demand multi-instrumentalist filling in the gaps.

CAMERON SNYDER: We met over the years as part of a country scene that connects musicians all across the country. There are many great musicians and songwriters forming and reforming bands, and we’ve benefited from this revolving cast of talented characters. Though we’ve all been, and are, part of various musical projects, I think we’d all agree it felt pretty magical when this lineup came together. Our personalities and musical commitments complement each other. Everyone adds their own flavour, and it just feels right to play together.

The New Orleans R&B flavour seems stronger on this album than on the Tumbleweeds record. How easy has it been to integrate your country and R&B influences?… Or do you think that maybe R&B and Country music are much closer than most people normally assume?

SAM: Yes, I do think both styles are more closely connected than most folks assume. It’s been a pretty seamless transition for us. It’s hard to spend a lot of time in New Orleans without its rhythms and history rubbing off on you. So much of our favourite R&B and rock’n’roll was born here. Louisiana also has such a rich history of country music – it’s only natural that the two would mingle.

RILEY: I don’t think it was hard to integrate them, there’s always been a mixing of genres with a lot of musicians down there. If you listen to an Ernie K Doe song like “I Have Cried My Last Tear” you hear that New Orleans R&B sound, but if you play it on an acoustic guitar it flows just like an old country song. There is definitely a style and sound that is NOLA R&B but a lot of those guys grew up in the country and you can hear it in their words.

CAMERON: A lot has changed since the Tumbleweeds album (The Deslondes’ former moniker). John James and myself joined the band and added our own influences. But the relationship between country and R&B is part of a much bigger story. There’s a long history of songs being shared between country and R&B artists. Jimmie Rodgers, the father of country music, played with Louis Armstrong, who later recorded a country album; Fats Domino covered Hank Williams; Professor Longhair, Sam Cooke and Al Green all covered country songs. Maybe the most obvious example is Ray Charles’ “Modern Sounds In Country And Western,” an album that’s been hugely influential for some of us. These genres are so closely related musically; historically, the distinction between country and R&B was based on race rather than differences in the music itself.

Some people would accuse our scene of producing music that’s anachronistic, or call us throwbacks. But country, R&B, blues and jazz have been interacting and producing new forms for decades. Nothing’s completely new; nothing’s completely old either. That’s how music forms are born: influences come together, diverge for a while, and then recombine. The current Americana scene is just another moment of influences converging. Given that, our music is too varied to be a straight throwback. Our blend of country and R&B is influenced by all the styles American music came into contact with along the way: reggae, hip-hop, Cuban music, punk, you name it.

DAN CUTLER: I’d say we have a very interesting story for people that are interested in band stories. There are even some life-altering coincidences in there. It is a long story with lots of details, though. It can be summed up as a band of disparate (or desperate) parts that came together and grew up in New Orleans. With more than a little help from our musical friends, of which there are too many to list off for this interview.