An Audience With… John Paul Jones

The Led Zeppelin legend has just returned with a new group, Minibus Pimps, in collaboration with Deathprod, aka Norwegian Helge Sten. Here, from Uncut’s April 2010 issue (Take 155), is a look back at the bassist and multi-instrumentalist’s other jobs… Fans and famous admirers ask Jones about his favourite instruments, bluegrass, working with REM, the Butthole Surfers and Josh Homme, and being “a bloody good choirmaster”. Interview: John Lewis ___________________ 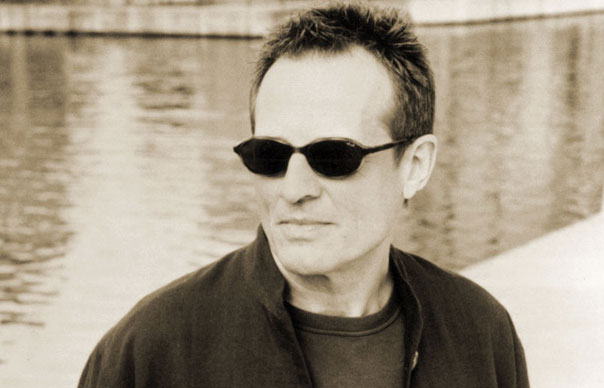 The Led Zeppelin legend has just returned with a new group, Minibus Pimps, in collaboration with Deathprod, aka Norwegian Helge Sten. Here, from Uncut’s April 2010 issue (Take 155), is a look back at the bassist and multi-instrumentalist’s other jobs… Fans and famous admirers ask Jones about his favourite instruments, bluegrass, working with REM, the Butthole Surfers and Josh Homme, and being “a bloody good choirmaster”. Interview: John Lewis

Them Crooked Vultures are not so much a supergroup, more an entity whose abundant concentration of power suggests that they should be investigated by the Monopolies Commission. Yet, even alongside Dave Grohl and Josh Homme, it’s bassist John Paul Jones who remains the true rock legend, a man who has sold somewhere in the region of 200 million albums worldwide with Led Zeppelin. But the man born John Baldwin in Sidcup 63 years ago has had a significant career outside of Led Zeppelin. Before he met Jimmy Page he was a jobbing teenage session musician and arranger around London in the mid-’60s, nearly joining The Shadows (aged 17 – he was deemed too young) and backing everyone from Rod Stewart to Shirley Bassey. Since Led Zeppelin disbanded he’s had a busy career writing, arranging, producing and performing with the likes of REM, Peter Gabriel, Brian Eno, the Butthole Surfers, Diamanda Galás and Paul McCartney. He also got to know Dave Grohl, orchestrating the strings on some Foo Fighters tracks, and now finds himself on a mammoth world tour with him. Now, after a frenetic show at the Wilton in LA (“my ears are still hissing a bit,” he says) he’s ready to answer your questions…

Your stuck on a deserted island, you have one instrument you can bring. Is it: a) piano b) bass or c) mandolin?
Gary Attersley, Ontario, Canada
Oh… that’s horrible! I’ll probably get Hugh Manson – the guy who builds all my bass guitars – to build me some monstrous instrument that encapsulated all three! Hugh and his brother Andy Manson once actually designed me a triple-necked guitar with 12-string guitar, six-string guitar and mandolin on it! Andy also designed a triple-necked mandolin. But I guess if it really came down to it on a desert island, it would have to be the piano, because you can do so much on it. You’re a whole band. The bass is not much fun on your own.

John, it’s so good to see you so engaged with today. Any advice for old farts who can’t move on?
Andrew Loog Oldham
Who are you calling an old fart? I dunno, Andy, you tell me! Ha ha. He’s done a good job of staying up to date. Andrew, of course, gave me the name John Paul Jones. I was John Baldwin, until Andrew saw a poster for the French film version of John Paul Jones. I thought it ’d look great in CinemaScope, as I wanted to do music for films. I imagined it saying “Music By John Paul Jones”, over the whole screen. I never realised then that he was the Horatio Nelson of America!

I know that you’ve been getting heavily into bluegrass lately – who are some of your favourite bluegrass artists of all time?
Ryan Godek, Wilmington, Delaware
Apart from Bill Monroe, you mean? Oh, there’s loads. I’m friends with the Del McCoury band, I love that style of classic bluegrass. I love Sam Bush’s Newgrass stuff. And of course there’s Nickel Creek, Chris Feely, Mike Marshall. I love it all, really. One thing I like about bluegrass is that you don’t require amplifiers, drums and trucks. You can pull an instrument out of a box and get on with some instant music making. I carry a mandolin around wherever I go. I also like the fact bluegrass musicians play more than one instrument. There’s a tradition of them swapping instruments. In bluegrass bands I swap between double bass, fiddle and banjo.

One Butthole Surfers anecdote, please?
Dave Grohl
Ha! I was brought in to produce the Butthole Surfers’ 1993 album, Independent Worm Saloon. I guess it was to give it a heavy rock vibe, but it didn’t work like that. They were actually incredibly hard-working in the studio, but I do recall running up a phenomenal bar-bill at the San Rafael studio. And then there was Gibby [Haynes, Butthole Surfers’ frontman] and his… eccentric studio behaviour. Gibby did one vocal take shouting into his guitar. He held it out in front of his face and screamed at it. Ha! He was trying to find out if it picked up through the pick-ups, which it kind of did. And that was pretty good.

How’s the violin coming along?
Sean, Berkshire
I started about three years ago. With the guitar, or the piano, you can sound OK quite quickly. With the violin, it takes much longer. Once you get past the first six months of scraping, of muttering to yourself, “What is this fucking horrible noise on my shoulder?” you get the odd musical bit, and you think, ‘Oh, this is starting to get good.’ And you continue with it for a while. I’m getting into country fiddle playing, Celtic folk songs, a bit of swing. Basic stuff, but very satisfying.

Why not record a second Automatic For The People with REM?
Franz Greul, Austria
They haven’t asked me! But doing the string arrangements for that album was a great experience, actually. They sent me the demos of their songs, and we went into a studio in Atlanta, with members of the Atlanta Symphony Orchestra. They were great songs, something you can really get your teeth into as an arranger. And I’ve been good friends with them ever since.

How did you first meet Josh Homme? And is he still a notorious party monster?
Rob Hirst, Kippax, Leeds
Well, I think we’ve all calmed down rather a lot. Dave introduced me to Josh at his 40th birthday party. It was a ridiculous themed place where they have jousting with knights. As Dave said, it was like somewhere you’d have your 14th birthday party. Or maybe even your 4th. Anyway, Dave sat Josh and I together for a blind date. Which was reasonably embarrassing for both of us, surrounded by people going “prithee this” and challenging each other to duels. But we survived the trauma and went into the studio the next day, and just started jamming. And I knew immediately it was going to be something special.

If Them Crooked Vultures had Spice Girls-like nicknames what would they be?
Paul Jones, Liverpool
Dave would be Smiley Vulture. He can’t stop grinning. Josh would be Slinky Vulture. He’s a slinky kinda guy. And I’d be Speedy, I guess. Or Jumpy. So there you go. Smiley, Slinky and Speedy. Or does that sound more like the dwarfs?

I remember you being a pretty funky bass genius back in the day! What memories do you have of those sessions?
Donovan
The sessions with Don and Mickie Most were great, because we were given a free hand. I usually got leeway, because I was the sort of Motown/Stax specialist, so producers in the mid ’60s would get me in for cover versions of American records, and none of them could write bass parts convincingly enough, so I was London’s answer to James Jamerson, I guess! And I was certainly encouraged to get kinda… funky when I worked with Donovan.

How did it feel to see Jimmy Page and Robert Plant venture off in their own project in the ’90s without mentioning a word of it to you?
Danny Luscombe, Hull
Oh yeah, I was pissed off about it. The surprise was in not being told. It’s ancient history now, but it was a bit annoying to find out about it while reading the papers. It came just after Robert and I had been discussing the idea of doing an Unplugged project. Then I’m on tour in Germany with Diamanda Galás, I turn on the TV and see Robert and Jimmy doing it, with someone else playing all my parts! I was pissed off at the time. You would be, woudn’t you? But… it’s all in the past, isn’t it?

Did you listen to much work by Josh Homme or Dave Grohl before you were contacted in relation to joining Them Crooked Vultures, and if so, how did you honestly rate it?
Ralph Ryan, Lisronagh, County Tipperary
I did like the Foo Fighters and Queens Of The Stone Age, before I’d met either of them. There’s a tendency for people – especially musicians from my generation – to say that there has been this terrible decline in musicianship, that today’s bands haven’t got the chops, blah blah blah. But that’s not true at all. There’s always some people for whom technique on an instrument isn’t necessary. They can get their ideas across without being able to have the chops. But Josh really does have the chops, he just doesn’t feel the need to flash them about all the time. In fact, there were a few riffs he gave me that I had to simplify, because they were bloody difficult to play. I really had to work at it, where he could just flick it off. He is an astonishing musician.

Were you serious when you told Peter Grant that you wanted to jack it in to become choirmaster at Winchester Cathedral?
Brian Fisher, Manchester
Ha! That was a tongue-in-cheek joke, although I was serious about leaving Led Zeppelin in 1973 unless things changed. But Peter did sort things out pretty quickly. What kind of choirmaster would I have made? A bloody good one! Listen, any way that they’ll pay you for making music is just the best situation in the world. I’d do it for nothing. I don’t care what music it is. I just love it all. The rubbing of notes together. I love it all. I would be very passionate about whatever I decided to do.

What was the worst session you ever did as a jobbing session player?
Adam Burns, Castleford, West Yorkshire
I generally have fun memories of that time. I’d criss-cross London playing two or three sessions a day, going between Trident and Olympic and Abbey Road and Philips in Marble Arch, you know. You’d be backing Shirley Bassey, Cat Stevens, Lulu, whoever was paying you. The worst experience was a Muzak session. With Muzak sessions, the music was deliberately boring. I distinctly remember one session where I embellished the bass part a little bit, just so that it wasn’t so boring for me to play. They said, “No, you can’t do that. Any interest in the music will distract people’s attention from when they’re meant to be eating.” Or standing in a fucking lift. For fuck’s sake! So I was like, “OK, thanks, bye!”